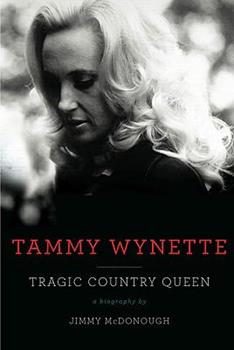 In the first full-scale biography of the enduring first lady of country music, bestselling biographer McDonough tells the story of the small-town girl whose meteoric rise led to a decades-long career full of tragedy and triumph.

The Real Thing -- When Country Music Was Truly Country

Published by Thriftbooks.com User , 11 years ago
I grew up on a farm in North Carolina, before eventually landing on Wall Street, and for me this book approached a religious experience. It's not just the story of Tammy Wynette, it's the story of a time and a place that, as McDonough says, will never come again, a time when we listened to WCKY in Cincinnati and WWVA in Wheeling, West Virginia, and country singers SPOKE to us in cheating songs, drinking songs, tales of love gone astray. At first the country charts amounted to "twenty-nine guys and Kitty Wells." Then Tammy Wynette came out of Tremont High School in Red Hook, Alabama and started singing and, said a friend, "it was like a great wind came through. Nothing was ever the same." George Jones became Wynette's third and most significant husband. "When it comes to singing," she said, "no one can touch him. They have never been able to and they never will." His drinking led to their divorce. He finally straightened himself out, meanwhile Wynette became addicted to painkillers. She died in her 50s, and in pain. There's a lot of great music described in this book, and a lot of sadness. But then isn't that what country music is all about?

Published by Thriftbooks.com User , 11 years ago
Those four words above describe the new book. The author has done his research extensively and backs up his claims with his resources. Tammy Wynette was a very complicated woman, looking for the idealistic life. She did not find it in this life. Up to her death she was constantly looking for that "Elusive Dream"....that ideal "love". The author is incredibly fair in his assessment of Wynette's character. He pulls no punches. She was not a perfect human being and he does not portray her as one. She says she embellished the truth to make it more exciting. He has also conducted an extensive array of interviews with Don Chapel (Tammy's second husband), Tammy's close friend and pal growing up, Linda Cayson, Chapel's daughter, Donna, George and Nancy Jones, Wynette Biographer Joan Dew, Loretta Lynn (Tammy's best girlfriend in the music business), Jan Howard and many, many others. He also gave George Richey a chance to tell his story but he declined to be interviewed. This book also contains a great career retrospective and a great chapter on Billy Sherrill, Tammy's long-time producer. True, this book does not portray George Richey in a good light....but the author is fair as he gets quotes here from RIchey's defenders. Unfortunately, RIchey's defenders are in the minority. When all is said and done, the final analysis here is that Wynette was, like Judy Garland, an addictive personality who had to be under the control of a man....well she got what she wanted.....there was no one more controlling than George Richey. There are several testaments here to the fact that Tammy loved her daughters and her daughters loved her. No, their relationship wasn't ideal (what is???), and after she married Richey, he made sure he eliminated all of Wynette's friends from her life and kept her daughters from her at arm's length. I firmly believe after reading this account that George Richey was responsible for Wynette's decline. She was already in bad shape, he saw this, saw his meal ticket and ultimately, made sure that she could not function without drugs or without him. Sad, sad, sad. Read this wonderful account and make up your mind for yourselves. I thoroughly want to commend Jimmy McDonough, the author, for his wonderful research, his remarkable telling of every side of the story and what was ultimately a labor of love for him.

Published by Thriftbooks.com User , 11 years ago
Absolutely fantastic, marvellously written bio on larger than life but much overlooked country queen. Even if you have just a passing interest in C & W or Wynette this book will carry you away simply because it's so well written. Clearly a fan, the author is not afraid to pass some just critisism on some of her recordings or pass judgement on some of the stuff she pulled in life. Even better the book gives some great insight into how the Nashville industry worked in the 70's,growing up in the South and the way women were viewed (there was a whole lot more to Wynette than just a doormat who would stand by her man.)Even better the book will have you run to the nearest record store to buy and listen to what McDonough writes about.You'll be in for a surprise though because apart from the obligatory greatest hits selections there's very little there. Sony/Legacy has criminally overlooked Wynette's 70's albums.Check the second hand record stores instead or check Ebay.You won't be dissapointed there's tons and tons of fantastic songs to be found. And ofcourse those album covers. Read, listen and enjoy!

Published by Thriftbooks.com User , 11 years ago
"Tammy Wynette: Tragic Country Queen" is an exceptional biography on one of music's most beloved singers and one of the most popular female country acts Nashville has ever produced. Jimmy McDonough documents Tammy's humble beginnings in Mississippi where her dream was to be as big a star as one of her idols, Patsy Cline. She was married five times in her life, often in tumultuous relationships, the most popular to George Jones in which the marriage produced a daughter. The marriage ended in 1975 due to Jone's severe bout with alcoholism. Tammy also had three other children. In this book McDonough details in articulate account how Tammy made it in Nashville, a man's world in the 1960's, and her ultimate encounter with record executive Billy Sherril who got her to record her first hit "Apartment #9". After that record Tammy suddenly became a household name, winning three consecutive Female Vocalist of the Year Awards starting in 1968 and winning two Grammy's. The highs and lows of Tammy's life are here, from the times she would perform for Presidents to her severe health problems to her untimely death in 1998 when the world was shattered by losing her. A better than average country music biography, Tammy's close friend and fellow artist Dolly Parton is interviewed and she offers personal insights into Tammy's life and career.

An awful life behind an awesome voice

Published by Thriftbooks.com User , 11 years ago
With a voice that cut through the noise of modern life as clearly as a champagne glass tapped with a silver knife at a wedding reception, Tammy Wynette touched the hearts of millions of Americans and left them better for having heard. It's doubtful any American during the past half-century was not stirred by 'Stand By Your Man' which, like 'D-I-V-O-R-C-E' became her defining signature. These songs are an opera within themselves, a "sound bite" that defines the hopes and fears of millions. Wynette's crystal voice soared above the noisy chatter of everyday life with a clarity that could only be envied by everyone who wants to speak to the public. Her voice was awesome. What then of the woman around that voice? This book says the answer was a ceaseless relentless merciless obsession for perfection, relevance and acceptance that eventually destroyed the mind and body that housed it all. If heartbreak and tragedy are the price of fame; then, Lord God, Wynette paid the price in full. She sought too much from life. In so doing, she trusted too many erratic husbands and too many selfish advisors who placed their own interests first instead of Wynette's best interests. As Wynette said after one divorce, "If ever a home was broken up by outsiders, it was ours." McDonough points out, "Contrary to the legend, Wynette did not crawl out of abject poverty . . ." As she said on one occasion, "I have always gotten everything I ever wanted, but I didn't get what I needed." The "poverty" legend became poart of the glitter of her life. Dolly Parton once summed it up her own background nicely by telling an interviewer, "Well, you didn't live in the country and nearly starve to death." For Parton poverty was very real, and she included Wynette with humour ". . . me and Tammy, we got our clothes from Fifth and Park -- that was, the fifth trailer in the park." All in all, this is a fateful plunge into the world and mind of an ambitious, brilliantly talented and relentlessly striving woman from the Mississippi/Alabama border region who was never able to handle the success she sought and won. Her fame was such that gave her no rest, and she never learned to hide the worry and fear that left dark circles below her tired eyes. Wynette was one of the great voices of American music; her personal life was one of the great self-inflicted tragedies of the half-century. As Wynette once said, "I believe you have to live the songs." She did. In full. This book offers an intense but understanding and sympathetic story of Wynette who lived a life far beyond the triumph of her songs, and yet a life that was a tragedy and an integral part of her music.
Copyright © 2020 Thriftbooks.com Terms of Use | Privacy Policy | Do Not Sell My Personal Information | Accessibility Statement
ThriftBooks® and the ThriftBooks® logo are registered trademarks of Thrift Books Global, LLC