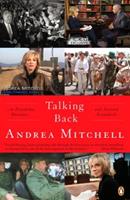 Talking Back: . . . to Presidents, Dictators, and Assorted Scoundrels

No TV reporter today is more respected than NBC's Andrea Mitchell. She's covered stories from Jonestown to the fall of the Berlin Wall, gotten unexpected answers from such interviewees as Fidel Castro and Hillary Clinton, and balanced her high-wire career with a very public marriage to former Federal Reserve Board Chairman Dr. Alan Greenspan. Mitchell's candid, funny, and riveting memoir is filled with unprecedented behind-the-scenes views of the...

Published by Thriftbooks.com User , 12 years ago
This book is thoroughly engrossing. I had always noticed Andrea Mitchell and admired her reporting, thought she was extremely articulate as well as nice-looking. I knew she married Alan Greenspan. I was open to finding out what it takes to be so tough-minded that enabled her to rise in her industry and spontaneously ask the tough questions of powerful people all over the world. But this book took me by surprise. Andrea Mitchell is fast-paced and yet so well organized that she is very easy to follow. She expresses complex thoughts that put into perspective decades of our history, as she explains her role and presence at one significant event after another. In some ways this book is a description of how to succeed in a journalist career reporting on TV, and in other ways this is a history book, describing fairly the times in which we have lived. Andrea impressed me for being able to be so fast-paced and fair-minded. She reveals herself to be extraordinarily bright and tough, and seems to have dedicated herself to her profession to the extreme. Accounts of each of the presidents she covered, and there were many, are insightful. She does a great imitation of Ronald Reagan and has interesting stories about each president. She has very complimentary things to say about each president as well as bitingly critical points. I think she treated George W. Bush differently than all the other presidents, as I waited but did not hear any positive points. Possibly the absence of even one compliment spoke volumes and possibly she was simply avoiding controversy. This was a mystery that hung at the end of the book without resolution. Surprisingly, Talking Back made me like Alan Greenspan, a very difficult man to understand even after reading his Age of Turbulence. The fact that he became committed and married to such a strong woman speaks very well for him. Andrea addressed aspects of their relationship while maintaining a fair degree of privacy, but it's worth getting this front row seat to the tough reporter's view of fitting into America's aristocracy. Plainly, this tough reporter married into the top social strata of America. She cites occasions with friends of the couple, such as Al and Tipper Gore, Dick and Lynne Cheney as well as many other rich and powerful friends. Other than some fellow reporters, the word "friend" was exclusively reserved for people of high socio-economic status. I would have liked an explanation of the friendship with the Cheneys, but Andrea provided none. The title of the book seemed a bit of a misnomer until Andrea described her visits to Cuba and interviews with Fidel Castro. I admired her for being so fair, diplomatic and yet not holding back on essential issues. I felt she represented America very well whenever she interviewed foreign leaders. It was clear that Andrea knows a lot more about many things that just about anybody I know, and her book is an authentic teaching document. For that, I am appre

Published by Thriftbooks.com User , 14 years ago
This is a fabulous read...you can hear Andrea speaking as you read ...descriptive, exciting and historically fascinating.

Published by Thriftbooks.com User , 15 years ago
Many of this book's reviews complain that Mitchell's autobiography is more history than memoir. That's totally true, but here's why I think she can get away with it--almost: Andrea Mitchell is a journalist. Unlike many journalists now who love BEING the news instead of REPORTING the news, Mitchell maintains the highest journalistic standards and I think her book shows that. Unfortunately, it makes for pretty terrible autobiographical writing. The reason she can almost get away with it is because her bad autobiography shows in the most obvious way what a great journalist she is! Let me put it another way: Mitchell's trouble writing about herself shows how ingrained the sense objectivity is in her (not that any writing is ever purely objective, but I digress.) As someone born in 1981, I honestly enjoyed Mitchell's history of what made the news since the sixties--it's pretty interesting and well-written. I guess the problem is that I bought a book about Andrea Mitchell, not history. The sense of self-censorship really overpowers the book; Mitchell is ridiculously guarded. She's insightful about everything except herself! In the end, I had fun reading her "memoir" and I think her difficulty writing about herself actually does reveal a lot about her. I think also that it might have behooved her to wait until retiremement--or whatever her version of retirment will be--to write her memoir. Maybe she'll give it another shot, and we'll see a more revealed Mitchell. But hey, I liked it anyway.

Published by Thriftbooks.com User , 16 years ago
Andrea Mitchell is journalism's equivalent of Woody Allen's "Zelig" -- every time something big happens...she is there. This book is packed with the inside story of lots of stories. She tells about the hard work that got her to the top of broadcast journalism. Unlike some of the young reporters populating the cable news networks these days -- she clearly got where she is by the dint of her energy and smarts. This book should be required reading in journalism schools around the country.

The View from a Washington Insider

Published by Thriftbooks.com User , 16 years ago
This is kind of two books in one that match Ms. Mitchell's two roles in life. On the one hand, she is an accomplished newscaster having worked for NBC news for thirty odd years. In that capacity she has mostly worked the Washington scene, close to presidents and world events. In her second role she is Mrs. Alan Greenspan of the Federal Reserve. In her first role she is standing outside the door with the other reporters waiting for the feature players to step outside and issue the news statements. In her second role she is an invited guest to the dinner party where the feature players are discussing what is to be included in the news statement. In this book she is describing how she got there from a start in New Rochelle, New York. Like a lot of super successful people, she knew from early childhood what she wanted to do. She began her career in journalism as a school reporter for her elementary school. How she got from there to covering the White House makes for an interesting story. As a professional journalist, her writing skills lift this book from the usual autobiography.
Trustpilot
Copyright © 2022 Thriftbooks.com Terms of Use | Privacy Policy | Do Not Sell My Personal Information | Accessibility Statement
ThriftBooks® and the ThriftBooks® logo are registered trademarks of Thrift Books Global, LLC