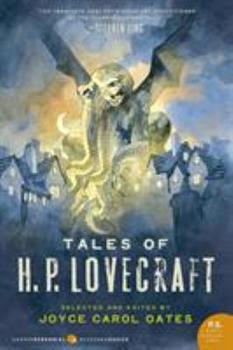 When he died in 1937, destitute and emotionally as well as physically ruined, H. P. Lovecraft had no idea that he would one day be celebrated as the godfather of modern horror. A dark visionary, his work would influence an entire generation of writers, including Stephen King, Clive Barker, Neil Gaiman, and Anne Rice. Now, the most important tales of this distinctive American storyteller have been collected in a single volume by National Book Award-winning...

Best way to get into Lovecraft

Published by Thriftbooks.com User , 14 years ago
If you're just getting into Lovecraft, this is, without a doubt, the best way to get started with your favorite old god, Cthulhu. It contains a perfect list of Lovecraft standards: The Outsider; The Music of Erich Zann; The Rats in the Walls; The Shunned House; The Call of Cthulhu; The Colour out of Space; The Dunwich Horror; At the Mountains of Madness; The Shadow over Innsmouth; and The Shadow Out of Time. You'll love every one, and crave more. If you're torn between this and the Penguin editions, I'd recommend you start with this. The three Penguin volumes are complete, but each is a mixed bag of great stories with...not so great. Go for those after you read through this.

Published by Thriftbooks.com User , 15 years ago
For those who might already have read H.P. Lovecraft, or for those who wish an introduction to this American master, Tales of H.P. Lovecraft: Major Works has assembled what is probably his best and certainly most famous stories. The editorship and introductory commentary by Joyce Carol Oates might come as a surprise to anyone unfamiliar with the fact this celebrated author was herself presented with the Bram Stoker Award, which recognizes excellence in horror fiction. While Oates' insights certainly enhance this book, they also demonstrate her far-reaching literary appreciations, and help to prove conclusively that Lovecraft, a once-forgotten pulp fiction writer, truly was among his nation's best and most imaginative storytellers.

Published by Thriftbooks.com User , 19 years ago
H.P. Lovecraft is my favorite horror writer. At his best, he is unsurpassed by any current author, including Stephen King. He creates nightmarish worlds which are uniquely his own. However, in regard to consistency, he may be likened to a pure power hitter in baseball: for the most part, he either hits a homerun or strikes out. Fortunately, most of the stories in this collection are homeruns. "The Rats in the Wall", "The Call of Cthulu", "Shadow over Innsmouth", "The Colour out of Space", and "The Dunwich Horror" are arguably five of the best horror stories ever written. Most of the others are almost as good. The one clear strikeout in the collection is "The Shadow out of Time" which I found murky, unfocused, and repetitive in style. Speaking of repetitive, a few of the stories do make you wish that Lovecraft had sprung for a thesaurus at some point: if I read the words "eldritch" or "nameless" one more time, I thought I would scream! At any rate, the collection is a good introduction to one of the true masters of the horror genre.

The contents of this book

Published by Thriftbooks.com User , 19 years ago
With so many different Lovecraft collections out there, it may help prospective buyers to know what's actually in this one:[By Joyce Carol Oates:] Introduction; [by H.P. Lovecraft:] The Outsider; The Music of Erich Zann; The Rats in the Walls; The Shunned House; The Call of Cthulhu; The Colour out of Space; The Dunwich Horror; At the Mountains of Madness; The Shadow over Innsmouth; The Shadow out of TimeThis is an excellent introductory selection of short fiction -- Lovecraft didn't write any other kind -- by one of the major figures in the history of what is nowadays called horror fiction (though a very good case can be made that, as with his idol Poe, Lovecraft belongs among the ranks of literary greats, period). Still, there are comparably fine collections available, e.g. THE CALL OF CTHULHU AND OTHER WEIRD TALES, THE THING ON THE DOORSTEP AND OTHER WEIRD TALES (both of which, unlike the collection being reviewed here, have endnotes), THE DUNWICH HORROR AND OTHERS, and AT THE MOUNTAINS OF MADNESS AND OTHER NOVELS.What makes this particular collection a marketing novelty -- indeed, why it was ever published in the first place -- is that it's edited and introduced by a well-established, much-respected mainstream literary fiction writer, namely Oates. The publisher's hope may have been that some of those who wouldn't otherwise consider reading an oldtime pulp horror writer like Lovecraft will finally give him a try, what with Oates's more widely intellectually respected name attached. As one who believes Lovecraft deserves a much higher rank in the proverbial literary pantheon than the literary establishment generally accords him, I have no complaint about trying that approach.But marketing strategy aside, the main reason a prospective buyer should consider choosing this particular collection is the moderate-length introductory essay by Oates, since the fiction selections are readily available elsewhere. The question, in other words, is: How valuable is her essay?Somewhat. It's a repackaging of her review of S.T. Joshi's LOVECRAFT: A LIFE that she wrote some years back for THE NEW YORK REVIEW OF BOOKS. In it, she makes some sophisticated observations about Lovecraft's psyche, literary techniques, and parallels with various great mainstream American writers: Little that serious-minded Lovecraft readers don't already know, but perhaps have never before seen put so well.Oates's essay, for those who care to do a search, can be found on her own site.

Published by Thriftbooks.com User , 20 years ago
Oates provides a nice collection of mature HPL stories which might be a nice introduction for everyone who has not made acqaintance with Lovecraft's work yet. Included are stories such as, The Shunned House, Rats in the Walls (great!), The Outsider, The Dunwich Horror -> mature works!<p>The stories provided by this selction are very dark, true gothic horror stories which won't disappoint any fan of the genre. Reading Lovecraft's language is like looking at a painting by Van Gogh or Da Vinci - overwhelming!<p>Lovecraft's words are very sensitive for the story they tell, very true to the heart of the darkness within, as haunting as seeing a ghost by yourself.
Copyright © 2020 Thriftbooks.com Terms of Use | Privacy Policy | Do Not Sell My Personal Information | Accessibility Statement
ThriftBooks® and the ThriftBooks® logo are registered trademarks of Thrift Books Global, LLC