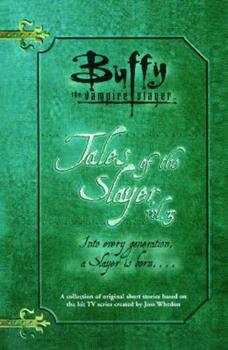 Tales of the Slayer, Vol. 3

The Slayers' lives are short, and not very sweet. The Watchers' Journals are full of their tales -- their battles, their triumphs, and ultimately, their successors. Buffy the Vampire Slayer is but the latest in a long line of women warriors stretching back to the dawn of humankind. As long as there have been vampires, there has been a Slayer. Usually called in her teens, the Chosen One leads a brief life full of conflict and doom. From the Anasazi...

Tales of the Slayer, Volume 3

Published by Thriftbooks.com User , 15 years ago
This collection is a must-have for any serious Slayer collector. Why? Because the last story is about India Cohen, Buffy's predecessor. Also, this story is set in Japan, so anyone into manga or anime will find it interesting as I did since it use some words and legends of Japanese culture. That said, let's review the other stories. The first story is set in a Native American community, and I have to say I found it rather bland and confusing. I expected more action and most of the time the story is quite predictable. The second story takes a lot of time to get to present the Slayer and by the time it does you may have lost interest in the story. It is set in China and the Slayer is not sure if she wants to be a selfish brat or a selfless savior. The watcher is a character used before by the author in another Tales of the Slayer volume. The third story is set in 1920's Hollywood and revolves around a series of murders. It is pretty good since you keep guessing who the murderer is and till the last minute the answer is not revealed. As I said the fourth one was my favorite as it combines romance, martial arts, a little bit of comedy and slayer action. This volume has the talents of Nancy Holder and Christopher Golden, two of the best Buffy novels writers.I hope this review was useful and sorry for any mistake but it is my first review ever. Thanks for reading!

Tales of the Slayer, Volume 3 (Buffy the Vampire Slayer)

Published by Thriftbooks.com User , 15 years ago
The 'Tales of the Slayer' books are a brilliant collection of short stories about the past and present slayers, including stories about Nikki Wood,the first slayer, and even some tales about Buffy herself. You may be a bit disapointed though, because this volume only contains 4 tales unlike the other volumes which contain around 8-10,but, what you will not be disapointed about is the quality of the stories inside.

Published by Thriftbooks.com User , 17 years ago
Unlike the first two Tales of the Slayer books which consisted of 8-10 short stories, this one consists of four fairly meaty novellas. The first novella was set in a Native American community in 1229. While I didn't enjoy this story immmensely, it was extremely well executed. Its the story of a slayer who was trained without understanding her calling. When she was called she still didn't understand the rules of the game. The story follows her frustration and angst and she realizes that she has failed to fulfill her duty because she doesn't understand her duty. The second story is set in China in 1856 and revolves around yet another Slayer who doesn't really understand her calling. She has been trained. But when her Watcher died she ran away from the monastery where he trained her and posed as a man to survive on her on in the city. Her new Watcher finds her and they (reluctantly) set out to destroy an extremely powerful vampire. Another excellently executed story.The third novella is set in Hollywood in the 1940s. The then current slayer and her Watcher set out to find a Watcher that has gone AWOL from the council. In the process they encounter a bar full of demons and stars, someone who is killing demons - both dangerous and peaceful - indiscriminately, and vigilante demons who want to find and punish the demon killer. This story is particularly captivating for the amount of gray in it. In this story, the slayer spends a lot of time tredding in the space between black and white, between good and evil.The final novella is set in Tokyo in 1993 and involves Buffy's predecessor, India. India is able to move freely around Tokyo with her Watcher because her parents don't have the time to pay much attention to her. She has a bit of a crush on her handsome young watcher, Kit, only adding to the dramatic tension of the story. India and Kit have been called to help a clan destroy their ancestor who was turned into a vampire, along with over 50 of his fellow warriors. Another ancestor vowed that no one in the family would rest until the vampire samauri was destroyed. But, they're running out of descendents and time. So, India is called in as reinforcements.As with any short story (or novella) collection, the topics and writing are varied. So, one story may not appeal to you simply because you're not interested in China in the 1800s or in Samauri stories. But all the stories are well written, with the well developed characters allowed by this longer form. If you're interested in exploring the history of the slayers, this collection is for you.

Despite what everyone else said, I highly enjoyed this Book.

Published by Thriftbooks.com User , 17 years ago
I really enjoyed this book. I got it last week and finished it within a couple of days. I had read the reviews that other people had posted and wasn't expecting much, in fact I was expecting it to be horrible. But luckily I'm one of those people who read what people say about things but that like to find out for myself if I actually like it.Most of the reviews have had people complaining that the book only had 4 Stories.... For the previous books people complained that some of the Stories didn't go into Detail enough... This book may have only had 4 stories but they went into Detail about their lives, instead of just their deaths or one of the many Big Battles that they Fought... Plus, it may have only had 4 stories but it was longer than the first book and I think the second Book as well (can't find the second one right now though) The first Book was only 276 pages worth of stories, the third was 319 pages worth of stories.I have to say, I liked the fact that these stories were more Detailed than the ones in the other Books. You learned more about the Slayer in the stories, who she was, what she was like, what she thought of things, how she reacted to her calling.. Etc. Etc... I really liked that.The first story, while I thought it was good it wasn't my favorite... I think that it could have been written better but I still enjoyed it. It took place in 1229 A.D... I liked the Descriptive Detail that was given of things. It was almost like you were there. They described the Smells, the way things looked and how they felt, What life was like back then and the way people lived and their Traditions, what it was like suddenly being the Slayer after waiting for many many years for it to happen... What it was like being the Slayer back then and not knowing much about the Vampires, such as their weaknesses.It kinda gave the Impression that she was the First Slayer or at least the first Slayer in a very long time... I don't know what I think about that. The Second Story I think was my favorite. I really liked the Story of Ch'ing Shih. Not only did it go into great Detail about the Slayer's Life but it went it detail about how life was for people back then... In particular women... It went into detail about how she reacted to being told that she was the Slayer. About the relationship between her and her Watcher. It also went into some Detail about her past, before being Called.... Which I really liked and enjoyed.... The way that they described the fights that they were involved in was great, I could actually picture the fights in my mind.... Again I REALLY enjoyed this story.Really quick though, to the person that said her name meant "Moon Kissed Petals", maybe the reason that you didn't like the story was because you didn't read it thoroughly... That name was a name that was used to refer to another little girl, a thief in the Tavern... Not only that but the girl who used it, made it up, it was fake. I suggest reading it again.I liked the third story as
Copyright © 2022 Thriftbooks.com Terms of Use | Privacy Policy | Do Not Sell My Personal Information | Accessibility Statement
ThriftBooks® and the ThriftBooks® logo are registered trademarks of Thrift Books Global, LLC