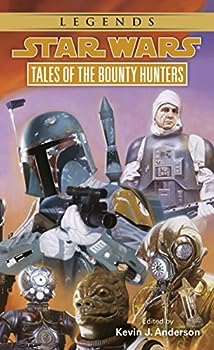 This description may be from another edition of this product. In a wild and battle-scarred galaxy, assassins, pirates, smugglers, and cutthroats of every description roam at will, fearing only the professional bounty hunters-amoral adventurers who track down the...

it all began here

Published by Thriftbooks.com User , 17 years ago
It was becuase of this book I started reading Star Wars. I saw a classmate in middleschool reading it and I knew I had to read it also. This one book started me on my Star Wars reading sage. Bounty Hunters rule! I also highly recommend Tales from the Mos Eisely Cantina and especially Tales from Jabbas Palace.

Published by Thriftbooks.com User , 18 years ago
Okay, so it's more like 4.5, but I decided to round it up because this book is just so darn good. Tales of the Bounty Hunters is an anthology containing five short stories about the six bounty hunters (Zuckuss and 4-LOM, being partners, share a story) Darth Vader hires to capture the Millennium Falcon in The Empire Strikes Back. I shall now tell you my opinion of each story, in order from worst to best (all in my humble opinion, of course). Sit back and be amazed.Prize Pelt: The Tale of BosskZzzz... This one's definitely the worst of the bunch. It was so boring I can scarcely remember what happened. Very little character building for everyone's favorite Trandoshan. Just about everything that happened to him was undone before the end of Return of the Jedi.Payback: The Tale of DengarA pretty good story, especially the ending. I found the writing to be a bit childish at times, but it was an entertaining read overall.Of Possible Futures: The Tale of Zuckuss and 4-LOMThey're getting better. I like this story more than the IG-88 one, but, in terms of overall story quality, I just had to give props to "Therefore I Am." I think this one's better, though. Just so you're not confused by the Rebels' rendezvous, as I was, the Rebels did NOT leave the galaxy. They rose above the galactic plane, but they did not at any point breach the hypothetical hyperspace barrier surrounding the galaxy.Therefore I Am: The Tale of IG-88This is, without a doubt, the best of Kevin J. Anderson's Star Wars works that I have read. Many people don't like the idea of IG-88 being the second Death Star. I don't know why. Okay, so maybe it was a little silly, but what's the harm in that? IG-88 was a megalomaniacal assassin droid, so it makes sense he'd want to control the largest and most powerful mobile weapon ever created. I wouldn't worry at all about Palpatine's apparent impotence. Remember, that part's told from IG-88's point of view, and he hates biological creatures. Once he revealed himself and tried to take control of the Death Star, I'm sure Palpatine would've put an end to his delusions of grandeur very quickly.The Last One Standing: The Tale of Boba FettAwesome. Simply awesome. This short story, the Return of the Jedi novelization, and "A Barve Like That: The Tale of Boba Fett" in Tales from Jabba's Palace are my favorite stories in all of the Star Wars Expanded Universe. It's THAT GOOD. I always said that this should be the last appearance of Boba Fett in Star Wars, but, alas, he shows up in Young Jedi Knights. Too bad. This story's ending is fantastic, just like the rest of it. Just so you know, that is indeed Boba Fett in prison in the beginning of this story. Many people say that Attack of the Clones contradicted the story presented here and rendered it invalid. Nothing could be further from the truth. This should explain everything to you: Jango Fett lived with his family. His father was a Journeyman Protector, who had taken the job after the former protector, Jaster

A must must MUST read.

Published by Thriftbooks.com User , 20 years ago
I was terrified to read this book. Here was my favorite Star Wars character, the mysterious Boba Fett, put in the spotlight in his own tale from his perspective with his thoughts and his motivations and it could have so easily collapsed into mortifying, humiliating ruin.To my utmost relief, I adored his story. Padded by two or three other excellent stories, I might add, but I should like to focus on his after reading so many unfavorable reviews of it.He is not cruel and hateful and mean, as I read him in another Star Wars book-that would set him up as nothing but a bully, and we couldn't love him then-but with his own dark sense of justice and morality that he will follow till death and-trust me on this-it fits him like a glove.In terms of writing the story is eminently good, with Boba Fett never deserting his character type. The ending does halt abruptly and leave you hanging in the worst way, but I like to think it is the author realizing that the beloved Boba Fett, the dark, mysterious, wonderful Boba Fett, does not belong to any one author, and his final destiny should be left in the hands of the respectful fans, who will know where to place him best.

Published by Thriftbooks.com User , 21 years ago
This is wonderful! All five of the stories are very descriptive, have lots of action, and just really make you feel like you are doing what the character you're reading about is doing.This book is a collecion of five short stories about the six bounty hunters that Vader sent out to find Han Solo. The five stories are the tales of IG-88, Dengar, Bossk, Zuckuss and 4-LOM, and Boba Fett.Each of the bounty hunters goes their own seperate ways, trying to find Han Solo. Though they all want to find Solo to fill their pockets with money, each of them also has seperate things to do, such as IG-88 controlling droid production, Dengar finding his true self through his cyborg mind, Bossk getting around Tinian and Chen, 4-LOM trying to take care of Zuckuss, and Boba Fett tracking down to find his enemy-and make himself be the eternal winner.I highly reccommend that you buy this, because it truly is very good. Anyone who likes science fiction would probably really enjoy this.Also, this book did not get much attention when it came out, and it still doesn't get much. As soon as I found it sitting at a book store, I knew I had to get it. I had never heard of it before, I had never seen it before, and I had never seen a review of it before. Now, I love it. It really is good.

Published by Thriftbooks.com User , 22 years ago
Some would ridicule this book because of weak plots or odd twists. But if you look at the true purposes of the book, it's very good. I believe the purposes here are to give the reader a look at what goes on inside the skull of the hunters, tell the tales from their past that made them what they are, and to bring out the personality of the hunters. Overall, "Tales of the Bounty Hunters" makes the hunters into more than just guys in the background, and it does so very well. I certainly think it's worthwhile to buy and read this book.
Copyright © 2020 Thriftbooks.com Terms of Use | Privacy Policy | Do Not Sell My Personal Information | Accessibility Statement
ThriftBooks® and the ThriftBooks® logo are registered trademarks of Thrift Books Global, LLC