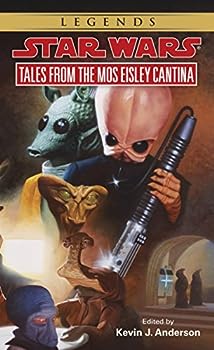 Sixteen stories from the most infamous cantina in the universe...by some of today's leading writers of science fiction. In a far corner of the universe, on the small desert planet of Tatooine, there... This description may be from another edition of this product.

Superb collection of stories from the Mos Eisley Cantina

Published by Thriftbooks.com User , 15 years ago
I think we all remember the Mos Eisley Cantina scene from A New Hope. All those different species mulling about. Now, they all have their own story in Tales from the Mos Eisley Cantina. First, I must say that this collaboration was brilliant. It appears that every author consulted with each other to ensure that if you put every single tale together to make one story, it would be seamless, no conflicting information. You get to see the scene from the movie from each character's point of view as well as learn the background story of each of them. After I read this book, I watched that scene again and now see it in a totally different light. This has been one of the better SW novels I've read. Warning: There is one (and only one) tale that is not worth reading, in my opinion-Soup's On: The Pipe Smoker's Tale. This story is worthless. There is no plot and no characterization. Just the pipe smoker at the bar talking about how he eats people's soup (aka their brains) and who's soup he prefers over others. The story is 14 pages long and is worth skipping. Other than that, the book itself is definitely worthy of your attention. May the Force be with you!

Published by Thriftbooks.com User , 20 years ago
While I am fairly well versed in Star Wars literature, this was the first of the tales books I've read, and I have to say I was impressed. It's amazing how many other struggles between life and death were going on at the same time as A New Hope. Each story in this book is excellently well crafted, and it is amazing how just about every character in the Mos Eisely Cantina scene not only had a name, but also an intire backround as to what they happened to be doing and why by pure chance they happened to be there on that particular fateful afternoon. Also, in order to read this book one doesn't have to be particularly well versed in Star Wars, unlike many of the other novels, which are practically impossible to read unless you have read every single one that takes place before it. This book only requires that you have seen the movies. The authors were chosen well too, and I recognized many of them as authors of Star Wars novels I have read. The stories are: We Don't Do Weddings: The Band's Tale, this is the story of Figrin Da'an and the Model Nodes, the band who was playing in that scene.A Hunter's Fate: Greedo's Tale, as you can probably tell from the title, this story is about Greedo the bounty hunter, and is surprising heartfelt and sad.Hammertong: The Tale of the "Tonika Sisters", at last I know what a Mistryl is! This story tells of the two women masquerading as the Tonika sisters in that scene.Play it Again, Figrin Da'an: The Tale of Muftak and Kabe, a heartwarming story of friendship and love.The Sand Tender: The Hammerhead's Tale, a sad and haunting story of an exiled Ithorian caught under the heel of the Empire.Be Still My Heart: The Bartender's Tale, ever wonder about the sweaty bartender who orders Threepio and Artoo out? this is a surprising sweet story of how even the most hardened people can eventually be reached.Nightlily: The Lover's Tale, one of my least favorites, but still a pretty interesting story, very surprising ending.Empire Blues: The Deveronian's Tale, a somewhat depressing story about the little devil guy hanging around the cantina.Swap Meet: The Jawa's tale, an interesting story of a Jawa overcoming fear to take revenge on a pack of imperials, we don't get the true outcome until we read the next story.Tradewins: The Ranat's Tale, a companion story to the previous one, have to read one to understand the other.When the Desert Wind Turns: The Stormtrooper's Tale, even Imperials are human beings, just like anyone else, learn the name of the "Look Sir, Droids" stormtrooper!Soup's On: The Pipesmoker's Tale, possible the most disgusting of them all.At The Cross Roads: The Spacer's tale, the guy who Ben talked to before Han.Docter Death: The Tale of Docter Eveson and Ponda Baba: ever wonder what happened to the guy who picked a fight with Ben?Drawing the Maps of Peace: The Moisture Farmer's Tale, a sad, but uplifting story of people like Owen and Beru.One Last Night in the Mos Eisely Cantina: a fitting finale, a

Great stories from a cantina full of "scum and villainy."

Published by Thriftbooks.com User , 21 years ago
This is the "tales" book that started it all, and what a way to start!Some highlights include: 1. We Don't Do Weddings: The Band's Tale, a funny story about everyone's favorite jizz band, Figrin D'an and the Modal Nodes. 2. Soup's On: The Pipe Smoker's Tale, a very bizarre story about how the guy with the pipe hunts down his victims...3. At The Crossroads: The Spacer's Tale is a very cool story about the guy that Obi-Wan talks to first and is directed to Chewie by. You'll love how he relates to Han and Chewie and his impressions of the strange Jedi who talked to him. 4. A Hunter's Fate: Greedo's Tale is a funny story that shows the reader how pathetic he actually was. 5. The Sand Tender: The Hammerhead's Tale is nice because it gives background info on a cantina character that was actually seen again in later Star Wars novels. 6. Doctor Death: The Tale of Dr. Evazan and Ponda Baba is great! Dr. Evazan is truly a twisted individual! 7. Drawing the Maps of Peace: The Moisture Farmer's Tale is very well written. It is about the struggles of a man much like Owen Lars who has to lay down the law with marauding Tusken Raiders.There are sixteen excellent stories in this book by some of the best sci-fi writers around. This book is a definite must-own for any Star Wars fan! Buy it now and see which tales you like the best and get your VCR ready to find all of these cool characters. Happy hunting!

Published by Thriftbooks.com User , 21 years ago
I thought that this book was just brilliantly written by a number of talented writers.I loved that I was provided with insite into all the characters backrounds from the cantina, not just the main ones.It was a wonderful book I couldn't put down once I picked it up.I loved it!

This book has some great stories in it that are worth it!

Published by Thriftbooks.com User , 22 years ago
this book is a pretty good read. If you are interested in Star Wars this is for you! Most of the stories are interesting and funny. It is an entertaining book.
Copyright © 2022 Thriftbooks.com Terms of Use | Privacy Policy | Do Not Sell My Personal Information | Accessibility Statement
ThriftBooks® and the ThriftBooks® logo are registered trademarks of Thrift Books Global, LLC