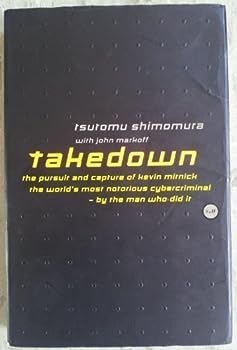 A gripping drama illuminating the good, bad and ugly of the computer world, here is the thrilling story of the ingenious capture of the Internet's most notorious cyberthief, Kevin Mitnick. Shimomura... This description may be from another edition of this product.

Very Good and Detailed look at the cyber community

Published by Thriftbooks.com User , 24 years ago
This book may have been one of the best read's ever. How ever Clifford Stoll's "The CooKoo's egg" is probably a better non-fiction book

Published by Thriftbooks.com User , 24 years ago
On Christmas Day 1995, a daring cybercriminal used a new, dangerous, and clever method to gain access to the home computer of the world's greatest computer security expert. The hero, as a matter of honor, sets out to find the devious mastermind who violated his privacy and discovers that it is none other than cyberspace's Public Enemy Number One. That's the classic version at least. Given all of the hype surrounding the capture of Kevin Mitnick (much of it created and sustained by the authors of this book), one would at least expect the version provided by "The Man Who Did It" to be entertaining. But Tsutomu Shimomura's writing (apparently not assisted enough by John Markoff) is somewhat dull. The details of Shimomura's personal life are probed in depth while technical, legal, and ethical questions are brushed over without commentary, such as the supposed proof of Mitnick's involvement in the break-in or Markoff's involvement in the capture. There may be some material of interest to the enthusiast, and those who read Jonathan Littman's The Fugitive Game should at least check out Takedown to see what all of the fuss is about.

Samurai vs the Hacker

Published by Thriftbooks.com User , 24 years ago
This book is amusing as well as educational. For Internet novices, much of the terminlogy will be confusing, but for those more techno-savy it is most informative. The ego of author Tsutomu Shimomura has been discussed in various on-line newletters, but I found the pursuit of Kevin Mitnick facinating. Shimomura is a true original, a roller-blading, cross country skiing, bicycle wheel repairing free spirit who has carved his own path as a cyper- security expert despite never even graduating from high school. Poor fugitive hacker Kevin Mitnick had no chance once this genius refugee from Princeton, Cal Tech and Los Alamos was on his trail. I am looking forward to a sequel that describes how the lives of the principal characters have changed since Takedown was published. By the way, as of March 1998, Mitnick languishes in the LA County Jail still awaiting trial after 3 years (even O.J. got to court sooner!) If any computer pros out there want to testify as an expert witness on Kevin's behalf,check out Mitnick's home page and call his lawyer.

Well written, easy to understand and hard to put down!

Published by Thriftbooks.com User , 24 years ago
A very well written book. Kept me on the edge of my seat and gave me a deeper understanding of system security, 'hacking', and capturing such criminals. This book provided good background information that should be easily understood by most people, not just computer nuts. Highly Recommended!

Published by Thriftbooks.com User , 25 years ago
The story is well written and not too technical for everyone to understand. The action flows and keep you wanting to know what is going to happen next. I just could not put this book down. I would recommend it to computer professional and non-computer literate alike. If you like detective story you will love this book
Trustpilot
Copyright © 2022 Thriftbooks.com Terms of Use | Privacy Policy | Do Not Sell or Share My Personal Information | Accessibility Statement
ThriftBooks® and the ThriftBooks® logo are registered trademarks of Thrift Books Global, LLC