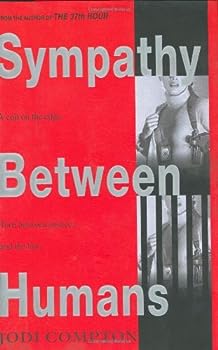 (Book #2 in the Sarah Pribek Series)

In the powerful sequel to The 37th Hour, Detective Sarah Pribek is drawn into a new investigation even as she is haunted by the case that changed her forever. This description may be from another edition of this product.

Even better than her first novel...

Published by Thriftbooks.com User , 17 years ago
"Sympathy Between Humans" cuts to the bone of police work. Hennepin County Sheriff's Deputy Sarah Pribek has more on her plate than she can deal with: Her husband, Mike Shiloh, is in jail in Wisconsin for stealing a car which he was going to use in the commission of a revenge murder "Shorty" who'd raped and killed a friend's (and Sarah's former partner's) teenage daughter. Sarah herself is under suspicion of actually killing "Shorty." Despite not being the motherly type, Sarah's gotten guardianship of a family of five children whose famous author father is incapacitated by a stroke. Her first exposure to the family was when Marlinchen, the eldest daughter, came to Sarah to help her find her missing brother, who'd been given away by their father to a family friend in Georgia. Marlinchen's brother, Aidan, eventually shows up and the mystery around him grows stronger. The family is not what they seem and the further she digs, the more dark secrets she uncovers. Finally, she's asked to investigate an unlicensed physician operating out of the local housing projects. Can she actually bust a man who turns out to be doing so much good in the projects? Sarah's choices change the destiny of several people, including her own. Sarah's going to have to face some ugly parts of her past--and potentially troublesome future in the next installations of her series. What I like most about Jodi Compton's work is that it's very realistic police procedural. No one doing any kind of casework gets things done in a linear fashion. Deputy Pribek is constantly shifting from one hot issue to another with various incidentals thrown in. 'Sympathy Between Humans" is a tough book to read, but a strongly impressive one. Jodi Compton is definitely an author to watch in the future.

Published by Thriftbooks.com User , 17 years ago
I have read and liked hundreds of books over the years, and several that I have not liked. This in the first time I have felt motivated to write a favorable review. I read and liked The 37th Hour, so when Sympathy Between Humans came out I bought and read it. I will not give a plot summary, as that is readily available elsewhere. Ms. Compton has written a book that really moves along, and that at the same time has excellent character development. I felt that she really put me in the shoes of the protagonist. As the book progressed I was concerned that it could not have a satisfactory ending without being totally contrived. (By satisfactory I do not mean that everyone lives "happily ever after". I simply mean that I can finish the book feeling very glad that I read it.) Ms. Compton concluded the book in a realistic and satisfactory manner. I am looking forward to the next book in the series.

Published by Thriftbooks.com User , 17 years ago
SYMPATHY BETWEEN HUMANS has several distinct storylines. One is the investigation into the death of the rapist at the end of THE 37TH HOUR. Sarah is under suspicion and a determined D.A. investigator is keen to make an arrest. In another storyline Sarah investigates a man in a housing project who practices medicine without a license. She seeks medical advice to trap him, but instead of arresting him, she ends up befriending him. In yet another storyline, Sarah is asked by 17 year-old Marlinchen Hennessy to find her twin brother Aidan who has not lived with the family for five years. He lived with a family friend, but has not been heard from for several weeks. Marlinchen's mother is dead and her father, a once famous author, has had a stroke. Sarah becomes a court-ordered guardian to the Marlinchen and her three brothers who live at home. As Sarah probes into the Hennessy background she stumbles on more secrets and deceit than she thought exisisted. The second novel by Jodi Compton starts a few months after her first novel THE 37TH HOUR leaves off. I highly recommend that they be read in order, which is no sacrifice since both are excellent books. Sarah is a bit of an emotional mess due to the culmination of twists in the first book. Sarah does straddle the lines of moral versus ethical boundaries within the confines of being a police detective. This book was one of the best books I have read in awhile: fast -paced, suspenseful, and very hard to put down.

An Outstanding Follow-Up to The 37th Hour

Published by Thriftbooks.com User , 17 years ago
Jodi Compton came quite literally out of nowhere in 2004 with THE 37th HOUR, a dark novel of secrets, revenge, and rough but appropriate justice. A number of questions were left unresolved at its close, making SYMPATHY BETWEEN HUMANS, its nominal sequel, a highly anticipated follow-up. It does not disappoint, and in some ways it exceeds the expectations raised by its predecessor. While SYMPATHY BETWEEN HUMANS stands fine on its own, I would strongly recommend reading THE 37th HOUR first. This hardly will be a sacrifice. The book, which introduces Minneapolis police officer Sarah Pribek, is incredibly well-written and knowing what came before will enhance enjoyment of this latest work. The novels join together almost as if they were one long story separated by bindings; my impression after reading them was that they were in fact originally written as one. Each work has its own strengths, however, and SYMPATHY BETWEEN HUMANS does not rely on THE 37th HOUR as its reason for existence. Compton keeps things moving quite nicely from the first page, creating three separate plotlines --- one dealing with unresolved matters left over from THE 37th HOUR and two new ones. The major unresolved issue from THE 37th HOUR is the pall of suspicion cast over Pribek with respect to the murder of Royce Stewart. While Pribek did not do the deed, she was present at the occurrence and certainly complicit in the subsequent cover-up. The investigation into Stewart's murder seems to have faded quietly away until Grey Diaz, a Faribault County District Attorney, emerges. Faribault County is the locus of Stewart's death. While Stewart was a waste of skin, Diaz, stuck in a quiet position with time on his hands and ambition in his heart, appears on the scene and begins pursuing Pribek as a likely suspect. Compton creates an extremely interesting situation here. THE 37th HOUR closed with the readers knowing that Pribek looked to be the primary suspect, so that the publication of SYMPATHY BETWEEN HUMANS comes with its own sense of urgency. But Compton does not let the book coast on this lone plotline. Pribek becomes involved in what appears to be the case of a runaway teenager. As is the case throughout the novel, however, there is more here than is evident at first blush. During the course of her investigation, Pribek uncovers a mystery and a secret that has lain dormant for several years. There are elements of gothic mystery here, surprisingly so, and Compton puts this plotline to good use as a contrast to the other professional and personal elements of Pribek's life. Additionally, and perhaps most significantly, Pribek is assigned to investigate the rumor of an unlicensed individual practicing medicine in an impoverished area of Minneapolis. She is able to identify the individual --- Cicero Ruiz --- fairly quickly but does not arrest him and, in fact, stalls the investigation. The passages concerning Pribek's involvement with Ruiz illustrate the extent of Compton's litera

Published by Thriftbooks.com User , 17 years ago
Jodi Compton has avoided the sophomore slump with "Sympathy Between Humans," her second novel featuring Detective Sarah Pribek. Pribek, a tough-as-nails woman who has had a hard life, is the first-person narrator. Her father was a truck driver who sent Sarah to live with an aunt when Sarah's mother died of cancer. During her adolescent years, Sarah eased her emotional pain with liquor and even suffered alcoholic blackouts. What saved her from self-destruction was her decision to become cop in Hennepin County, Minnesota. Now Sarah is a relatively new detective whose husband, Shiloh, is in a Wisconsin prison. I advise you to read Compton's first book, "The 37th Hour," before this one to get the full picture of how Shiloh landed in jail. In "Sympathy Between Humans," Sarah tackles a puzzling missing persons case. A young man named Aidan Hennessy has disappeared and his twin sister, seventeen-year-old Marlinchen, begs Sarah to track him down. When Sarah agrees to help, she finds out that underneath the wholesome façade of the Hennessy family is a complex web of lies and deceit. In addition, Sarah is under suspicion for the murder of Royce Stewart (this plot is also covered in Compton's first book) and an aggressive new investigator, Gray Diaz, is anxious to nail Sarah for the crime. Most intriguing of all, Sarah gets emotionally involved with a wheelchair-bound doctor named Cicero who helps indigent patients in a housing project. I love the multi-layered character of Sarah Pribek. She thinks nothing of risking her life by jumping into an filthy drainage canal to save a drowning boy, but she is terrified of going to a doctor's office to treat a simple ear infection. She cares for her husband, Shiloh, but she is reluctant to talk to him about her feelings. Sarah is a dogged and sharp investigator who is tough on criminals, but she is not above taking the law into her own hands to insure that justice is done. Jodi Compton pulls no punches. She shows people behaving both selfishly and courageously, and she explores the beauty and ugliness of life with intelligence, insight, and understanding. Compton knows that truth is rarely black and white, and she fearlessly explores the shades of gray. My one quibble is that Compton unwisely concludes her book with four major plot twists when one or two would have been more than enough. This flashy, over-the-top ending is exciting and unexpected, but it is also unrealistic and out-of-sync with the nuanced character development that makes the rest of the book so engrossing. Still, I enjoyed "Sympathy Between Humans," and I consider Jodi Compton to be one of the best new suspense writers to come along in recent years.
Trustpilot
Copyright © 2022 Thriftbooks.com Terms of Use | Privacy Policy | Do Not Sell or Share My Personal Information | Accessibility Statement
ThriftBooks® and the ThriftBooks® logo are registered trademarks of Thrift Books Global, LLC