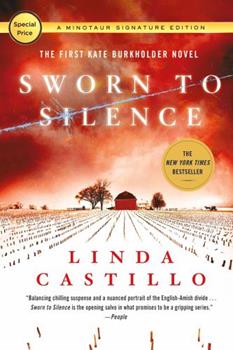 (Book #1 in the Kate Burkholder Series)

Now the subject of the Lifetime original movie, An Amish Murder Sworn to Silence is the first in Linda Castillo's New York Times bestselling Kate Burkholder series . A KILLER IS PREYING ON SACRED GROUND.... In the sleepy rural town of Painters Mill, Ohio, the Amish and "English" residents have lived side by side for two centuries. But sixteen years ago, a series of brutal murders shattered the peaceful farming community. In the aftermath of the violence,...

Published by L. Woods , 1 year ago
I've read several of Linda Castillo's Kate Burkholder books and I'm hooked. However, I wish I would have started with this book because it gives the background of Kate and Tomasetti and how they meet. This was a little dark but an excellent murder mystery. I find all of her books quick moving, easy reads, and no lags in the plot. I've also learned a lot about the Amish community through the Kate Burkholder series. It's been an interesting experience.

What a surprise was Sworn to Silence.

Published by Puzzler607 , 1 year ago
If you like murder mysteries try this one. Hard to put down. By the time I finished it I felt like the main characters were my friends. I would recommend this book and all the books of this series. All are good reads.

Published by Amanda , 1 year ago
I was skeptical when I saw it had amish people in it. Honestly I probably wouldn't have read it if my friend hadn't raved about it. I'm soooooo glad I did! This book (and series) is so well written and always has such crazy twists! I'm normally pretty good at guessing the ending, but with these I never see the end coming!

Published by Stephanie Y , 1 year ago
Not going to give it away but this book was entirely unexpected. Fantastic.

Sworn to silence is a page Turner

Published by Thriftbooks.com User , 3 years ago
From page 1 Linda has you wanting more. Sworn to silence is a book you won't want to put down. I binge read it in about a day and a half or so. The writing and detail Linda did was impeccable. Can not wait to read the rest of the series.

In the sleepy rural town of Painters Mill......

Published by Thriftbooks.com User , 11 years ago
Kate Burholder is not your usual Police Chief, being ex-Amish and returning to her childhood home of Painters Mill, Ohio is not the life that most would pick, but she felt that it was the best choice. A choice where she could use her understanding of both the Amish and English worlds and act as a go between when sticky situations arise. On a dark winter evening, one of Kate's young officers is sent out on a routine call; unfortunately, it wasn't just wandering cows that he found along the road, there was a brutalized body, a body that bore striking similarities to a serial killer that had struck 16 years before. A killer that Kate knew couldn't be back, but yet the proof was written all over his victim's body. Kate isn't the only one with secrets; John Tomasetti is just one bar stool away from permanently being removed from his official position. His past is just as grueling as Kate's is, but between the two of them, they either solve this case or there is nothing left of their lives for them to live. With their combined expertise and the help of the Painers Mill Police Department, a killer must be brought to justice before they have to tell another family of a tragic loss. I can usually pick out the killer early on in a book, the author usually leaves enough clues that the climatic moment just usually leaves a lot to be desired, but I can honestly tell you that I didn't pick this one. The storyline flowed, the characters were given their own voices and their own directions, and when a final clue was given, I literally said, "really?". Very good book, very good conclusion and I look forward to the next book by Linda Castillo.

A Heck of a Good Thriller

Published by Thriftbooks.com User , 12 years ago
Kate Burkholder grew up Amish in small town Painter's Mill, Ohio. She was banned by her community when she refused to join the church, so she moved to Columbus to live like "the English" and she eventually became a police officer. Because of her past with the Amish community Kate was asked to become police chief of her hometown, a job she holds when the story opens. In a short space of time three women are killed by a serial killer who seems to be the same man who'd stalked the town, murdering young women sixteen years ago. Kate knows it can't be the same man, but she can't tell anyone and this puts her in danger, because the killer has her in his sights. This is a very good read, however I was just a little put off with the ending. I thought Kate should have played a bigger role in getting herself out of trouble, but other than the fact that the author relied a bit to heavily on the hunky, moody state cop to help out our local sheriff, I really liked this book.

Be ready to stay up all night...

Published by Thriftbooks.com User , 12 years ago
Linda Castillo is in top form with Sworn to Silence, about a small town police chief with a hidden past, now investigating a string of truly grisly serial rapes and murders that may or may not be related to her own secret. Enter another wounded cop, a state officer Kate is desperate to keep from finding out the truth and who is on the brink of total burnout himself. Will these wounded souls solve this crime spree or become victims themselves? This and other books are reviewed on my website, some in greater length. The secrets the Amish police chief are hiding, the burnt-out state cop -- all could be cliches if handled by a lesser writer. But as I stated, Castillo is in top form and you won't regret this page turner. I highly recommend this book for suspense, crime drama, and just enough romance to keep it interesting but not distract from the mystery. Great characters and will certainly keep you guessing.

Published by Thriftbooks.com User , 12 years ago
Told both in the first person narrative of Kate, the chief of police of a small town in Ohio and the third person when she's not in-scene, this is a really excellent new crime drama/thriller featuring a new female cop. I hate to compare authors and characters (really, I'm sure the authors hate it too), but I couldn't help but think of the very first couple of Cornwell's Scarpetta books when reading this. Kate is somewhat similar - strong but flawed in her personal life, professionally competent but struggling to keep her bosses and higher ups from sticking their noses into her work, ending up unfortunately personally involved with a coworker (sort of an oddball way of it in this one).. there are other similarities and a lot of differences, but I liked Kate a lot, as much as I liked the beginning of Scarpetta. The cast of secondary characters was excellent - I loved Mona and the ever-competent and never-complaining Glock and TJ. The complemented Kate nicely without taking over the storyline the way some do in other books (cough, cough, Lucy anyone?). The pace of this book is amazing. The author sets off immediately with a grisly homicide and never slows down from there. Usually there are places in books where you think, "oh, I can skip a few pages where it's getting dull and it won't matter," - don't think that here. First, there aren't any boring pages, and second, they all matter to the storyline. The Amish angle is interesting and well-told. I'm not Amish and know nothing about them, but it rings true and isn't patronizing. The ending and reveal of the killer shocked me. I had an idea of who it might be (I was in the ballpark), but Castillo pulled all the threads together and made it plausible. I had thoughts that this would make an great series, but I don't know how you'd squeeze that much crime into such a small town. Either way, I'll be looking out for her next book. I'm a huge fan of women crime writers and she's getting added to my list of authors to read.

Published by Thriftbooks.com User , 12 years ago
The town of Painters Mill, Ohio is a small town in Amish Country. Most of the people are known to one another, or else, have at the very least, a nodding acquaintance. The town is comprised of English as well as the Amish community. The two groups do not mix socially and live very different life styles. The new Police Chief of Painters Mill is Kate Burkholder. Kate has an interesting history because she grew up Amish in the town that she now serves. She left the community many years ago when she was a teenager and now in her thirties, she's an outsider to her Amish family and former friends. Chief Burkholder is competent, smart and tough when she needs to be. Her officers and staff all have her respect. When the shocking and horrible murder of a young woman takes place, Kate's reminded of some brutal killings that took place when she was young. The Chief has kept a secret from her past, a horrible secret that has always been in the back of her mind, and she's more than determined to stop and identify the killer. Could this be the same killer from years ago! When outside investigator are called in, Chief Burkholder tries to maintain her control over the situation, but the town council feels that because of her lack of inexperience, she needs assistance. There's really a lot going on in this story with the many varied characters who each have their own agendas. There's even a little romance, which gives a lift to the darker side of Sworn To Silence. I think, Linda Castillo, wrote an exceptional story, but at times, the graphic details were difficult to read! This is a real page turner and I stayed up late at night to finish this book. Can't wait to see what she writes next!
Copyright © 2020 Thriftbooks.com Terms of Use | Privacy Policy | Do Not Sell My Personal Information | Accessibility Statement
ThriftBooks® and the ThriftBooks® logo are registered trademarks of Thrift Books Global, LLC