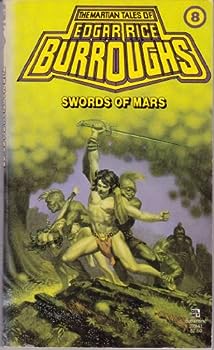 (Book #8 in the Barsoom Series)

"Swords of Mars" is the eighth book in the Edgar Rice Burroughs' Martian series. It was featured in six issues of the "Blue Book" magazine in 1934-1935. John Carter reprises his role of hero as he vows to bring an end to the Assassins Guild. He must travel to one of the moons of Barsoom, Carter then creates a race of secret super assassins to destroy this powerful Guild of Assassins. He ventures to the city of Zedong in a fierce attempt to overthrow...

A great example of the series.

Published by Thriftbooks.com User , 16 years ago
Swords of Mars is one of my favorites of the Martian Tales. Although late in the series, it has all the elements that made Burroughs a classic in the field: 1. It is a John Carter novel. He is still the best character in the series. 2. It does not suffer from the same artifacts of serialization that you see in some of the other Mars books. The chapters flow together very nicely without too many inconsistencies or abrupt breaks. 3. It manages to deal with the political aspect of life on Barsoom while staying smaller. I enjoy the more intimate focus on John Carter more than I do the more epic sweeps of some of the other books. Recommended for fans of the series. People new to the series should really at least read A Princess of Mars series. However, if you have read that one and are skipping around, this would be a good one to skip around to.

READ IT AND HAVE FUN!

Published by Thriftbooks.com User , 16 years ago
This was about number eight in the Martian Series and the story continues. With this book, Burroughs has John Carter fighting and trying to put an end to the practice of assissination on Mars. Like the rest of the Mars Series, the action is non stop. While I will grant you that ERB has certainly used a formula (Dejah Thoris is captured again and John Carter must rescue), it is never-the-less an effective formula. These books of course are sort of the grand-daddy of much of the Fantasy Fiction of today. Please keep in mind when they were written and do enjoy the style and syntax. This was some of the best pulp fiction coming out in the early part of the last century. Read and enjoy. Recommend highly.

John Carter decides to take down the Assassins Guild

Published by Thriftbooks.com User , 18 years ago
After being relegated to the background for the previous four Martian novels, "Swords of Mars" brings John Carter back to the forefront as he vows to bring an end to the Assassins Guild and travels to one of Barsoom's moons. Carter shows up at Edgar Rice Burroughs' cabin in the mountains of Arizona and relates this tale, which ERB then serializes as the eighth Martian story in six issues of "The Blue-Book Magazine" in 1934-35. Carter has created a secret organization of super assassins to strike back against the powerful guild of assassins, which is headquartered in the city of Zodanga, and goes to the city undercover to infiltrate their ranks. As the first step in an attempt to overthrow Ur Jan, the head of the assassins, Carter pretends to be a panthan and becomes the body guard of Fal Sivas, an inventor. Eventually, as he gets closer to his goal, Carter has to go to Thuria, one of the moons of Mars. For the most part "Swords of Mars" is one of the most intimate novels in the series, by which I simply mean that it does not have the gigantic armies of variously colored Barsoomians and thousands of air ships arrayed in battle. The first half of the novel is basically a spy story, while the second half find Burroughs indulging in one of his imaginative flights of fancy. Of course, it is not an ERB Martian novel if Carter's beloved Dejah Thoris, princess of Helium, does not need to be rescued. Just because ERB sticks to his pulp fiction formula does not distract from the fact he was a master of the form. This is an above average Burroughs yarn and while it is a step below his best Martian tales, such as "The Chessmen of Mars," it is still a compelling tale. Best of all, John Carter is back front and center. I wound rate this novel as a 4.5, but I will round up for Carter's return. Besides "A Princess of Mars," I think it is clear that "Swrods of Mars" is one of the primary inspirations for John Norman's Gor series, which was one of the best series that followed in the footsteps of ERB's Martian seres. Note: The first letters of the first words in the preface and twenty-four chapters from an acrostic message: "TO FLORENCE WITH ALL MY LOVE ED." The reference is to Florence Gilbert, ERB's second wife, whom he married in 1935.

AS FUN AS THEY GET

Published by Thriftbooks.com User , 18 years ago
"Swords of Mars" is the 8th of 11 John Carter of Mars books that Edgar Rice Burroughs gave to the world. It first appeared serially in the "Blue Book Magazine" in six parts, from November 1934 to April 1935, and is one of the best in the Carter series. For the first time since book 3, "The Warlord of Mars," Carter himself takes center stage, rather than making a brief cameo appearance, and his return as the lead character is perhaps the best single element of this book. This time around, Carter goes to the Barsoomian city of Zodanga to put an end to the assassins guild that is thriving there. In the first half of the novel, Carter goes undercover to infiltrate this Murder Inc.-type of organization, and this segment is extremely tense and exciting. In the second half, Carter's wife, Dejah Thoris, in what to any reader of this series must come as an instance of Dejah vu (sorry...couldn't resist!), is abducted again, and Carter follows her kidnappers to one of the Martian moons, using one of that planet's first spaceships. His subsequent adventures on the moon propel the reader into the realm of pure fantasy. Both parts of the novel are as fun as can be, although very much different in tone. This novel features very few of the inconsistencies--both internal and with other books in the series--that mar every previous Carter novel. There are some, however. For example, the great Scarlet Tower of Greater Helium is referred to in this book, whereas in previous novels, this tower was referred to as being in Lesser Helium, and besides which, was destroyed in book 5, "The Chessmen of Mars." More of a problem in the current volume are the book's implausibilities. For example, Carter & company jump out of their spaceship on that Martian moon, without bothering to check on the moon's breathable air. Fortunately, the air is just fine, thank you, although Burroughs makes nothing of this...surprising, given the pains he had taken in previous books to explain the breathable air on Mars itself. The invisibility-inducing hypnosis that the moon people use against Carter is a bit much to buy, but that's alright; it's all in good fun. But Burroughs' theory that a person who lands on this 7-mile-wide moon would be the same relative size that he would be on Mars--in other words, that he would shrink in proportion to the planetoid's mass; his so-called "compensatory adjustment of masses"--is, as Carter puts it, "preposterous," though, as it turns out, such is the case in the book. Like I said, it's all in good fun. And this book IS as fun as they get. Oh...one other nice touch. As pointed out in the ERB List, a fine Burroughs Website, if you take the first letter of each first word of each chapter in this book, you will find a secret message that Burroughs incorporated for his new bride. A nice touch.

Published by Thriftbooks.com User , 22 years ago
It's a great book like the rest of the series! Buy it
Copyright © 2020 Thriftbooks.com Terms of Use | Privacy Policy | Do Not Sell My Personal Information | Accessibility Statement
ThriftBooks® and the ThriftBooks® logo are registered trademarks of Thrift Books Global, LLC