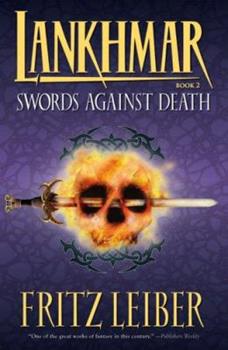 Lankhmar Volume 2: Swords Against Death (The Adventures of Fafhrd and the Grey Mouser) (Bk. 2)

In the second installment of this rousing series, Fafhrd and the Gray Mouser journey from the ancient city of Lankhmar, searching for a little adventure and debauchery to ease their broken hearts. When a stranger challenges them to find and fight Death on the Bleak Shore, they battle demonic birds, living mountains, and evil monks on the way to their heroic fate. Fritz Leiber's witty prose, lively plots and superb characterizations stand the test...

Published by Thriftbooks.com User , 14 years ago
It's a shame that in order to find non-formulaic fantasy, you mostly have to do your searching at the very beginnings of the genre. Fritz Leiber doesn't need a three book deal to tell a great story, and in fact being a master storyteller seems to have been nothing more than a trivial feat to his ever pranking genius. Disguised as pulp fiction, here is an intricately simple Sistine Chapel of fantasy fiction, each chapter an enjoyable stand-alone tale and yet a statement of literary symbolistic skill and an intrinsic part of the larger book and plot as a whole, all at the same time! What's more, you'll see the two reoccuring heroes Fafhrd and/or the Grey Mouser undergo character change and development in every single tale; no matter how he uses them, Leiber never fails at making these two personalities grow and flourish. The authors characterization is more amusing and perhaps even keener than that of the others in the triumvorate of fantasy of which he is a part (Tolkien, Howard, and Leiber), and is even reminescent of Brian Jaques and perhaps even Charles Dickens. Token run-on sentences are an aquired taste, but much appreciated when you get to know them, and Leiber famously switches styles like a mad maniac; the result is a rolicking journey describing its moods and settings with grammatical choices as well as poetic and sleezy descriptions. Here you will find the influence of modernism on fantasy, while finding the source of inspiration for what we have come to know as sword and sorcery. Imagine a young and reckless Conan as a sort of medieval rock star who's hanging out with a sorceror thief played by Johnny Depp in an episode of the Twilight Zone that's set in Tomothy Leary's 1960s Dungeons and Dragons campaign, and you'll be getting a glimpse as to what awaits you in the world of Nehwon.

A superb collection of S & S

Published by Thriftbooks.com User , 16 years ago
This is, in my opinion, the best of Leiber's tales of Fafhrd and the Gray Mouser, and by that rationale, some of the finest swords and sorcery around. This particular collection contains several of Leiber's earliest and most vibrant tales, including 'Jewels in the Forest', 'The Bleak Shore', 'The Howling Tower', 'The Sunken Land' and 'Thieves' House' as well as excellent later works such as 'Claws from the Night' and 'Bazaar of the Bizarre'. Unlike some of the other books in the Swords series, there's really not a weak tale here; 'The Circle Curse' and 'The Price of Pain Ease' are probably the weakest in the collection, being somewhat sketchy, but even those don't fall too far off the mark and are naturally written in Leiber's consummately beautiful prose. In addition, the sheer variety of tales here are sure to provide something to suit all tastes.

Published by Thriftbooks.com User , 17 years ago
Poor Fritz Leiber. He has never truly received the credit he deserves for fostering the fantasy genre. Along with the old Conan stories and Tolkien's Lord of the Rings, this is amongst the most influential works of fantasy fiction.Fascinating worldbuilding, intrigue and exciting characters abound in these tales, all told with Leiber's exceptional artistic skills. Not only are the plots and personalities compelling, but Leiber has a magical rhythm to his storytelling and descriptions. This is one of the few stories that is on my "reread" list.Pick this up and you'll love the stories--and when you look at the copyright date of these tales, you'll come to appreciate just how much Leiber has affected the fantasy authors that have come since.

Published by Thriftbooks.com User , 17 years ago
Fritz coined the term "Sword and Sorcery" He is one of the great grand masters of heroic fiction and his stories deliver with brass and style. He has creative genius combined with an appreciation fo pacing and the exotic. If onyl hollwood in 2004 could learn from him..... alas. This author is not a copycat like Terry Brooks, and comes as close as any to Robert E Howard, but tends to throw in a bit more social interaction. The series are gems, get them all today.Fafhrd is a northerner an ice barabrian while the grey mouser is a urban---fast as a cat and a bit or a magic user.They take on animated dungeons and sorcerers galore, find and lose love----and generally take you along for a grand old origional time.No rehashing of tolkien[in a crayy way ] like Terry GoodkindNo barfish unrealisticness like Thieves World were politics can trump bigtime magic users on a given day.Not goofy like MYTH series[although myth series can be entertaining]Just good appealing sword n sorcery adventure.GOOd Show Fritz-----The fact that he does not get more press is a crime-----I don't get it-----he needs to havce far more fan apprecaition sites.Azimov can't hold his jock.

Published by Thriftbooks.com User , 22 years ago
What is it about Leiber? Is it the fast paced action, the gripping sense of mystery, the well developed characters, the dank surroundings of Lankhmar which envelope both heroes and reader? Certainly the greatest feature of this book is its mooring in the world of Nehwon, a fantastic realm dominated by sword and spell, where law is only as strong as ones own ability to uphold it. It is this place that Leiber's rogues Fafhrd, a massive barbarian, and Gray Mouser, a lithe burglar, must negociate their way through the darkness and cruelty of their world. Nehwon seems to us a place of suffocating oppression where suffering and death rule the day, a place of misery that steals the joy of living. It is also home to Fahfrd and Mouser who have long ago survived their baptism by fire. Pain is a reality, but as both men show in Leiber's introductory book "Swords and Deviltry," they manage to overcome their suffering in the only way they can--through the brutal strength to persevere, take action, and stand fast in the face of danger. They don't become slaves to Nehwon, but seek to tame it and use it to their advantage. From here, the two swordsmen silently take on the world in a number of adventures which are modivated from lust of wealth to cheating death at his own game. Each short story carries with it a new adventure, fresh and original, which keeps the reader securely in place, and the mind in a whirl of activity. Not to mention, they also steal an entire house in one story, and you can't go wrong with that.
Copyright © 2022 Thriftbooks.com Terms of Use | Privacy Policy | Do Not Sell My Personal Information | Accessibility Statement
ThriftBooks® and the ThriftBooks® logo are registered trademarks of Thrift Books Global, LLC