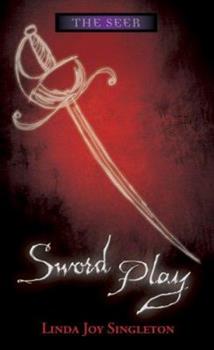 "Help her," insists the spirit of Kip, the jock from her old school who died in a car accident. But his cryptic message is the last thing on Sabine's mind as she packs up to move back home. She's not happy about leaving her friends, her boyfriend, and Nona who's gravely ill, but won't dare challenge her mother's orders. Besides, Sabine's also harboring hope that she can become close to her family again. Reuniting with her fencing club brings back...

Published by Thriftbooks.com User , 15 years ago
This book is a well-written, fast-moving mystery. The main character Sabine is well-defined and I like the fact that many facets of her personality, homelife and past are being revealed. The action in the story with the fencing scenes is very intense and believable. Author LJS really did her research and gives the reader a taste of what 'Sword Play' really stands for. I enjoyed meeting the new characters and liked the diversity of personalities. The romance was fun and light-hearted and I would like to see more books in The Seer series.

Published by Thriftbooks.com User , 15 years ago
The Seer series is a quick, exciting read. Sabine, a girl blessed (or not) with psychic abilities, tries to live a normal high school life, but it proves to be difficult, if not impossible. As I finished Book #3 in The Seer series, I was wary over Sabine's impending move back home. The move was not a disappointment, however, due to continued involvement from the series' other main characters. Additionally, the glimpses into Sabine's former life serve to develop her character even further, and getting to know her sisters has the same effect. As I tend to become emotionally attached to favorite book characters, I continue to be concerned about Nona's health and hope that Sabine finds the fourth charm in Book #5. I'm afraid we'll have to wait a while to find out, but it will be worth it.

Published by Thriftbooks.com User , 15 years ago
Protagonist Sabine Rose takes the reader on a circuitous journey as she attempts to unravel the mystery behind the death of a star football player, the sudden betrayal by her best friends, and being blacklisted at her high school. In addition to writing a compelling story, I'm impressed that for all her books that feature characters with specific skills, the author does her research up front and personal; for Sword Play, she took fencing lessons. Sabine's connection with the "other side" allows her to psychically eavesdrop into the minds of key characers, as she takes direction (not always willingly) from Opan, her spirit guide, whose acid comments provide some of the book's wry humor. Add to this mix some family dysfunction, an ailing grandmother, a lying boyfriend, and a fencing accident--and this fast-paced story with multiple subplots will keep you turning the pages.

Another excellent book in the Seer series!

Published by Thriftbooks.com User , 15 years ago
I'm amazed at how good these books are. I was a bit wary when I knew Sabine was moving back to her old home (who likes her mother, anyway?), but my worries were soon put to rest. I was definitely overjoyed to find that, along with the cover and title, the book involved a LOT of sword play. Linda Joy Singleton, the research payed off! And of course, there was Dominic, Thorn, Manny, and new additions to the unique crew in these books. There's a really weird and interesting twist... thing... at the end of the book. While reading this book, I had flashbacks from other books (Cate Tiernan's Sweep series, as well as her Baelfire series). I can't wait to hear the explanation for the last bit! It was interesting to see Singleton introduce this whole other world of Sabine's... at first, I wasn't sure how it'd all go down. I thought it might be awkward - the whole transition. But she handled it beautifully and I can't wait for more! I definitely recommend this book to anyone who is a fan of the paranormal. Also, as I said before, people who enjoy Cate Tiernan's books will most likely enjoy these as well.

You have GOT to read this one!

Published by Thriftbooks.com User , 15 years ago
Sabine Rose is upset that her mother is making her move away from Nona and all her friends in Sheridan Valley. Sabine does not want to return to San Jose. Yes, it will be nice to see her sisters, who are twins, and her father; however, she does not care to be near her mother or the gossiping people at Arcadia High that actually had a petition made up to have her forced out of the school. There were over one hundred names on the petition, including her best friend's, Brianne. So going bad is not a cheery thought. It is made worse when the spirit of Kip Hurst shows up in her bedroom the night before she is due to leave. Kip died six months ago in a car wreck on prom night, shortly after he dropped his girlfriend off at home. Sabine tried to save Kip by telling him of her vision. When he died, everyone began whispering and blaming her! Now Kip is asking Sabine to "help her". Problem with that is that Kip did not say WHO she was to help. Sabine is giving out candy on Halloween when Mr. Landreth, her fencing instructor, shows up at her door. He wants Sabine to get back into fencing, even though Sabine clearly states that she does not want to. Sly and persistent Mr. Landreth soon has her agreeing to help him teach beginners. The famous fencing club, known as the Foils, comes back into her life. Sabine used to be in the club, before she left for Nona's home. The only really tough one to see again is Brianne. Ashley and Amy, her twin sisters, believe Kip wants Sabine to help his younger sister, Lucretia, out. Sabine believes that Kip wants her to help his ex-girlfriend, Aileen, out. At the same time, Dominic drives up from Sheridan Valley with a lead to locating the fourth and final charm that could help save Nona. Looks like time is the one thing Sabine does not have any more. The part that hurts Sabine the most though is that her boyfriend, Josh, had promised to drive up every weekend to spend time with her; however, he has not. ***** An excellent addition to the "Seer" series. Looks like things are beginning to wrap up for Sabine and those around her, in Sheridan Valley AND in San Jose. The next book may the final one. So keep an eye on the author's web site for any new updates. As for me, I could not put the book down. I began reading it in the morning and did not stop until the last page had been read. The author added in some startling twists too! My jaw almost hit the floor at one point. This is a MUST READ during your Summer Vacation! ***** Reviewed by Detra Fitch of Huntress Reviews.
Copyright © 2020 Thriftbooks.com Terms of Use | Privacy Policy | Do Not Sell My Personal Information | Accessibility Statement
ThriftBooks® and the ThriftBooks® logo are registered trademarks of Thrift Books Global, LLC