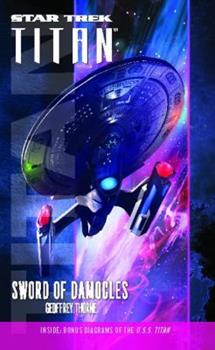 The fourth novel in the bestselling Star Trek Titan series Fate: It is an idea as old as life itself. Do our choices shape the future, or is it the other way around? And if the path we walk is predestined--if the way we are to meet our end is knowable--what might that knowledge compel us to do? Titan's travels take it to a world at the edge of reason. Orisha is a planet whose people have lived for centuries beneath an unfathomable celestial body in...

Published by Thriftbooks.com User , 12 years ago
I wrote this book. It was my first published novel and I had a ball doing it. I love Star Trek. Pure and simple. It was and remains one of the great honors of my life to have been allowed to play in this sandbox. It's not for everybody but I hope most people who read it get something out of it. For those who don't, no hard feelings. You can't please everybody every time. For you guys all I can say is, "Check out the next one." Cheers, everybody and thanks for the support and the criticism.

Published by Thriftbooks.com User , 13 years ago
Geoffrey Thorne succeeds where most pop science fiction authors fail. He both presents a new idea (planet literally facing a twisted reflection of itself) and tells a compelling story. The interactions between Jaza Najem & Y'lira Modan, specifically Jaza's dual attraction/repulsion from Modans disparate physical forms, and the workplace friction between Christine Vale and Xin Ra-Havreii actually got me interested in the motivations and flaws of these characters, something hard to do in the character-saturated Trek universe. The imagery throughout the book is equally impressive (the 'becalmed' ship, the 'eye' in the sky). The ending to this book makes the book. No names are given, but the quality storytelling leaves no doubt as to who we are reading about from page to page. This technique is one more instance of the author making this more than just another Trek pulp. The Riker/Troi angst ends predictably, which is really my only problem with the book, but fortunately both characters are kept on the sidelines, where they belong. When I put this book down I was amazed that a Titan installment (or even a Trek book) could be this good. Its predecessors by other authors have been above average, reaching sometimes desperately for a plot. Sword of Damocles was above and beyond the best of the series, presenting problems not easily solved with tired reset button or disposable red-shirt tactics. So, who is Geoffrey Thorne? I had no idea. After reading this, I did some digging and found little in the way of novels. If you're reading this, Geoffrey, we want more!

They should make a movie...

Published by Thriftbooks.com User , 14 years ago
I really enjoyed this whole series. I can't wait for the new one this fall.

Published by Thriftbooks.com User , 14 years ago
Geoffrey Thorne is a relative newcomer to the published Star Trek mythos, with just a few short stories to his name. Sword of Damocles, the latest "Titan" novel, is Thorne's first full-length novel, and he's written an exquisite one. The Titan writers seem to be excelling at not having "villains" in their novels, instead having antagonists that have conflicting points of view with our heroes, and Thorne provides us with a perfect example of that here. All of that, and Pocket Books has given us technical diagrams of the new ship too! While the technobabble can get a little thick in Sword of Damocles, Thorne never lets it get out of control, and it helps that he has some non-technological characters for others to explain things to. Thorne has created an extremely intricate plot, dealing with some time travel, cultural contamination (and its avoidance), and how things that are not understood can assume heightened significance in those who don't know any better. Thorne puts all of his characters through the wringer, as all of them must make choices based on both the Prime Directive (the non-interference policy Starfleet has) and what's best for their ship. What I especially liked about Sword of Damocles, though, is that the fact that the crew is extremely diversified was not used as a cudgel over the reader's head. We saw the integration of the crew, but nobody actually *mentioned* it. It was a breath of fresh air given the past three books. Thorne doesn't avoid this by not using any of the alien crew members, but by showing us how they're interacting with the crew without actually announcing it. I hope future Titan books do the same thing. I realize that this diversity is sort of a novelty, but we're four books in now, so it really should be stopped. Thorne's characterization is almost perfect, from Vale, Troi and Riker to the other Titan crew members and even the Orishans themselves. Commander Ra-Havreii, the rather arrogant chief engineer, is annoying to everybody, but somehow he walks that thin line of not turning off the reader as well. The reason for the rift between Riker and Troi seems a little basic for how much anguish it causes, but it is understandable, especially in their situation. Still, the writing is powerful and the characterization is right on the nose. The climax to the story veers a little bit into the heavy technobabble mode, but it's exciting nonetheless. Thorne's prose is quite good for a first novel, and the book reads very smoothly, with very few clunky phrases throwing you out of the book. He describes both the character scenes and the action scenes quite well, never making it boring but also not overdoing the action too much. There were a couple of coincidences that I shook my head at, but for the most part they have a plausible explanation that makes it so they're not too annoying. Sword of Damocles is the best Titan book since Taking Wing, and here's to many more adventures in the future. Of course, we'll have

An excellent entry in the series for all fans

Published by Thriftbooks.com User , 15 years ago
"Sword of Damocles' is the first STAR TREK: TITAN novel in almost 2 years, and proves to be worth the wait. A wonderful aspect of this series (chronicling the adventures of Captain Riker and his crew) is the core concept of the series as given by editor Marco Palmieri, essentially that TITAN is "the Original series for the Next Generation era." In other words, TITAN is all about outward exploration, with the Federation getting back to the core ideals of exploring strange new worlds and seeking out new life and knowledge after years of war and strife. The crew of TITAN are leading this endeavor as they explore a region of the Beta Quadrant called Gum Nebula. And there are some great moments in this novel- high concepts mixed with wonderful character development. There's a central mystery, the delving into a character's past, the proverbial clock counting down- it all makes for a thrilling adventure. If you're a fan of Star Trek *period* then you should like this novel. Highly recommended.
Trustpilot
Copyright © 2022 Thriftbooks.com Terms of Use | Privacy Policy | Do Not Sell or Share My Personal Information | Accessibility Statement
ThriftBooks® and the ThriftBooks® logo are registered trademarks of Thrift Books Global, LLC