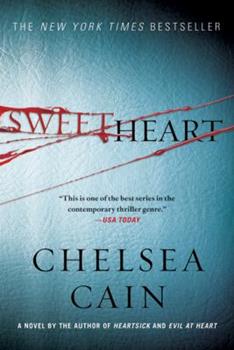 Portland detective Archie Sheridan, the former head of the Beauty Killer Task Force, hunted Gretchen Lowell for years before she kidnapped him, tortured him, and then let him go. Now that she is behind bars, Archie is finally piecing his life back together. He has returned home to his ex-wife and their two children and sworn off visiting Gretchen. Though it should feel like progress, being away from Gretchen makes him feel worse. When the body of...

Even Better Than HeartSick!

Published by Thriftbooks.com User , 13 years ago
"He was going to make love to his wife. He was going to do this one last time. Even if it meant cheating just a little. So he decided to let Gretchen into his mind just for a moment. He closed his eyes. And there she was. God, she was so beautiful, her blond hair and milky white skin, her mouth open, wanting him. He tasted Debbie's earlobe, and it was Gretchen's earlobe..." - From Sweetheart In the follow up to her bestselling debut, Author Chelsea Cain assembles the familiar cast of characters from her first book, Heartsick--but this time, the suspense, chills and surprises have ratcheted up in her newest offering, Sweetheart. Sweetheart follows the continuing sick relationship between a beautiful female serial killer and the cop she once seduced, imprisoned and tortured. Raped and battered while in maximum-security prison, Gretchen Lowell--the Beauty Killer psychopath--refuses to tell who assaulted her. That is, to anyone but her former lover and victim, Detective Archie Sheridan. Fed up with the bizarre tenderness Gretchen and Archie display during the infirmary visit, Archie's fellow cop and best friend Henry Sobol orders Gretchen transferred to another prison over an hour away. But something goes horribly awry during the transport, and Archie, his family, friends and colleagues are plunged into a harrowing, deadly game of pursuit along with Archie's escalating drug addiction and obsession. Parallel to this plot line, reporter Susan Ward continues to investigate Senator Castle, attempting to get Molly Palmer to go on record about her molestation at Castle's hands when she was his 14-year old babysitter. Unfortunately, Susan's line of questioning about Castle's misconduct and cover-up results in the murder of someone close to her, as well as another face-to-face meeting with Gretchen Lowell... All plot lines eventually thread together in a rather neatly tied, yet shocking, denouement. Whereas HeartSick took me about a week to read, I greedily devoured Sweetheart in a day. Utterly absorbing and entertaining, this is one of those books that are twisted yet fascinating, morbid yet oh-so-delicious--a teaser that somehow convinces the reader to root for Archie and Gretchen's relationship, while at the same time, appalled for doing so. Even better than HeartSick, the well-written and fast-paced Sweetheart will keep you up all night--and wondering who ends up dead...and who ends up barely alive. Janet Boyer, author of The Back in Time Tarot Book

Published by Thriftbooks.com User , 13 years ago
The second book of Detective Archie and the serial killer Gretchen picks up right where the first book, Sweetheart, left off. It's hard to say which book is better as they both were excellent and I couldn't put them down. I thought the characters were really well done and I enjoyed how they intertwined together -- Archie, Gretchen and Susan. The writing was colorful and detailed but not cliched and predictable. I especially enjoyed reading about the writer Susan and her aging hippie yoga mama with the peace sign shaved in her pubic hair!?! I just finished the book today and I'm ready to read more! It's rare to for me to feel sad that I'm at the end of the book but this is how I felt after reading Sweetheart.

Published by Thriftbooks.com User , 13 years ago
Once again we are plunged into the sick world of serial killer Gretchen Lowell and her former captive Detective Archie Sheridan. The gore and gruesomeness of the first book "Heartsick" is significantly missing in this one, but the psychological (and really perverse) relationship of the two characters is explored in more depth. This book answers some of the nagging questions left over from the first one, particularly why Archie is consistently drawn to a woman who tried to, and at one time actually killed him. We are also drawn into the subplot of the first book: the relationship between a sitting senator of 50 and his family's 14 year old babysitter. Everything is bound up in one roller coaster ride of a plot, and the reader just gets swept along with it. Judging by the ending, there could be another book in the works. If there is, I will be sure to read it avidly, as I did the first two!
Copyright © 2020 Thriftbooks.com Terms of Use | Privacy Policy | Do Not Sell My Personal Information | Accessibility Statement
ThriftBooks® and the ThriftBooks® logo are registered trademarks of Thrift Books Global, LLC