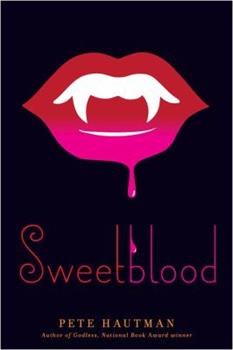 Lucy Szabo thinks she knows where the myth of vampires came from. She's sure that that the first vampires ever were dying diabetics. And she should know. She's diabetic herself. When she gets involved with Draco, a self-proclaimed "real" vampire she meets in a Transylvania chat room, her world starts to crash down around her. Soon, her whole life--grades, relationships and health--are spiralling dangerously out of control. Lucy needs to make some...

Published by Thriftbooks.com User , 16 years ago
Sweetblood is the story of 16 year old diabetic Lucy. She has a fascination with vampires and has her own theory that vampires are (or were) among us dealing with diabetic people not getting their insulin. She is always on a Transylvanian (vampire) web sight and is constantly looking for a so-called `vampire' by the name of Draco, and she believes (for good reasons) that he may be a vampire. One day she meets Draco face to face and... I wont tell you any more because it would ruin the story. Characters are well drawn and it has a great plot. Sweetblood also has some funny parts in it.

Published by Thriftbooks.com User , 16 years ago
One of my friends recomended this book to me. I was thrilled to hear of a vampire book about a girl with diabetes that was actually written by a guy who is diabetic. I figured he could do a pretty accurate job of showing what its like. Ive read a typical vampire books before and they all seem to use a similar plot and charecters. This book really stood out because of its originality and creative outlook on the history of vampires. "Sweet Blood" is centered around the cynical Lucy Szabo, who as you might have guessed, is diabetic. She has a theory that the first vampire legends were based on untreated diabetics, (untreated as in: when they dont get their dose of insulin when they eat.) She explains the disease and what happens when a diabetic is deprived of insulin. She describes these symptoms as being vampire-like. The story begins with Lucy talking about blood and how she can feel it in her body whooshing around. The imagery is amazing. Very poetic and descriptive. It goes on to explain her theory and the story unfolds as she meets new people who help bring her into the goth subculture. However, this book is not just about vampires, (although a lot of it is....thats hella cool!. It does talk a lot about her disease. It really gives an inside look on growing up diabetic. Im an insulin-dependant diabetic like Lucy and was happy to hear someone,(even if it was a charecter in a book)felt similar to the way I do about my disease. She talks about diabetes so much during the book because it really does take over your life! Just because you can live with it doesnt mean its easy. Like any disease, it takes effort. With the added vampire element, I think the author created a really well written and poetic book. This is one of my favorite books and will be for a long time.

One of the best books ever.

Published by Thriftbooks.com User , 16 years ago
"I am not cool. Dead people are cool. I am not dead. I am Undead." Lucy Szabo, a sixteen-year-old diabetic, believes she is a vampire. She believes that she is not among the Living. When she enters the Transylvania Internet chat room, she meets Draco, a supposedly real vampire. Lucy and he crush, Guy, or Dylan, go to a party where she encounters a strange man named Wayne. Although she believes they have never met, Wayne somehow knows all about Lucy and her vampire theories. But what she also doesn't know is that Wayne will be changing her life. She soon gets lost in her Goth world of vampires, and loses all stability of her life. Lucy knows she needs a change, but how? Sweetblood is an amazing story of teen angst and Goth culture. Hautman invites readers into a world they may never experience. He creates a universe you can enter, but never exit. As I read this book, I followed Lucy through her life as a young, diabetic Goth, and it opened my eyes to the different worlds and cultures around me. Pete Hautman does an excellent job using amazing dialogue to unlock a story that would have never been thought of. Sweetblood is a tantalizing, anticipating, and breathtaking read. It will blow you away. I recommend this exhilarating novel to anyone who is not quite aware that there are vampires among us, and all you have to do is believe. Erica Caruso Reed Business Information, Inc., 2003, 256 pp., $5.99 ISBN 0-689-87324-7

Published by Thriftbooks.com User , 16 years ago
this book is so good i cant put it down.if i did not find this book i would not be able to read any books at school.

excellent book about a girl in the goth/vampire subculture

Published by Thriftbooks.com User , 17 years ago
Goths. Vampires. Diabetics. You will find all of that and more in Pete Hautman's book Sweetblood. The book calls itself a "vampire novel," but really what it's about is a diabetic girl, Lucy, who's theory that slowly dying diabetics in the Middle Ages were the original vampires leads her to take an interest in people who call themselves vampires and the vampire/goth subculture. The book is well written, and although some teenagers may not be able to appreciate it, I certainly did. Lucy is sixteen, and has been diabetic since she was six years old. Her theory is that before the discovery of insulin, diabetics must have been seen as demons or as possessed in some way. She takes an interest in vampires and goes to vampire websites and the Transylvania chat under the alias Sweetblood, where she talks with others who share her interest and who consider themselves vampires. However, when the story begins, around the start of the school year, her grades have been deteriorating. When she writes a paper (that was supposed to be about what she wanted to do as an adult) on her theory of diabetics being vampires and goes into great detail comparing vampire legends and the symptoms of untreated diabetes, her concerned teacher calls a meeting with the school councilor (who she has already been to see multiple times) and Lucy's parents. The result: Lucy's computer is taken away from her. Apparently her parents think it dangerous for her to be on vampire websites all the time. Bored and angry, Lucy must find other things to do. The cute, goth new guy in school has taken an interest in Lucy. One night, when she is supposed to be grounded, Lucy meets him for coffee. While at the coffeehouse, Lucy is introduced to an older member of the goth scene who knows the guy she's with. As she hangs out at the coffeehouse more, she gains an invitation to the party of one Wayne, who she has never met before. When Wayne turns out to be Draco, a member of the Transylvania chat who has been tracking Lucy, things start to get strange. One of the best things about this book is that it gets the facts straight. A lot of times, people go on what they assume the goth subculture is. Pete Hautman has gotten his facts straight, making references to goth bands like The Sisters of Mercy and Concrete Blonde, as well as describing the various styles of goth found at Wayne's party. Sweetblood is well written and very hard to put down. The end of every chapter leaves you wanting more, and there is never a dull moment; even the moments dull for the main character are made up for with good descriptions. As one who was once very in to vampire chats and the goth subculture, I could fully appreciate Pete Hautman's Sweetblood.
Copyright © 2020 Thriftbooks.com Terms of Use | Privacy Policy | Do Not Sell My Personal Information | Accessibility Statement
ThriftBooks® and the ThriftBooks® logo are registered trademarks of Thrift Books Global, LLC