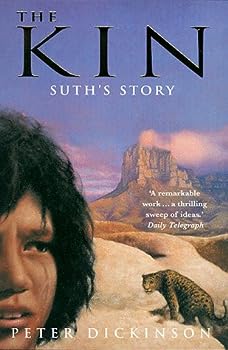 This description may be from another edition of this product. From the amazing Peter Dickinson (winner of 16 major young adult fiction awards) comes a compelling new series for older readers unlike any other--each story follows a band of children living in...

An Adventure Back in Time

Published by Thriftbooks.com User , 19 years ago
The book that I want to talk about is The Kin, Suth's Story. This book is about a boy named Suth and five other kids from the Kin tribe. Their names are Po, Otan, Noli, Tinu, and Mana. The terrible thing about this group is that they had gotten seperated from the elder Kins, so the six must survive on their own. They must travel into the desert and over many other arduous obstacles. Also in the story they get captured by a different tribe called the Monkey Kins. Their hideout is a small secret valley in the desert, however Suth tries to escape with the other five to freedom. But on the other hand at the end, Suth manages a way to escape with his fellow friends. The reason that I had chosen this book was because my cousin, Bernard had been reading this book while I was visiting him in San Diego. When I had seen him reading this book it seemed like he had been in another world or time dimension. So as it seemed this story takes place 200,000 years ago like cave people time. When I had taken a good look at the cover, I decided that I'll read it when I get home from Spring Break. Afterwards I took a brief visit to the library, I immediately searched for The Kin. When I found it I couldn't let it go. Particularly my favorite part in the book was actually when all the parts when Suth was brave. Especially when Suth fought off the overgrown bird trying to protect his friends. That's because the parts he were brave showed how much he had cared for his friends and what great of a friendship they all had posessed.

I was full of intrest! From the cover to the book itself!

Published by Thriftbooks.com User , 22 years ago
I have always wandered about the lives of people from long ago--those even as early as the Stone-Age time and how their lives were probably lived. This book gives me a slight idea--(since it is "mostly made-up") of one of the numerous ways that some of the first early humans did live out their lives. In the book's prologue, it mentions that there is not just one book, but a series of them. I have read the first and I am in the middle of the second. I hope that the future continuous books are as "good" . ;)

A real cliffhanger--it kept me on the edge of my seat!!!

Published by Thriftbooks.com User , 22 years ago
Suth's Story, by Peter Dickinson is a great book-- I couldn't put it down! On a scale from 1 to 10, I'd rate it a 10. Six kids of the Moonhawk Kin--Suth, Noli, Mana, Tinu, Otan, and Po--have been separated from the rest of their Kin. They survive only on the measly rations they find in the desert, not even getting food or water some days. One day when they are foraging, though, they come upon six people of the Monkey Kin. The Monkey Kin takes them in, feeds them, and gives them a place to sleep. The Monkey Kin is nice, helpful, and give them as much food as they want--but are intent on keeping them. The Moonhawks are thankful for that, but want to get back to their own kin...but they're not sure they can get away...This book is a real cliffhanger, in great detail. It kept me on the edge of my seat! This is one of my most favorite books!!!
Copyright © 2020 Thriftbooks.com Terms of Use | Privacy Policy | Do Not Sell My Personal Information | Accessibility Statement
ThriftBooks® and the ThriftBooks® logo are registered trademarks of Thrift Books Global, LLC