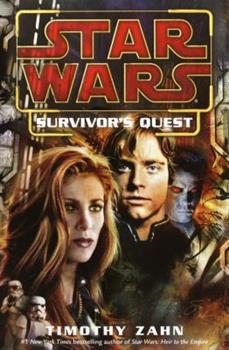 Sometimes it seems a Jedi?s work is never done and Luke and Mara Jade Skywalker know this only too well. Despite the bond they share in the Force, after three years of marriage the Jedi Master and his wife are still learning the ropes of being a couple?and struggling to find time together between the constant demands of duty. But all that will change when they?re united on an unexpected mission?and must pool their exceptional skills to combat an insidious...

Published by onemorechapter , 2 years ago
The great plot will make you want to never set this star wars story down. Dives greatly into Luke and Mara's character without overselling it. Incredible plot twist too.

Published by Thriftbooks.com User , 15 years ago
What can I say about Survivor's Quest? Well-contructed plot and well-planned storyline although there are some minor typo errors here and there. Mr. Zahn is undoubtly the best Star Wars novelist in the new millennium. His stories are extremely engaging and when it comes to suspense and conspiracy theories within the Star Wars universe, you can never go wrong with a Timothy Zahn Star Wars novel. Mara Jade is one of the most colourful characters ever created in the Star Wars universe, and I'm glad Mr. Zahn created her. Can't wait to get my hands on 'Outbound Flight', the prequel to Survivor's Quest. Mr. Zahn, please don't stop writing Star Wars, your fans can't get enough of your works. Hope to read more of your Star Wars novels in the near future.

Another success for Zahn

Published by Thriftbooks.com User , 16 years ago
I really enjoyed this book. I read the Hand of Thrawn duology right before this and with those events still fresh in mind it made this book that much better. It seems that when Zahn writes a Star Wars novel he is used to foreshadow coming novels. This one looks to be no different. I've yet to read The Joiner King, but it seems to be hinting toward it. The one thing is that I wish Zahn would not write a book that has to do with Thrawn however cool a character he is. Ofcourse his next book is Outbound Flight which deals with him also. Maybe someday. Any way this is a very good book that any fan should read.

Published by Thriftbooks.com User , 16 years ago
Fifty years have passed since 'Outbound Flight', dreadnoughts extraordinaire, were destroyed by warlord Thrawn. Luke and Mara are assigned to travel with the Chiss, Geroons, representative Dean Jinzler, and a cast of others, to the remains of the Outbound, which the Chiss have offered to return to the New Republic. There are hairy happenings on the arrival of the Skywalker duo at point destination one... a cable falls towards Luke... accident or not? There are suspicious explosions, disappearance of valuable documents, and the appearance of stormtroopers, believed to be extinct.... 'Outbound' findings on the planet Nirauan are not an empty vessel, there are survivors... some are Jedi Knights, who have been kept in seclusion. One alien group is in disguise... the ruthless Vagaari! In SURVIVORS QUEST, there are magnificent action sequences, including Mara and Luke battling a droideka, brought to you by Timothy Zahn, one of the best in STAR WARS' writings. Zahn expertly and seamlessly blends dialog, character representation, and definite action sequences. And Zahn is not short on humor --"How come it's so dark" asks Luke. "Probably because there aren't any lights," Mara replies! I highly recommend SURVIVORS QUEST as a not-to-be-missed read.

Published by Thriftbooks.com User , 17 years ago
Okay, so this is not exactly a masterpiece, but it is a great read. It's got an interesting mystery and awesome action. I understand that many reviewers have mentioned the fact that there are a lot of loose ends, and I agree. But, I know that Zahn is also coming out with a book that takes place during Outbound Flight next year, so that is probably why he didn't get all that detailed about the Outbound Flight Project. So, with that said I'd also like to thank Zahn for making this about Luke and Mara because their relationship was way too corny in the New Jedi Order series and Mara hardly even acted like Mara. Now Zahn, who already had to do this once, has corrected some errors in other SW books. Like making Luke and Mara an interesting couple that doesn't drip with cheesiness.

ANOTHER winner from the BEST Star Wars author working today

Published by Thriftbooks.com User , 17 years ago
For those of us who are either casual or even serious Star Wars readers, the name Timothy Zahn usually means one thing in particular: a REALLY GOOD BOOK. Zahn's original Trilogy still remains the absolute BEST Star Wars novels in print, and I am happy to say that for the die-hard Admiral Thrawn fans out there, we finally get to see a glimpse into where he came from. The Chiss, as they are called contact the New Republic -- specifically Luke Skywalker -- to offer a gesture of good will by informing them they have located the remains of the original Outbound Flight where the original Jedi Master C'Baoth disappeared some 50 years before on a quest to map out the Unknown Regions of Space. Thrawn intercepted this flight under orders from Emperor Palpatine and utterly decimated all within -- or so we were told. From the very beginning, this story absolutely ROCKS. I would describe it as a finely tuned mystery that, like an onion, is peeled away slowly but surely as the chapters fly by at Lightspeed. Someone has intercepted the message meant for Luke and as they travel deep into Chiss space, they discover abruptly who it is who made that interception, and along the way Luke & his wife, Mara find more than they bargain for. Mysterious problems happen on the Chiss spaceship, seemingly to be nothing more than choreographed diversions for other more interesting crimes to take place. Along the way we meet another race of aliens who wish to pay tribute to the Jedi who fought to save them from enslavement by a mysterious unknown race of ruthless conquerers and very nearly slaughtered them all. When Outbound Flight is finally reached, Luke, Mara & the Chiss are rather surprised to find out that not only are the 6-Dreadnaughts in remarkable shape considering their crash-landing, but they also find the last thing they ever expected: survivors -- survivors who apparently wish to have nothing to do with Jedi. A chance to discover what really happened to Outbound Flight and what role the Chiss really had in their destruction is quite a mystery indeed -- a journey that is very much worth taking.For those of you who ONLY enjoy Star Wars tales that include all of the major CORE characters (Luke, Leia, Han, Lando, R2D2 & C3PO etc) you just may be slightly let down. For the rest of us who read ANYTHING written by Timothy Zahn, you will NOT be disappointed in the slightest. As this story unfolded I found myself absolutely wrapped in the mystery and I had a very difficult time putting it down to do mundane things like eat and sleep. I was also VERY thrilled to hear that Zahn is also planning an additional novel based upon the actual mission OF Outbound Flight scheduled for release sometime next year. Fans of Timothy Zahn Rejoice! This is just an additional adventure in that Galaxy Far, Far Away that truly lives up to the Grand Adventure that began with Episode IV back in 1977. Great Stuff!
Copyright © 2020 Thriftbooks.com Terms of Use | Privacy Policy | Do Not Sell My Personal Information | Accessibility Statement
ThriftBooks® and the ThriftBooks® logo are registered trademarks of Thrift Books Global, LLC