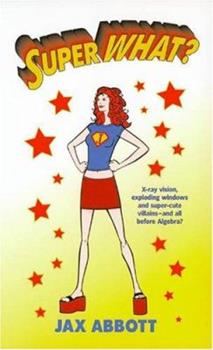 by Jax Abbott and Alexandra Karina

X-ray vision, exploding windows, cute guys, and the pain of her father?s death: When the fifteen-year-old daughter of superheroes finally gains her own powers, will she learn to control them enough to battle her way through sadness?and still get a date to the prom?

Published by Thriftbooks.com User , 16 years ago
I loved this book!! I laughed through the whole thing!! Jesse is soo funny!! It is also a good book for you if you LOVE Orlando Bloom!! I highly suggest this book!!!

A delightful book for all ages

Published by Thriftbooks.com User , 16 years ago
What a fun book! I finished this one in under twenty-four hours, because I was so interested in Jessie's plight. Abbott's voice makes the book fun and funny, and it was just what I was in the mood for. As soon as I finished, I ordered the second in the series. I can't wait until another comes out!

Don't pass this up!

Published by Thriftbooks.com User , 16 years ago
First of alll, I'd like to say that I enjoyed this book very much! If it wasn't for the fact that I decided not to judge a book by it's cover (because let's face it-the cover isn't exactly "super" cool in my opinion) I would of missed something really great. Because this book is just one of those things that definetly could of been bad like so many teen books but it suprised me! As you know Jesse is a super hero with problems to deal with like how to control her x-ray vision and super hearing but also has dilemmas (sp?) like how to deal with the "populars" like Kelli and problems with boys.Between dealing with her super hero powers and the hassles of every day teen life this book is enough to keep you reading from cover to cover.This book is hardly anything but corny from it's interesting plot to it's funny,sarcastic writing this is worth the money!

Published by Thriftbooks.com User , 17 years ago
OK, I left teenhood behind in late '87, but still . . . I think this book is SO excellent! A teen superhero! A sparkling mix of realism and fantasy that will appeal to both chronological teens and the inner teen in everyone. And yes, I pre-ordered the sequel!!!

Published by Thriftbooks.com User , 17 years ago
Fifteen-year-old high school sophomore, Jessie Drummond, is not your average teenager. Sure, she likes guys, dreams of being kissed by Orlando Bloom, and worries about her big, crazy hair, and how it just never seems to want to cooperate. But most teenagers aren't part of a family of superheros like Jessie is. And most teenagers don't have to worry about why they never came into their superhero powers, but their genius seven-year-old sister did, and most teenagers didn't have their superhero Father killed while he was fighting evil villains for the League of Liberty, causing Jessie, and the rest of her family to leave Seattle and head to a tiny town in Florida called, get this, Skyville. But now, things are changing. Jessie's powers are suddenly coming on, very strong, and if that weren't enough, she has two super-cute guys vying for her attention. Now Jessie has to worry about saving the world, on top of choosing which guy she likes more, and wants to go to Mini Prom with. Of course, this is all in a day's work for a superhero. Jax Abbott has proved that she has quite the imagination, as well as a way with words when writing for teenagers, and it shows in her effort with SUPER WHAT? Jessie is an exciting, wise-cracking character, filled with anger and anticipation when it comes to her superhero powers. Abbott proves that superheros, those with superstrength, who Normals depends on to save the world, go through the average emotions that any normal teenager would go through, only about 100 times worse, seeing as how so many people depend on them. Overall this is an amazing effort, that will be snatched up by fans of teen fiction, or those who enjoy a good, interesting story about a superhero, seeing as how it is done very originally here. Erika Sorocco Book Review Columnist for The Community Bugle Newspaper
Copyright © 2022 Thriftbooks.com Terms of Use | Privacy Policy | Do Not Sell My Personal Information | Accessibility Statement
ThriftBooks® and the ThriftBooks® logo are registered trademarks of Thrift Books Global, LLC