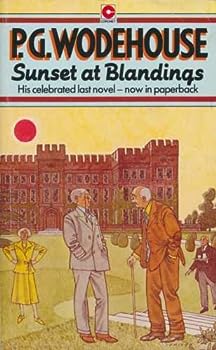 (Book #12 in the Blandings Castle Series)

Wodehouse died before finishing this novel, which uses the Blandings formula: a pretty niece brought to the castle to separate her from a suitor; suitor infiltrated under an assumed name by Gally;... This description may be from another edition of this product.

A Last Look at a Master's Inner Workings at Blandings Castle

Published by Thriftbooks.com User , 17 years ago
This book will only appeal to those who are hard-core P.G. Wodehouse fans, especially those who love the books about the inhabitants of Blandings Castle and the Empress of Blandings. For these fans, Sunset at Blandings will be a delightful revelation and a final memorial to the great comic master. For everyone else, this book will be a non-starter. P.G. Wodehouse died, unfortunately, while working on the manuscript for Sunset at Blandings (a title he would never have chosen himself, as the editor notes). The first draft of the manuscript was pretty far along with a story line written for the first sixteen chapters, along with many notes about how to revise those chapters and write the final six. The noted Wodehouse expert, Richard Usborne, has done a fine job of reviewing the notes and taking his best guess as to how the book probably would have been competed, and arranged to transcribe the remaining hand-written notes which are reproduced here. From those notes, you get a sense of how the marvelously intricate and fast-moving plots were developed and how each page ended up with so many original turns of phrase that bring a smile to the reader's delighted face. It was well worth the trip to understand how much rewriting, condensing and polishing P.G. Wodehouse did. He always makes it seem so effortless. I found it reassuring as a writer to discover that he struggled with his craft much as most writers do. To me, the book held two other delights that were unexpected. First, Mr. Usborne has considered all of the manuscripts about Blandings Castle and taken a crack at what the floor layout and surrounding grounds might have looked like. That's quite a challenge because P.G. Wodehouse didn't have an editor who cared about continuity to rein him in. The marvelously misshapen incongruities are brought together for a sense of what must usually have been the case in these novels. Second, Mr. Usborne used the railway schedules and descriptions of the surroundings to take a guess about where in Shropshire Blandings Castle was imagined to be. That discussion might seem senseless except when you read the notes about when the Library of Congress began its research to find out about the copy of the Gutenberg Bible that was deposited there in one of the early stories about the castle. The story is one that holds much promise. Galahad Threepwood is again trying to help young lovers by foiling one of his sisters. He helps his niece, Victoria (Vicky) Underwood, to smuggle in her artist fiancé, Jeff Bennison, under the guise of being a well-known painter of pigs to make an oil of the Empress for the family portrait gallery. As usually, the poor fellow's fault is that he has no money. Naturally, Vicky is rolling in the stuff so the challenge is to get her stepmother out of the way. Vicky wants to elope but Jeff demurs because he wants Clarence to get his pig portrait first. That puts a strain on the old relationship. As another plot line, Si

Published by Thriftbooks.com User , 17 years ago
Sunset at Blandings was Wodehouse's last and, sadly, unfinished book. What there is of the book is, as Wodehouse's writing invariably is, very funny. Accompanying the unfished novel are some wonderful extras including Wodehouse's plot outline, some of his other notes, the editor's analysis of the book, a short piece about the origins of Blandings Castle and another about the Empress of Blandings. If you're new to Wodehouse you should probably read something else of his first (Leave it to Psmith and Pigs Have Wings are both excellent for first-timers), but for those who like Wodehouse this offers an wonderful look at how he did his writing.

Published by Thriftbooks.com User , 20 years ago
This book is like all the other Wodehouse books, Galahad trying to bring a couple together. It is a wonderful satire on all the earls, lords, dukes etc. etc. This one is about a lover who is posing as a person who is going to paint a pig, the Empress. Wodehouse never finished the book (because he died while writing it), but that makes it even more interesting. But be careful, once you start reading his books, most likely you will not stop. Everybody will be able to enjoy it a little bit, for his books make you laugh until tears come rolling down your cheeks. Cheers! :)

The master at work--inside writing.

Published by Thriftbooks.com User , 23 years ago
It was a bitter-sweet experience to read this book years ago, knowing it was P.G.'s last, and unfinished to boot. However, the editor (a Wodehouse biographer) included manuscripts and early drafts, showing marginal notes and erasures, Wodehouse's outline of his plot, and false starts of plot lines, and the editor's own analysis. A fascinating look into the process of writing.
Copyright © 2022 Thriftbooks.com Terms of Use | Privacy Policy | Do Not Sell My Personal Information | Accessibility Statement
ThriftBooks® and the ThriftBooks® logo are registered trademarks of Thrift Books Global, LLC