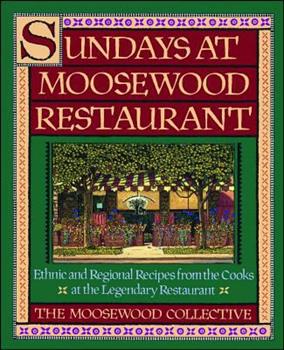 by The Moosewood Collective

Since its opening in 1973, Moosewood Restaurant in Ithaca, New York, has been synonymous with creative cuisine with a healthful, vegetarian emphasis. Each Sunday at Moosewood Restaurant, diners experience a new ethnic or regional cuisine, sometimes exotic, sometimes familiar. From the highlands and grasslands of Africa to the lush forests of Eastern Europe, from the sun-drenched hills of Provence to the mountains of South America, the inventive cooks...

I was skeptical, since I'm a meat & potatoes kind of guy...

Published by Thriftbooks.com User , 20 years ago
so what the heck am I doing with a vegetarian cookbook?!?? Well, I was given the book and some suggestions -- Sopa de Lima (from the Mexico section) and Saffron Butterflies. But it's a veggie cookbook, so it just sat on my shelf -- until I had dinner with the person who gave it to me. It wasn't until AFTER dinner, she told me it was recipes from this book -- the meal was so good, I didn't even notice it was meatless. So, I tried them, and now I'm HOOKED! Sopa de Lima is great food for during halftime of basketball and football games -- and I later found out I can make it fast and easy with some simple substitutions (hint: use a jar of salsa instead of a bunch of other ingredients). Saffron Butterflies is SMOOOOOOOTH and good -- with or without some meatballs thrown in. These two were so good I've had to try others and now "Rumpledethumps" (silly name, but GREAT DISH) is a personal favorite -- I just use it as a side dish along with a London Broil. Okay, so I'm a carnivore -- these recipes are great standing alone, and most of them work well with meat added or on the side.More than just the great recipes, this book is great for the stories, too. I never would have thought cookbooks make good reading, even when I'm not cooking, but this one is.

Even the picky children of the authors agree!

Published by Thriftbooks.com User , 21 years ago
My father was one of the lead contributors on this cookbook (he wrote the English food section). I grew up involved in Moosewood and was always a firm believer in McDonald's as a result. However, as I grew up I became a bit more adventuress in my eating habits. And as an adult I use this cookbook very often. It is my favorite of the Moosewood bunch - and about as close to eating at the world famous restaurant as being there. Don't be fooled - the "original" Moosewood cookbook isn't actually indicative of the restaurant itself. Sunday's at Moosewood, however, is the real deal! Come visit them in Ithaca some time! We're a beautiful town and we serve some good food!

Proving that tofu can taste good!

Published by Thriftbooks.com User , 22 years ago
I had reservations about this book since I usually only buy cookery books with photos, and this book has none. That said, I thought I'd give it a go, since the food at the Moosewood resaurant is so great. The focus is on cuisine from around the world, with each section including an interesting precursor to the region, detailing a little history of the area/writer/recipes.The recipes offer a really good variety of international cuisine (including numerous fish dishes for the "pesco-vegetarians" amongst us). I was thrilled to also find a British section included, since this is an area of the world that gets so often slammed for it's cuisine. (The Shepherd's Pie recipe is a must!)It's a rare cookery book indeed in which all the recipes you try turn out well - but this is certainly one of them. This has now become my staple recipe book, and comes thoroughly recommended.

This is my most-used cookbook.

Published by Thriftbooks.com User , 23 years ago
I've used Sundays at Moosewood so much that it has fallen apart into three pieces, and I need to buy a new one. The book is a good read--all of the authors introduce their regional sections with an essay about the culture and cuisine of, say, the North African highlands (my personal favorite). This is followed by a very satisfying variety of recipes from each area covered. The recipes are good! Dishes from Ethiopia, the Philipines, Japan, South Africa, and even England have become staples in my kitchen. I love this book.
Trustpilot
Copyright © 2022 Thriftbooks.com Terms of Use | Privacy Policy | Do Not Sell My Personal Information | Cookie Preferences | Accessibility Statement
ThriftBooks® and the ThriftBooks® logo are registered trademarks of Thrift Books Global, LLC