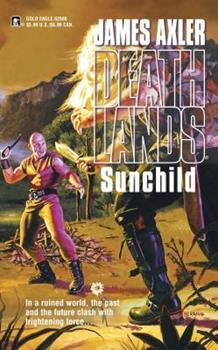 (Book #56 in the Deathlands Series)

This description may be from another edition of this product. Permanent Entropy After an atomic blast hurled the world into an uncertain future, the past still reaches out in hope . . . and damnation. In a kill-or-die world, one steadfast group of survivors...

Published by Thriftbooks.com User , 17 years ago
This series is one of those guilty pleasures kind of things. Like a Steven Segal movie, one shouldn't take this series too seriously and just go with the flow. You know the good guys will win out at the end or it would be the end of the series and that just isn't going to happen. They will face evil men and women, mutant creatures and plants, in a world gone berserk due to the cataclysmic nuclear war raged between the nations sometime during 2001. (Yes, we all know that it is now almost 2004 but please ignore the point.) They will journey from place to place via a teleportation type device popping up in a military installation known as a Redoubt before venturing outside to explore. No matter how bad it looks outside or the lurking danger, the band of explorers will venture out, leaving the relative safety of the Redoubt, face down the danger, and return back to travel to the next place. The good guys always win and live to face danger another day.As this novel opens, the group awakens to find themselves in yet another Redoubt in what was once the United States and is now known as the Death Lands thanks to the radiation effects. As they explore this Redoubt, which has major appearance differences from the normal Redoubts, they learn that the air system powered by the always present small nuclear generator is failing. This Redoubt also appears to be buried deeper underground than normal which makes their ascent to the surface more precarious, thanks to the diminishing air and land shifts due to earthquakes which have collapsed some of the emergency escape tunnels.Once at the surface, they step out into a lush world somewhere in a mountain setting. The plants have mutated tremendously surviving the frequent acid rains due to the chem. clouds that still circle the planet. The companions begin to wonder if this is a lead to the land that they have heard of somewhere far to the north where mankind is attempting to rebuild civilization. The place is said to be run by the Illuminated Ones who foretold of the planet wide destruction and of a sanctuary open to those could make it there.It soon appears that not only is this not a lead to the mythical place, but they have unwittingly walked into an escalating war between two rival villages in the outskirts of what once was Seattle. One group is led by the Sunchild and consists of a splinter group from the original Redoubt that has become horribly mutated due to inbreeding and their above ground exposure to the elements. Another group, living in underground tunnels of Seattle and calling their village Raw appear normal. They are also descendent survivors of the original Redoubt group. While they appear normal to the eye, they hide a deeper and more chilling sickness and evil.The group, led by the always unflappable Ryan Cawdor, find themselves in the center of the coming battle. Not only do they want to stay alive but they want to find out if anyone knows of the Promised Land that maybe nothing more than a fa
Copyright © 2020 Thriftbooks.com Terms of Use | Privacy Policy | Do Not Sell My Personal Information | Accessibility Statement
ThriftBooks® and the ThriftBooks® logo are registered trademarks of Thrift Books Global, LLC