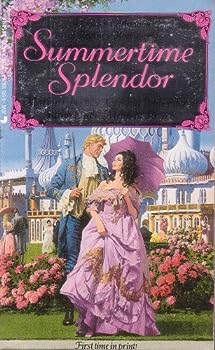 A collection of romance tales by today's romance masters features a tale of love at a royal birthday party, the story of a chaperone's unexpected chance at love, and a tale of love at Brighton. This description may be from another edition of this product.

Published by Thriftbooks.com User , 12 years ago
I'm going to review these one story at a time The Summer of Discontent--First Cassandra isn't the mistress of Bramfield Park, she's the youngest daughter. Now that that's out of the way, I mostly enjoyed this story. I had a little trouble coming to grips with the treatment of Cassie by her family, they genuinely had no remorse over their callous disregard for her. By the end of the story the only way Cassie managed to make them give her what she was due was by demanding it, emphatically. Miss Stevens, a spinster friend of Cassie's, was a wonderful secondary character. I'm glad in the end things worked out for those who deserved it. Lady Fair--I didn't like this one much at all. The two in love were so completely overrun by their well meaning relatives that I had trouble feeling bad for their inability to be together. Perhaps it was because the story was so fast paced I didn't believe the two fell in love. It felt more like they both saw in each other a way out, and yes attraction, and leapt at the chance. I will admit the ending, with the two overbearing relatives, was funny at least. A Summer's Folly--I enjoyed this story the most. I quite enjoyed Eliza and understood her predicament. I was not in the least sorry for her cousin. Thalia was a shrewish calculating fluffbrain who deserved what she got. Randall, her suitor, I liked the best of the four love interests in the book as well. I will mention that Thalia's problem is left hanging, which was unsatisfactory for me. Tides of Love--Another story with a callously mean relative mistreating the main character. This lady however bordered on hussy the way she was so forward! I don't think I've ever met anyone so wrongly certain about how she is perceived! I half-expected murder (especially after her mean tricks) by the end of the story. All in all it was a quick diverting regency read. The stories might have held up better with either more space to plot out and flesh out or with less happening and baggage (In Lady Fair there was at least one secondary plotline that could have been left out with little problems and given more space to development of the relationship).
Trustpilot
Copyright © 2022 Thriftbooks.com Terms of Use | Privacy Policy | Do Not Sell My Personal Information | Accessibility Statement
ThriftBooks® and the ThriftBooks® logo are registered trademarks of Thrift Books Global, LLC