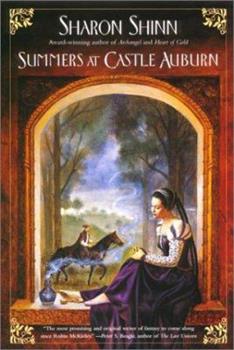 This description may be from another edition of this product. A woman blessed, or cursed, with a talent for witchcraft returns to Castle Auburn where she spent her childhood in joy-only to find an aura of dread awaiting her.

Published by Thriftbooks.com User , 15 years ago
Summers at Castle Auburn is a book that one can read over a number of times before catching all the hints in the story line. After reading many of her other books, I found this one refreshing and sly. I guarantee a good read and the inevitable second, or third read as well.

Published by Thriftbooks.com User , 15 years ago
I'm a glutton for a good romance, not the ones that are basically the pornographic literature that are in essence "smutty" books, but the ones that talk about the everlasting, non-lusty types that I've read from Carla Kelly, Elisabeth Fairchild, Nancy Butler and many others. These authors I've listed are not fantasy authors, but regency romance writers that I love. In my plight to find good romance mingled with great imagination in fantasy tales, I see that it must be a feat to accomplish. In Summers at Castle Auburn, I wanted there to be one of those fantastical love stories but I didn't quite get it. The story was written wonderfully and Coriel was a great person to hear from for all of the happenings of Castle Auburn. The intrigue and mystery that surrounded everyone involved in this story imposed on the love story that I couldn't see developing, which I think gave the story lesser demensions than it deserved. But in thinking over the book and all that was encompassed in making this tale, I decided that despite what I selfishly wanted from it, the author knew what she was doing and she did a great job of taking on the persona of a youthful young woman and made this story shine. Besides, even though I didn't think there was enough romance to make me convenced of who was happy with who, some other reader may think it perfect and jusifiable. In essence, I loved this story and it was great to read. And unlike some other reviewer who somehow thought this book smutty, they ought to go back to a dictionary because there wasn't a thing that was smutty in this story. True, there's references to sex and illigetimate babies but not in a coarse way. Anyone who reads Shinn will likely want this in their collection. As for me, it was my first, not my last. The next book of Shinn's that I hope to read is The Shape-Changer's Wife. I'll review that at a later date and see how it stands up to Summers at Castle Auburn. My other recommendations are - as always - Sherryl Jordan, Susan Carroll (who blends romance and fantasy effortlessly though I'll admit there's smutty moments...) and Peter S. Beagle's The Last Unicorn for any fanciful young reader who hasn't experienced his realm of imagery before.

Published by Thriftbooks.com User , 18 years ago
Shinn wonderfully combines an almost-romance with a number of complicated sub-plots in this book. It starts out with Corie, the illegitimate daughter of a noble, visitng Castle Auburn, home of her sister Elisandra. Corie, along with nearly all the girls in the kindgdom, is infatuated with her sister's betrothed, Prince Bryan...who is in reality an obnoxious, self-centered, spoiled teenager who cares little for others and for the world around him. It's frustrating, yet so realistic, how Corie can't seem to see the his bad qualities through the gleam of his splendour. As Corie grows, her eyes are "opened" to both Bryan's personality, as well as numerous plots being made within the castle walls. Corie finds herself struggling with her two identities - a noble lady of good lineage, despite her illegitimacy, and the apprentice to the wise woman of a small town. Corie's ways with herbs and medicines help her not only aid others, but also give her the opportunities make new friends, no matter how unlikely they seem. For the first time, Corie begins to doubt others and their actions. A constant argument she has within herself concerns the enslavement of the aliora; fey, man-like creatures who live in their own magical land but have been captured and sold for high prices. They are always wanted due to their magic and ability to send a feeling of calm to almost anyone. Corie, however, does not appear to be the usual female heroin...you know, the one who learns how to fight and stands up for herseslf and proves to the world that she is equal to any man. No, instead, Corie is the type of heroin who influences others, whether its through her friendship, advice, or actions. While she does do things her own way and cares little for what others, especially nobles, think, she does not go out of her way to prove herself equal, which is a reliefe from the normal fantasy books of this sort.This is an amazing fantasy book. The story is so enveloping, and the ending so satisfying, the second you finish reading it, you feel the urge to pick it up and start from the beginning again. The more times you read it, the more you begin to see all the different subtle hints that lead to the conclusion at the end. You will never get bored of it.

A dreamy fairy tale for all ages...

Published by Thriftbooks.com User , 20 years ago
A beautiful story with a fairy tale feel and a bit of romance, this has become one of my favorite books. This tale tells the story of a young woman, Coriel, the bastard child of a now dead nobleman, who is torn between the world of riches and power in the Regent's court and a simple life as the trainee of her grandmother, a small village healer. Every summer she lives as a noble at Castle Auburn with her beautiful and loving half sister, Elisandra, who is affianced to Prince Bryan, the most adored young men in the Kingdom. Bryan, the young orphan prince, is just getting his first tastes of power, and likes it very much.The story opens with most of the main characters embarking on a hunt for Aliora, a kind of very gentle and kind fairy folk who are used as slaves by the nobles. Coriel is a young 14-year old tomboy suffering from her first hopeless crush--on Bryan, the reckless and dashing young prince. The Prince's cousin, slim and serious Kent, keeps a watchful eye on Corie, and tries to curb his cousin's recklessness. Corie's Uncle Jaxon, the greatest Aliora hunter in the kingdom, herds the youngsters along, and Roderick, a young, handsome guardsman provides security. Only beautiful Elisandra is kept at home by her mother Greta, in order to avoid scandal.The story follows these innocent children as they change and grow into adults. Some learn wisdom, some fall in love, one learns evil, and one will die, before the tale is told. And we see all this through Corie's eyes, overshadowed by her innocence until the blinders are removed and she finally grows up and sees the reality of life in Castle Auburn.

Published by Thriftbooks.com User , 20 years ago
An adult fairy-tale is hard to come by, but Sharon Shinn manages a beautiful one in rare style. It's hard to find the collection of magic, castles, princes and princesses, alongside a hard-hitting plot and strong characters; however, this book fulfils them.Coriel is the ... daughter of a nobleman and a wise woman (who seduced him with magic) who spends nine months out of every year with her healer grandmother, learning how to be a wise woman as well. But every summer she travels to beautiful Castle Auburn, to be with her uncle Jaxom and lovely half-sister Elisandra. She rapidly falls in crush with the handsome Prince Bryan, unable to yet see what a self-absorbed bratling he is.A few years pass, and as Cory ages and matures, she sees that all is not sweet and peaceful at Castle Auburn. The elven aliora (who are sweet, gentle, kind, etc) are enslaved by the noblemen as servants, tied to the human world rather than their unspeakably beautiful otherworld. And Bryan is not the wonderful prince she was infatuated with — he is cruel, irresponsible, narcissistic, arrogant, and sires at least one illegitimate baby over the course of the book. Surrounding Bryan are more mature noblemen who don't want to be ruled by a brat prince, but are not ready to do anything. Jaxom takes sudden and unexpected actions. Elisandra must choose between happiness and duty, and Cory must consult her heart and morals after Bryan takes horrifying action against an aliora servant. Love, death, treachery and political intrigue lace the beautiful prose and entrancing background of "Castle Auburn."I liked Coriel. Rarely do books have genuinely human heroines, and her overwrought teen thoughts (such as her melodramatic statement when Bryan kisses her forehead) are in tune with infatuation. However, I felt her awakening to the aliora's plight was a bit too quick, and her siding with them a bit too complete (her willingness to see Jaxom as a monster, etc). I wish Jaxom had been a bit more explored, given the mysterious actions going on. Elisandra's rigid road of duty -- and the results -- were pretty emotionally jerky but made sense later on.Though billed as an adult fantasy, this is perfectly all right to let a teen read. There is some tasteful discussion of sex (in terms of illegitimate offspring and a wedding), not much violence, and no profanity worse than "damn." There is some talk of suicide/murder and moral debates on enslavement, however.Nevertheless, flaws or not, this book has a magical atmosphere that is worthy of an aliora.
Copyright © 2020 Thriftbooks.com Terms of Use | Privacy Policy | Do Not Sell My Personal Information | Accessibility Statement
ThriftBooks® and the ThriftBooks® logo are registered trademarks of Thrift Books Global, LLC