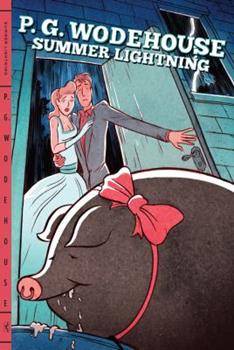 $13.95
On Backorder
If the item is not restocked at the end of 90 days, we will cancel your backorder and issue you a refund.
Usually restocks within 90 days
Add to Wish List

The Honourable Galahad Threepwood has decided to write his memoir--a tell-all that could destroy polite society. Everyone wants this manuscript gone, particularly Lord Emsworth's neighbor Sir Gregory Parsloe-Parsloe, who would do anything to keep the story of the prawns buried in the past. But the memoir isn't the only problem. A chorus girl disguised as an heiress, a double-dealing detective, a stolen prize-winning sow, and a crazy ex-secretary are...

A comedy of manners focused not on the drawing room but on the pig pen.

Published by Thriftbooks.com User , 13 years ago
The third in the eleven-book Blandings Castle series, Summer Lightning (1929) is a typical comedy of manners in its witty satire of upperclass life, with all its affectations, lack of perspective, and preoccupation with preserving the status quo. Like most of the Wodehouse novels, the main plot and subplots revolve around the subject of love as various characters face complications in their search for true happiness while dealing with class differences, false accusations, and even the impersonation of one character by another. Adding offbeat humor to this novel is the theft of the Empress of Blandings, the prize-winning pig (and all-consuming interest) of the dotty Lord Emsworth of Blandings Castle, just before the pig is due to defend its honor in an annual contest. As the story unfolds, Hugo Carmody, a failed nightclub owner, who has been hired as Lord Emsworth's secretary, is in love with Lord Emsworth's niece Millicent, who finds herself unexpectedly engaged to her cousin Ronnie Fish, who is really in love with Sue Brown, a local dancer, who "becomes" Myra Schoonmaker, a wealthy heiress, in order to be near Ronnie. If this were not complicated enough, Pilbeam, a local detective, and Baxter, the former secretary of Lord Emsworth, appear at Blandings Castle, adding more complications in this carefully choreographed and complex plot, which also features Lord Emsworth's brother Galahad, who is writing a family memoir, which the family wants to prevent from publication. The pig thief hopes to ingratiate himself with Lord Emsworth by secreting the pig (which is fed by Beach, the castle's Jeeves-like butler) and then "finding" it later. Like love, however, the course of pig theft, too, goes awry. The characters are stereotypical in their class and motivations, and the novel's complications follow the standard pattern of comedies of manners. Wodehouse enjoys shining the spotlight on his characters, however, and as they deal with their problems, for better or worse, some of them develop personalities beyond their stereotypes. The reader hopes for their success in love, despite their manipulations of the truth, and their sometimes foolish behavior adds an element of charm to the novel. Light in tone, despite the satire, Wodehouse novels show the absurdities of the aristocratic class, but they also show that aristocrats, too, are human, and in that respect they achieve an element of universality often missing from other satire. n Mary Whipple Something Fresh (The Collector's Wodehouse), 1915 Leave It to Psmith, 1923 Heavy Weather, 1933 Blandings Castle, 1935 Uncle Fred in the Springtime, 1939

Published by Thriftbooks.com User , 15 years ago
Although Wodehouse prided himself on his intricately-woven plots, his books succeed largely because of brilliant dialogue and humorous situations. Summer Lightning, written during Wodehouse's long creative peak, succeeds on all levels. A stolen pig, an embarrassing memoir, young love, and doddering old aristrocrats keep the action moving. Thoroughly-enjoyable escapist fare. In this Blandings Castle episode, Lord Emsworth is a relatively minor character and his son, Freddie Threepwood, is all but nonexistent, but Wodehouse's other characters are so amusing that this book succeeds nonetheless.

Published by Thriftbooks.com User , 18 years ago
Summer Lightning is one of the several delightful books in the Blandings Castle series by P.G. Wodehouse. Summer Lightning is better than many other P.G. Wodehouse books in that the plot and character development are more thorough than most which keeps the fun going longer. Clarence, the ninth Earl of Emsworth, is at home in his castle in Shropshire where he dotes on his famous prize-winning pig, the Empress of Blandings. Having dispatched his earlier secretary, Baxter, Clarence is at peace contemplating how his pig will win again when he learns from his brother Galahad (Gally) that the neighbor's pig man is offering 3:1 odds against the Empress. Clarence and Gally presume that their neighbor, Sir Gregory Parsloe is planning to knobble the Empress. Their worst fears are borne out when the Empress disappears! At the same time, Parsloe lives in fear that Gally will publish old stories about his wild younger days in Gally's new book. Clarence's and Gally's sister Connie wants to stop publication as well. Soon the castle is overrun with manuscript thieves! At the same time, love is in the air. Clarence's new secretary, Hugo Carmody, is secretly and unsuitably in love with Millicent Threepwood, niece to Clarence, Connie and Gally, and Millicent is in love with him. But they need to get some financial help to pull off the merger. Ronald Fish, a wealthy young man whose money is tied with Clarence, is also in love with an unsuitable person . . . one Sue Brown who is a chorus girl. Ronnie has proven himself to be a poor judge of investments in the past, and Clarence is skeptical of allowing any more money. It doesn't help when Clarence finds that Ronnie doesn't truly share his love of pigs! Will love win out? Of course! It's a P.G. Wodehouse book. But before love wins, humor will take the day in many silly scenes worthy of Shakespeare's best in the forest of Arden.

The best of Wodehouse

Published by Thriftbooks.com User , 23 years ago
Summer Lightening is the best Wodehouse novel, introducing many elements for the first time reader which reappear in many other Blandings Castle books. The major elements are: the prize pig called Empress of Blandings, a secretary named Baxter who is very intelligent but not liked by Lord Emsworth, who is the family head but detests everything except the pig, his younger brother Galahad, who is at peak of health by avoiding all healthy stuff, and their imperial sisters who control everyone around them. Read the book and savour.

Blandings at its best, with the arrival of Gally

Published by Thriftbooks.com User , 24 years ago
The Hon. Galahad Threepwood, younger brother of Lord Emsworth, is at Blandings Castle writing his memoirs, much to the consternation of their sister, Lady Constance Keeble, and many blue-blooded neighbors. Amid this, young love becomes repeatedly unstuck, imposters arrive, Baxter returns, and The Empress of Blandings is stolen. All seems lost, until ...This may be the best of the Blandings series. It introduced Gally, a charming, disreputable younger son of an Earl whose main crimes are enjoying life and refusing to be a snob. He's an older gentleman who is rarely without a whisky in his hand or a story on his lips. If you've never read Wodehouse's Blandings books, this is a good place to start, followed by its sequel, Heavy Wather.
Trustpilot
Copyright © 2022 Thriftbooks.com Terms of Use | Privacy Policy | Do Not Sell My Personal Information | Cookie Preferences | Accessibility Statement
ThriftBooks® and the ThriftBooks® logo are registered trademarks of Thrift Books Global, LLC