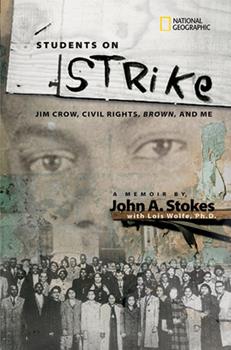 Students on Strike: Jim Crow, Civil Rights, Brown, and Me

by John A. Stokes

John Stokes has waited more than 50 years to give his eyewitness account of "The Manhattan Project." This was the name he and a group of fellow students gave their strike at R.R. Moton High School that helped to end separate schooling for blacks and whites, not only in his home state of Virginia, but throughout America. Told in Stokes' own words, the story vividly conveys how his passion for learning helped set in motion one of the most powerful movements...

Published by Thriftbooks.com User , 13 years ago
This book really brings the era of segregation to life for students in middle or high school. It also demonstrates the Brown v. Board was not a simple ruling in 1954, but the beginning of a decades-long struggle for racial equality in the schools. One of the interesting aspects of the story in Prince Edwards County was that the change was led by the students themselves. I would recommend it for educators teaching the civil rights era, because it does teach more about the experience than a textbook ever could. I would suggest this book along with Andrew Heidelberg's account of when Norfolk, Virginia's schools closed for an entire semester in 1958-1959. When Andrew was one of the 17 African-American students who were ordered by a judge to be let into white schools, Governor Almond ordered that those schools be closed based on the state constitution, which prohibited whites and blacks from attending the same school. That year 10,000 children were barred from attending school simply because politicians feared 17 black children going to white schools. The Norfolk 17 and the R.R. Moton protests are important events in the desegregation of American schools, and the stories of these students are great educational materials.

Published by Thriftbooks.com User , 13 years ago
I assigned this book for summer reading. I can write all sorts of lessons and do all sorts of activities to teach the Jim Crow Era, but this book did more to help my students understand the overt racism in America after the Civil War. They have grown up in a time of multiculturalism and diversity. The idea that students could be denied a proper education because of the color of their skin is a foreign idea. Because this story is told from the perspective of someone their age, they approached this book differently. They appreciated that it was not the usual history book, but a true story that grabbed their attention; they forgot they were learning about American History. I highly recommend this book for all high school students. Your students will thank you.

Published by Thriftbooks.com User , 13 years ago
I am ashamed to say that I was unaware of what went on in Prince Edward County, VA, in the Jim Crow South. This is a haunting recounting of a dreadful time for these young people, and it is astonishing that it went on in America! I fully understood Mr. Stoke's reasons for waiting fifty years to write this, and I hope those who may have harbored bitterness about the stand he and other brave young people took will understand it, also. I highly recommend this book!
Trustpilot
Copyright © 2022 Thriftbooks.com Terms of Use | Privacy Policy | Do Not Sell My Personal Information | Accessibility Statement
ThriftBooks® and the ThriftBooks® logo are registered trademarks of Thrift Books Global, LLC