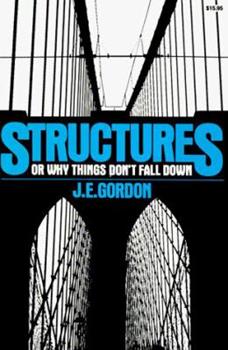 Structures: Or Why Things Don't Fall Down

For anyone who has ever wondered why suspension bridges don't collapse under eight lanes of traffic, how dams hold back--or give way under--thousands of gallons of water, or what principles guide the design of a skyscraper, a nightgown, or a kangaroo, this book will ease your anxiety and answer your questions. Structures: Or Why Things Don't Fall Down is an informal explanation of the basic forces that hold together the ordinary and essential things...

Published by Thriftbooks.com User , 13 years ago
This book is widely regarded as a masterpiece, and deservedly so. Thank goodness it's still in print! From cover to cover, the book is packed with deep and valuable insights into the behavior and design of structures, including the natural structures "designed" by evolutionary processes. And at the same time, the book is written in a delightfully chatty and unpretentious style which makes it a joy to read, and often even something of a page turner. The ideal audience is probably structural engineers, and even seasoned ones are sure to learn a thing or two. But most interested lay readers can also benefit from the book, and the author has clearly made a sincere effort to help bring the subject within their grasp. This book gets my highest possible recommendation, and the price is so low that there's no reason to hesitate to purchase it.

Thinking about becoming an Engineer? Read on

Published by Thriftbooks.com User , 20 years ago
While deciding on my major in college I read this book. It provides a good overview of Structures in terms anyone can understand. In fact, its interesting enough (most of the time) to read even if you're not interested in engineering but want to learn, well, why things don't fall down.

Published by Thriftbooks.com User , 20 years ago
This book is the only structures book that I have ever read that is fun to read! It makes use of real life exemples insted of mathematical equations. It is a common sense approach to structures.

Scientific popularisation at its best.

Published by Thriftbooks.com User , 22 years ago
In the wonderful tradition of Sagan, Cousteau and Asimov, Professor Gordon shows us that science and technology need not be abstruse and tedious, but can be made both pleasant and fascinating. Structures, or Why Things Don't Fall Down stands perfectly well on its own, but the best benefits are to be derived when reading it in tandem with its sister publication, The New Science of Strong Materials. In both books, Professor Gordon strikes the difficult balance between the ease of exposition and the exactness of detail that characterises only the very best of scientific popularisations. He combines his technical presentation with a warm and self-deprecating wit that will have you feeling that you are not being lectured to, so much as enjoying an engaging explanation from a friend.For example, in a typical moment of whimsy, Professor Gordon speculates upon the benefits of attaching army surplus chicken feathers onto motor cars - a suggestion designed to evoke a humourous image, except that his preceding explication on the structural properties of feathers is done so well that it lends the idea a certain fanciful credence. The pages are filled with such moments. Professor Gordon delights in drawing parallels between the unlikeliest of phenomena - how an intelligent reflection on the properties of worms led him to the design of a better anchor bracket, or how his introduction to a circus proprietor's somewhat self-conscious invention ended up improving everything from military aircraft to household doors. Through the liberal use of such anecdotes, he leads us, gently but inexorably, to a fuller understanding of the interconnectedness of the physical world.While his book deals with abstract ideas, Professor Gordon comes across clearly as a practical man. Whereas others would deal only with joints and fastenings, he chooses to title one chapter "Joints, Fastenings and People". He does so with especial purpose because his hands-on and sometimes tragic experience has won him the understanding that most joints fail not from want of material strength, but from human negligence. Anyone who has ever taken responsibility for the work of others will sympathise with his observation that: "All of our efforts to persuade [the aircraft workers] that a badly made joint was morally equivalent to manslaughter foundered on a deeply-held folk tradition that it was silly to fuss about such things and that strength is a boring subject anyway." Professor Gordon always manages to marry each abstraction with a human element and this is what makes his narrative so engaging and so relevant.While extremely well written, this is not a book for dilettantes. Professor Gordon does not evade mathematics, although he keeps it to a minimum and always to the point. Where necessary, he does not spare the technical details, but he has both the mastery and the skill to make it go down easily and the reader always comes away from the experience feelin

Published by Thriftbooks.com User , 23 years ago
My boss gave me this book when I arrived at my first job, and it changed the way I saw the world. It covers the basics of structural engineering from cathedrals to clothing, and does so with a blend of historical references and dry British humor that makes it delightful to read. Only basic math is used. The emphasis is on the basic principles (tension, compression, shear, etc.)and how they apply to real-world examples, ranging from bridge trusses to bias-cut fabrics and bat wings. I'd recommend this book for anyone who's curious about how things work. My sole complaint is that this edition is a bit bulky and might seem intimidating, but that's because the print is fairly large. I preferred the earlier British Penguin edition which was much more compact.
Trustpilot
Copyright © 2022 Thriftbooks.com Terms of Use | Privacy Policy | Do Not Sell or Share My Personal Information | Accessibility Statement
ThriftBooks® and the ThriftBooks® logo are registered trademarks of Thrift Books Global, LLC