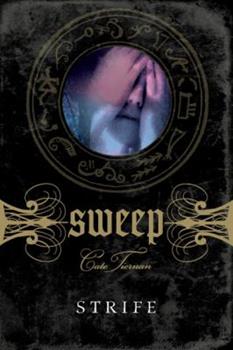 Frightening things are happening when Morgan is around. Books are flying, lightbulbs are exploding, and no one knows the cause. Morgan s friends think she s the cause of this strange activity. How can she prove she s not to blame?"

Published by Thriftbooks.com User , 12 years ago
The book was like new. It took longer than I expected to get here though. The SWEEP series is GREAT.

Published by Thriftbooks.com User , 19 years ago
Morgan's life is very similar in Strife as it was in the last book in the series. Her grades are horrible, her powers are strong but she needs to learn control, and her relationship with her parents are weak. In this book these few problems spin out of control. Morgan knows her father, Ciaran, is out there and even though the council is following him she still needs to protect herself. Hunter sets her up with a teacher that will show her out to protect herself and control her magic when strange things start to happen. Things fly everywhere, books, papers, anything at all, around Morgan. Morgan can feel that she's not doing it but who else could it be? Her father? Or someone else.TO complicate things further her parents, who have never really approved of her studying Wicca, find out about her horrible grades at school. They blame the thing that has taken up so much time in her life, Wicca. Morgan knows they are right but she cannot let go of being a witch, it's a part of her. The problem is her parents don't understand that. And if the strange power around her doesn't kill her first, she may be taken away from everything she knows.I found Strife to be an entertaining edition of the series. Like all of the books it was suspenseful, magickal, and a page turner. The problem was their was really no mystery in it. It was a tad bit predictable. But the great storyline nearly makes up for it. If you love the Sweep Series I recommend this book to you. I can't wait till the next one comes out!

LAST ONE WAS A LITTLE BETTER!! bUT THIS ONE WAS AWSOME!

Published by Thriftbooks.com User , 19 years ago
Ok, here is the review.. Hunter and Sky think its best if Morgan learns how to protect herself from her father, hes on the loose, and he might be hunting her down. So they bring in a woman to help her, her name is Eirn. She meets her at a circle, and during the circle things go balistic. Things start flying and crashing, a new member as well as others start blaming her. So after teaching her some basic protections, Eirn thinks its best if she reins (takes away) her powers for awhile. Hunter agrees, so does sky. Hunter doesn't want anything to happen to her, so her powers will be gone untill she learns more. More things happen, but morgan doesn't have her powers. (While this is all happening, he parents notice her grades going down in school. So they ground her for two weeks and say shes going to a catholic bording school!!!!) Is it her father? Or is it her? Oh! and Hunter is going some where in the end.. BUT WHERE? AND WHY?! read it! *****I think her other books were better than this one. I want to see more of Hunter and hers relationship blumeing. I would love it if he proposed to her! That would be so sweet!Peace and love! Cant wait till the next one comes out!Kari

i love this series

Published by Thriftbooks.com User , 19 years ago
I love the sweep series and this one is no exception. I liked this one because Hunter and Morgon got back together. Although i have no idea whats Alisa's problem. I think it could have been her all along. cause she happened to be at all accidents and she was the one who got sick. any ways i hope this series never ends so keep it up cate!! (but if it does end make it a good ending and no cliff-hangers please!!!!)

I can't wait for the next one

Published by Thriftbooks.com User , 19 years ago
Definitely a great book, but not the best in the series. It wasn't as suspenseful as some of the others were. But I can't wait for the next one because of how it ended. I know nothing bad can happen to Hunter, but I still thought it was sad.
Copyright © 2020 Thriftbooks.com Terms of Use | Privacy Policy | Do Not Sell My Personal Information | Accessibility Statement
ThriftBooks® and the ThriftBooks® logo are registered trademarks of Thrift Books Global, LLC