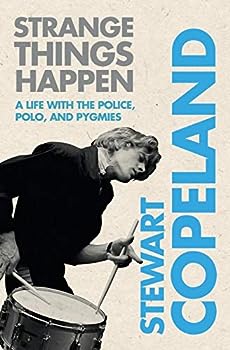 Strange Things Happen: A Life with The Police, Polo, and Pygmies

"An excellent read." -- St. Petersburg Times "An often hilarious, always candid and astutely observed memoir chronicling a life observed, largely, from the vantage point of a drum throne." -- Buffalo... This description may be from another edition of this product.

Strange Things Happen: A Life with The Police, Polo, and Pygmies

Published by Thriftbooks.com User , 13 years ago
Readers looking to find the dirt on internal Police battles from the band's heyday won't find much of it in drummer Stewart Copeland's memoir //Strange Things Happen//. The well-written and funny memoir is an entertaining journey through the strange rhythms, adventures, ritual, and mojo after the breakup of the trio rock sensation of the 1980s. It starts just about when he looks in his closet at his "exotic collection of leather pants, hostile shirts and pointy shoes," and realizes he is a forty-something father of seven children, a "tax-paying, property-owning, investment-holding lotus-eater" and, therefore, has nothing to wear. Copeland's life didn't end with the band. He is a sought-after composer of film and, of all things, opera. He still rocks. And he has played polo with none other than Prince Charles. ||He dips back, of course, into his childhood in Lebanon, where he lived with his secret-agent father and played with the kids of other secret-agents. In the final section of the story, he describes The Police reunion tour of 2007 and 2008, and the reader gets some flashes into the creative differences that may have forced the band's demise at the height of its fame, and a bit of a peak into "Stingo" moodiness. He had to include it. This is the stuff that makes rock-n-roll memoir. Reviewed by Robin Martin

Published by Thriftbooks.com User , 13 years ago
I Purchased this book recently and it was read within 3 days! I am a huge Sting/Police fan and always found Stewart a bit standoffish ? aloof ?and at times a bit arrogant..surprise surprise!!I really enjoyed the book.. He and "Stingo", have a love/ hate relationship as Sting is always trying to control the machine in which they call the police. It is an insite to a deeper thinking talented man that has written the book,its not your typical autobiography with possible conversations of times past and events. I think thats what gives the book its charm.. I have a deep respect now for this man, and his work. he really has carved a career that far outstretches the police. and he still is a BRILLIANT DRUMMER from one of the hottest bands ever to have inhabited the earth.. thanks Mr Copeland..

Published by Thriftbooks.com User , 13 years ago
As a member of Stewart Copeland's online community, I am familiar with most of the text from this book. More than a few passages originated as posts from The Man himself. Still, there was enough unheard info here, at least to me, to warrant adding this to my library. Actually, I'm such a fan of The Police that it would have been added to my library either way! The posts from the road during that band's historic reunion tour are entertaining. Stewart's film making adventures in the far corners of the earth are hilarious. Most insightful to me were the chapters in which Stewart tries to explain his role in the band and his goal to please Sting, and how frustrated he felt when he could not do that. How many years Stewart must have waited to say those things. Having met the man in person, I can say that his charm translates to page very well. I was a bit surprised that Stewart largely ignored the death of his brother Ian, but I suppose the pain of that loss is still too fresh in the Copeland family. I finished this book in about two days. I tore through it. A great read!

This might not be the book you are looking for...

Published by Thriftbooks.com User , 13 years ago
I feel a little bit like pulling a Jedi Mind Trick here to start off this review. Or that perhaps Stewart Copeland has pulled one over on all of us readers, or that he should do before the angry shouts and rampant confusion surely begins. Police fans looking for, at long last, Stewart's definitive statement on The Police? *handwave* "This is not the book you are looking for." As far as I see it, Stewart made his definitive statement on the early Police years with Everyone Stares: The Police Inside Out. If you're expecting much more here, you'll be disappointed, although there are a few brilliant gems of observation that slip through the cracks when and where you least expect it. Diehard Stewart fans--the self-proclaimed Nutters and Snarks--looking for deep personal insight and a detailed history of Stewart's life and all his various projects? *handwave* "This is not the book you are looking for." Stewart Copeland is not here to divulge all his secrets, nor dish the dirt on his past relationships, musical or personal. If you're looking for either type of information, you'll be highly disappointed (go read band mate Andy Summers' book "One Train Later" instead). What Stewart is here to do is share some stories with us, and most of these stories are quite lighthearted and fun in their nature and tone. They're the kind of stories you'd share at a dinner party to good friends, people who will get all the in-jokes and references you'll be making. It's no wonder that when Stewart first shared some of these stories on his website, it was in a section of the site entitled "Stewart's Dinner Tales". But if you're looking for a traditional autobiography? Seriously, listen carefully to me, right now: "This is not the book you are looking for." * * * Structurally? Strange Things Happen is kind of a massive hot mess. It's divided into four sections: Stewart's early life (where he sticks The Police); immediately after The Police; the years 2000 - (roughly) 2007; and lastly the reunion tour. I found myself oddly reminded of a Kurt Vonnegut novel as I read through it all, with the various chapters jumping here and there through time--some very short, some longer; the narration from Everyone Stares stuck in-between the prose as a substitute for a developed chapter on the Police's early years. However this jumpy shatter-shot structure seemed to emphasize the surreal nature of some of these events and adventures Stewart describes in his tall (drummer) tales. How does one go from being at the top of the world with The Police to seeking out pygmy tribes in Africa? Playing polo matches against Prince Charles? Becoming a reality show "celebrity"/villian? It's a wild life story that probably could have filled several volumes if described in detail, but that's not the intent here. We get the highlight reel instead--and with Stewart's clever prose and eye for pertinent, well-chosen detail, a great deal is often revealed in just a few words or sentences. Som

Published by Thriftbooks.com User , 13 years ago
Stewart Copeland's first foray into publishing, "Strange Things Happen: A Life with The Police, Polo, and Pygmies," is in itself wonderful and strange. In addition to his storied career as drummer for 1980s juggernaut The Police, Copeland has a slew of other abilities: film composer, videographer, musical-instrument-inventor. Luckily for the reader one of Copeland's additional talents is a flair for hilarious, insightful prose. It seems unlikely that a person known for generating a theatrical hail of thunder on stage would generate this, one of the rarest of items in the rock world: a memoir nearly devoid of pretense or self-deception. Yet the book is 300+ pages of exuberant recollection, without the abundance of twisted rationalization so common in the rock genre. Copeland on music, pg. 18: "I am nothing, no one. Just the beating heart of a larger body, enveloped by the soul of the faithful. A synapse closes in the mind of the enraptured protoshaman. Next morning, when my head clears, it seems obvious that music isn't just a tool or weapon, it's what my life is for. It's powerful juju, and I want to own it as much as it owns me." Some of the tales here will be familiar to readers of Copeland's official website, on which he's maintained a trove of first person essays for the past couple of years, the felicitously-titled "Dinner Tales." However, only a couple of the chapters are pulled word-for-word from the website - and, as a plus for Copeland-philes of recent vintage, there's an entire new chapter concerning a green-flag project conducted during the 2007-2008 Police tour by the denizens of the website itself. In addition to entertaining bons mots on subjects as diverse as Gene Simmons' organization of the kids' school choir and the hoi polloi of the Brazzaville, Congo immigration authority, Copeland pulls no punches when it comes to ladling out an occasional deserved black eye: the founders of Cleveland's Rock Hall of Fame are described as "fat cats" trying to convince musicians of their importance in order to gain access. It's actually quite a refreshing side of Copeland's personality; most big-time rock musicians are too cowed by what one might assume is fear of lawsuits to dish anything containing much substance. Of course, many will review this book looking for juicy details on Copeland's reputed stormy relationship with former bandmate Sting. Unfortunately for those readers, there's nothing new here on the subject, other than a few generalities. One common complaint about this book will inevitably be its lack of inside detail on the years of meteoric rise to fame by The Police. According to Giovanni Pollastri, Copeland's sometime promoter and manager of his official website, Copeland simply believes he's already revealed most interesting tidbits on the subject of his seminal band. There's plenty more to the man and the music, so why not provide details of lesser-known aspects of his life and career? The downside
Trustpilot
Copyright © 2022 Thriftbooks.com Terms of Use | Privacy Policy | Do Not Sell My Personal Information | Cookie Preferences | Accessibility Statement
ThriftBooks® and the ThriftBooks® logo are registered trademarks of Thrift Books Global, LLC