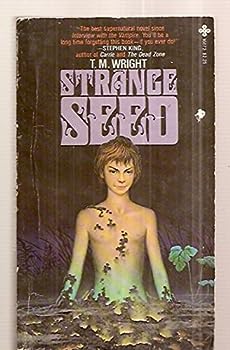 (Book #1 in the Strange Seed Series)

This description may be from another edition of this product. Rachel's new home, a huge, ramshackle old farmhouse, was sited next to a vast, dark forest. As her husband became more and more introspective, she was drawn to the encroaching woodland, and the...

Published by Thriftbooks.com User , 16 years ago
I don't know what all these people are arguing about. I read this book years ago, when I was living in a cabin in a canyon in the Rockies, surrounded by wilderness. The book was chilling and eerie, though you never quite got what exactly was going on. Very mysterious. This is the kind of horror I like, and not too many authors write it any more. I also read People Of The Dark, which was a similar sequel and equally unsettling, and then some of the author's more recent stories which were set in the city. I prefer the rural stories to the urban ones. I highly recommend this book for those who like creepy rural horror that is not as in your face as what currently seems to be in vogue.

Jeez, doesn't anyone GET it?

Published by Thriftbooks.com User , 19 years ago
First of all, the last reviewer didn't even get the name of one of the main characters right, and he certainly didn't GET what the novel was about. Perhaps he should try to read it again, "tiresome" as it is or not.The book is, actually, on a number of "Best of the Genre" lists, including one by Stephen King (in Danse Macabre) and one by Douglas Winter, and several others. Sure it's atmospheric, but the atmosphere draws you into the characters, and their inevitable doom. At least that's what it did for me.The reviewer, whether or not it was Mr. Wright (to whom I am not related, by the way) got it right when he or she said that the book was not for the "MTV" generation, as the previous reviewer so clearly demonstrates.

Published by Thriftbooks.com User , 20 years ago
Some people don't seem to get this book. That's okay. It's on a dozen "Best of the Genre" lists, and is considered something of a classic. It's not simply about a "weird Freudian thing" involving "demonic children borne of the earth," though I don't expect members of the MTV generation to understand that. It's about a man's search for identity, for his personhood. And, by the way, there are five books in the series, not just two.
Copyright © 2020 Thriftbooks.com Terms of Use | Privacy Policy | Do Not Sell My Personal Information | Accessibility Statement
ThriftBooks® and the ThriftBooks® logo are registered trademarks of Thrift Books Global, LLC