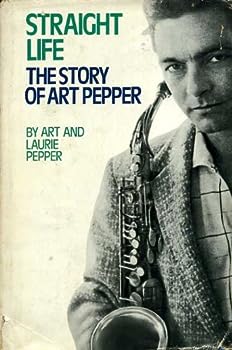 by Art Pepper and Laurie Pepper

Art Pepper (1925-1982) was called the greatest alto saxophonist of the post-Charlie Parker generation. But his autobiography, Straight Life , is much more than a jazz book--it is one of the most... This description may be from another edition of this product.

Impossible To Put Down

Published by Thriftbooks.com User , 16 years ago
I just finished this book, and would already place it in my all-time Top Ten Greatest Books List. This book is mesmerizing from start to finish. He doesn't say as much about the actual art of jazz as I would have liked, but reading "Straight Life" is like reading a film noir from mid-20th century L.A. Proof that truth is stranger than fiction. Art Pepper was a complete and total racist (he grew up in Watts, but blames black people for A) kicking him out of Watts, and B) their attitudes, which "turned" him into a racist). He was a junkie almost from day one, and used drugs literally until the end of his life. But if you've ever owned an Art Pepper CD, you also know that he was one of the greatest to ever pick up a saxophone. Pepper's accounts of his time in San Quentin Prison (where he spent much of the 1960s) are unreal. After he got out, he became even more addicted to drugs, then joined a SoCal drug rehab center in 1969, which can be best described as a cult. Clearly, they didn't know what they were doing in those days to treat drug addiction. He also made some of his best music in the late 70s and early 80s, right before he died, which is a minor miracle. He should have called the book Sad Life, because in the end that's what it was. His own mother didn't even want him, and tried to kill her unborn child through excessive drinking, drugs and smoking. He really didn't have much of a home life, which doesn't excuse his later actions, but it makes his escape from that life a true miracle. Basically, he had nothing going for him but his God-given ability to blow a horn beautifully. It's hard to reconcile his life with the fact that he was an incredible saxophone player. In the end, this book really made me angry because he had so much talent and completely threw it all away. But he was also a guy who was truly afraid of success and would rather be in prison than a major star. That made me sad. His CDs have now taken on a completely new meaning for me, one that I am not sure I like. Again, I just finished it and it is obviously sticking with me. Clearly, I am moved enough to get on this site and write about it. Top Ten for sure. Wow.

Published by Thriftbooks.com User , 17 years ago
This brutal portrait of jazz virtuoso Art Pepper reads like a Bosch painting of the infernal pits of Hell...from drug addiction to peeping tom to armed robbery ... and doin time in San Quentin Art Pepper's fall from grace and eventual comeback late in life is related in hard as nails prose...throw in some of the best accounts of Jazz biography with opinions and rants on Miles Davis, Coletrane, Louis Armstrong and others and you have a redemptive, brutal look into the tortured heart of a true criminal/addict/musician...for Pepper was all three and considered each elemental in the struggle of his existence...

Intense and gripping as one of his late period sax solos

Published by Thriftbooks.com User , 19 years ago
There's no insight into Art's music here on a technical level, but it's very revealing on an emotional level. Once he started using heroin, his life became a self-destructive cycle of endless quests for the next fix. This is more of a junkie-prison memoir than a story of jazz music, although heroin was tragically a common thread in the lives of many jazz musicians of his era. Unfortunately for Art, he spent more time in jail than most of his peers did for those illegal pleasures. His experience appears to belie the gateway theory on marijuana, since he was only a casual user of pot before he started on heroin, and it was no more significant to him than alcohol. He relates little interest in marijuana or alcohol once he started on heroin, though he popped plenty of pills and even sniffed glue in his efforts to calm the monkey on his back and relieve his need for smack. If anything, tobacco might have been the real gateway drug for Art, since his inability to kick that habit was the thing that eventually forced him to leave the Syanon rehab center.I strongly recommend this book to any fan of Art's who'd like to have some idea of what might have been going on in his head during his different recording periods, or anyone else who might appreciate a brutal, unflinching account of an addict's life.

Published by Thriftbooks.com User , 19 years ago
Just an incredible book/life/story of a jazz genius who was hooked on heroin (and then later toward the end of his life on cocaine, etc.) Pepper pulls no punches in the telling. It's all here. While you appreciate the guy's honesty (and love him for it) you can't help but shake your head and feel so damn sad and awful at the hell he put himself through with all the drugs he shot up/used/consumed... Why? Why did he have to go that route? I'm not judging here; we all have our weaknesses, but you can't help but feel shocked at the toll all the smack he shot up took on this guy (you have never met, but feel that you know and give a damn about the same way you would any friend.) I also recommend the video. There is a scene there in the third act, where Art is playing a tune called Our Song on his record player (with his wife Laurie sitting also nearby listening to this beautiful piece of music that he had written for her, for the love that he felt for his lady) and Art is saying: "That's it; that's the best that I can do. It took 51 years to be able to do that..." And I have to tell you it hit me pretty hard as I sat in front of my set watching/listening to this music that Art had created... Art Pepper, an original. I wish he were around. Yeah, I know, there's the music he left behind...it isn't enough. I miss the guy, even though I never met him. I have a feeling you'll feel the same way after reading Straight Life.

Published by Thriftbooks.com User , 22 years ago
Straight Life is at once an all revealing portrait of man and musician. The battle for sanity, sobriety and identity. There is a little bit of Art Pepper in all of us. I could not put the book down. Well worth re-reading.
Copyright © 2022 Thriftbooks.com Terms of Use | Privacy Policy | Do Not Sell My Personal Information | Accessibility Statement
ThriftBooks® and the ThriftBooks® logo are registered trademarks of Thrift Books Global, LLC