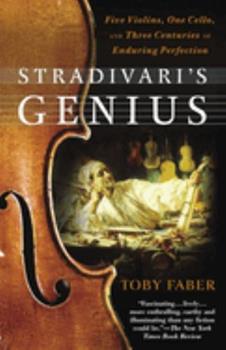 Antonio Stradivari (1644--1737) was a perfectionist whose single-minded pursuit of excellence changed the world of music. In the course of his long career in the northern Italian city of Cremona, he created more than a thousand stringed instruments; approximately six hundred survive, their quality unequalled by any subsequent violin-maker. In this fascinating book, Toby Faber traces the rich, multilayered stories of six of these peerless creations-five...

Published by Thriftbooks.com User , 14 years ago
Interested in learning violin structure and repair, I felt the need to know a bit about the famous violin makers of the world. I highly recommend this book as it was very informative and actually a great read as I felt drawn to know more and more about the great Stradivari. Jim

Published by Thriftbooks.com User , 15 years ago
I was out the other week searching for new books to read and came across Stradivari's Violins. A self-avowed classical music fan, I started leafing through the pages to see if the book would spark my interest. Well, a day and a half later and the book was completed, leaving me wanting for more! An outstanding read, the book chronicles the birth and subsequent history of five violins and one cello, over the course of time and history. If you are interested at all in history, music history, classical prose, or any genre in the history/music categories, this book would be a great read. It appeals to a large audience I think, and for fans of the movie the Red Violin, this book would make a great companion piece, although that movie was about a violin not covered within the pages, the Red Mendelssohn. Now in paperback, this book is definitely a bargain!

the genius of mr faber

Published by Thriftbooks.com User , 15 years ago
this book is a must for all music lovers. it is factual without being boring and mr faber does a great job telling his story. i couldn't put i down and i don't even play an instrument. a great read!

The Intrigue & Fame of A Stradivari

Published by Thriftbooks.com User , 16 years ago
One of the fun things for this reader is to search the New Non-Fiction Display at my favorite bookseller. There I look for the fascinating work that is not one of my areas of interest, e.g. recently I have found three such of these: Bobby Fischer Goes to War; An Imperfect God: George Washington's Slaves & The Creation of America; and now this fascinating work on the infamous violin maker. What strikes one about this attempt to probe this mysterious violin giant is that the mystery like so many remains unsolved. How did he manage to create instruments that no one has been able to duplicate to date? The angles, the varnish, the wood, the maturation. They all continue to be analyzed. Even all the modern technology hasn't been able to understand nor exceed this Italian craftman's abilities. Faber, a young violinist once, becomes intrigued with the mystery after reading about the contention over the possible forgery of "The Messiah," Strad's most popular instrument. So he begins looking at this man from Cremona, Italy and tracing six of his instruments, and their players, their owners, their trading. So the epicenter of the stringed instrument world has shifted from Italy to Paris to London to NY City. Could the Third World be next. Authenticity for buyers becomes solely word of expert analysis and insight. Millions paid for one Strad. Most readers will be exposed to giants of the stringed instrument world that they never have known, such as Davidov, Lipinski, Bohm, Marie Hall, Tarisio, et al. Strads go through many players that many will recognize, e.g. Yo-Yo Ma, Paganini, du Pre, etc. This is really a most interesting journey through one of the most popular musical instrumnet and its genius maker. Faber pokes and probes this mystery from many angles and views, leaving much of this intrigue an open question, but not forsaking his research conclusions. Great appendices with a useful glossary, chronology, exhange rate analysis. A wonderful, enlightening read.

Published by Thriftbooks.com User , 16 years ago
Quick, name a violin maker. For most people, there is only one name that comes to mind, Stradivarius (or in non-Latin form, Stradivari). It is not so surprising that the name lives on: "More than 250 years after his death, Stradivari's violins and cellos remain the best in the world." So writes Tony Faber in _Stradivari's Genius: Five Violins, One Cello, and Three Centuries of Enduring Perfection_ (Random House). The master made more than a thousand instruments and six hundred are documented as still surviving. Faber has chosen six Strads upon which to fasten a story of art, history, and science. He admits they aren't the most celebrated instruments, nor are they all now used by famous players (in fact, only two are being played at all). But in examining them, we get an idea of what makes the brand so special, and why they are so fervently beloved by listeners and players, and sometimes so firmly locked up by museums and collectors that they cannot come out and play. Stradivari was born in 1644, in or near the Amati family home, Cremona, Italy. He lived to be 93, working all his years, and fathered eleven children, but not a family dynasty of instrument makers. His instruments, mainly violins and cellos, but also a few violas and a single harp, were valued in his own lifetime, and he was wealthy. The instruments were eventually perfect for playing in large halls because of their ability to project their sound. It was as if Stradivari predicted that larger halls and a romantic sound were going to come into permanent fashion. At least partially because of Stradivari, violins have a prominence as the chief instrument of the orchestra. Faber follows the fortunes of five of Stradivari's violins - the _Lipinski_, the _Viotti_, the _Messiah_, the _Paganini_ and the _Khevenhuller_ - and of one cello, the _Davidov_ (now played by Yo Yo Ma). Stradivari didn't name his instruments; they acquired names usually from famous owners. Not the Messiah! The way it got its name is typical of anecdotes in this book. The instruments have all been sold and handed down many times (some of them have holes in their provenance, periods of time when no one knows where they were). The yet-to-be-named _Messiah_ was in possession of a certain dealer, one Luigi Tarisio, a carpenter and violinist who loved instruments from Cremona. He made trips to Paris to sell off parts of his collection (sometimes with "a little judicious forgery," as he was a bit of a trickster), but he teased potential Parisian purchasers by not bringing along what he told them was a perfect 1716 Stradivarius. During one such visit, the violinist Delphin Alard exclaimed in exasperation, "So, your violin is like the Messiah, always expected and it never appears." The name stuck, and the _Messiah_ eventually appeared, of course, but it almost never made a sound. More than any other Strad, its lifetime has included being owned without being played. That controversy was settled by scie

Stradivari's Genius: Five Violins, One Cello, and Three Centuries of Enduring Perfection Mentions in Our Blog 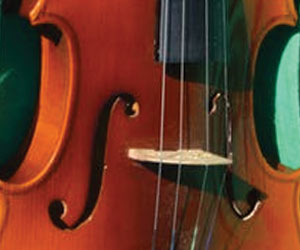 12 Reasons Why Stradivarii Sing in Celebration of National Violin Day
Published by Beth Clark • December 13, 2018
With only 500 left in the world, the ethereal and legendary Stradivarius violin is a work of alchemical art that some of us will get to see, a few will get to hear, and a handful may get to touch, but only the true elite of the musical world (or the extremely rich) will ever get to play. Below are 12 reasons why Stradivarii are unique and worthy of reverence.
Read Article
Copyright © 2022 Thriftbooks.com Terms of Use | Privacy Policy | Do Not Sell My Personal Information | Accessibility Statement
ThriftBooks® and the ThriftBooks® logo are registered trademarks of Thrift Books Global, LLC