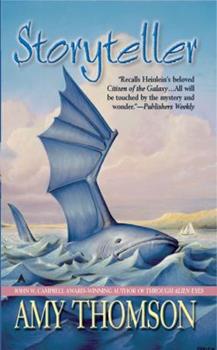 National bestselling and Joseph W. Campbell Award-winning author. On Thalassa, storytelling is Teller's life. With the great sea-beast to whom she is telepathically bonded, she travels Thalassa's many oceans. But Teller has a secret--and when her young apprentice discovers it, he will be changed profoundly.

Published by Thriftbooks.com User , 13 years ago
very worthwhile read. She creates a believeable world with characters you care about including the native lifeforms of the colonized planet that are whalelike creatures with the ability to talk to some humans through mindsong. This is the story of symbiotic relationships.

"Teller Will Be Waiting for You..."

Published by Thriftbooks.com User , 16 years ago
I was hesitant as I started the book - it shuffled along at a halting pace for the first chapter or so as histories and characters were laid out. Once the strong voice of Teller was established, however, the book sailed along cleanly. The myth of The Pilot, the life of Teller and her adopted son, Samad - all revolving around choices and growth - moved me immensely. Surviving great losses being a central theme to the book - the sort of losses that all involved see no way through and yet years later can look back at with a realization of a passage or a lesson learned. Amy Thomson handles all of this with extreme care - the tender relationship that grows fiercely personal between Teller and Samad, Teller's long-time lover, Florio, the people that both Samad and Teller interact with. I agree with another reviewer, however, that Thomson really dumps the emotional growth side of Samad's sexuality right into the gutter. Samad's homosexuality is a casual jibe between he and Teller, a thing that happens after dark at shipyards and parks and fast - a thing that fades in the day. Some part of that might be a growth process for Samad - wild, reckless and unwilling to form long-term relationships with others outside of his 'family' and perhaps at the close of the book the mature Samad who begins to find his own voice and way in the world of Thalassa & harsels will be the Samad who also develops lasting relationships with other men - perhaps. But this is just a tic of the book - and should not distract from the central message and themes. This book was cathartic for me and had me a bit emotional (happy & sad) as the book drew the its end and sailed away into the sunset.

A thoughtful and insightful look at life choices

Published by Thriftbooks.com User , 16 years ago
I found Storyteller's approach to the issues of loss, abandonment, personal choices and societal compassion to be compelling and insightful. I have consistently enjoyed Ms. Thomson's perspective on our cultural and societal mores and on ways that we might modify them to create a more caring and compassionate culture that still allows for individual choice and personal freedom. Starting with Teller's hesitance to take on responsibility for Samad the child through to Samad's final determination to forgo a life choice that appeared to offer greater immediate personal freedom and instead make the choice that carried greater responsibility but, ultimately, greater freedom, I found that Ms. Thomson addressed the issue of choices and results in a compelling and intelligent fashion. Her approach to parenting and the limits that a parent can choose to impose upon parental controls and influence in order to assure that a child grows to take on full ownership of personal choices and their results provides a rational and sensible method for our own times. I did find the representation of Samad's sexual awakening and subsequent choices to be handled in a cursory fashion that left me feeling that his choices were poorly considered and unhealthy. That those choices, as represented, match the choices of many of our own time and place is realistic and unnerving. Since the issue was addressed on any level, I would have liked there to be some resolution to Samad's sexual life. Was he ever able to have a loving and sexually intimate relationship? Overall, I would recommend this book and all of Ms. Thomson's works. It is intelligently written and well constructed.

the choices we make

Published by Thriftbooks.com User , 18 years ago
Humanity has come the the planet Thalassa, but they are not the only sentient beings living there. The acquatic, telepathic harsel live in the oceans. How both come to live together in a harmony as rare as it is wonderful, is this fine story of choices, the choices humankind must make to live in peace out among the stars, to the inner choices we all make. A fine story, beautifully done, I highly recommend it

Published by Thriftbooks.com User , 18 years ago
The planet of Thalassa is mostly a water world with two million inhabitants spread out on numerous islands. The first person who lived on that world was the pilot who burned out on her last Jump and was stranded. Jumping is so addictive that the pilot wanted to die but the harsel (a sea creature similar to a whale) bonded with her and refused to let her pass away. Together they explored The Pilot's new world and when the colonists came, she was able to hide herself in plain sight.Centuries later in a small village, the Guild storyteller Teller notices the street child Samad and informally adopts him. He learns to love her harsel Abeha, who encourages the closeness Teller feels for Samad for soon she will become a female and have her eggs fertilized. After she gives birth she will die and Abeha wants to make sure her human will not follow her by giving her someone else to love. The plan works better than anyone, especially Samad, expected.This is a rich, in depth cultural look at a society that is not technologically advanced. Those humans that can bond with harsels form a communication web that allows an island society to stay in touch with another. It is gratifyng to watch Samad change from a frightened street kid to an adult who bears his losses and responsibilities with dignity and honor. STORYTELLER is a unique, amazing reading experience.Harriet Klausner
Copyright © 2022 Thriftbooks.com Terms of Use | Privacy Policy | Do Not Sell My Personal Information | Accessibility Statement
ThriftBooks® and the ThriftBooks® logo are registered trademarks of Thrift Books Global, LLC