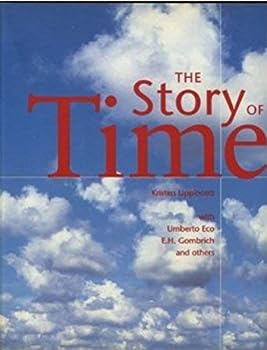 The Story of Time

Exploring this elusive and often controversial subject, Umberto Eco, Sir Ernst Gombrich, and others contributes essays and reflections on the meaning of time. This description may be from another edition of this product.

Published by Thriftbooks.com User , 16 years ago
I wish I had more time to read and read this book! It is huge, and contains a giant mish-mash of material---many, many pieces of artwork with a connection to time, many essays about the role of time in various cultures, lots of photos of timepieces through the ages---even all sorts of words from many languages for days of the weeks and months, running along the page bottoms! I read the book not being aware it was really a catalog for an exhibition, and knowing that now, it makes more sense, as I did start to wonder when reading it why there was such a huge emphasis on physical objects representing or measuring time. Time itself is such an abstract concept that it seemed odd to represent it so visually, but it's very interesting, and some of the artwork was amazing. I most loved looking at a series of pictures of one couple in front of their Christmas tree taken over 45 years---seeing how they aged was really compelling. I do think I would have liked a little more of an organized feel to this book. It seemed like I was walking randomly around a museum---not a bad feeling, but a little overwhelming! I'd also have liked a little more about the scientific side of time rather than just the cultural, as the title implies this is a comprehensize work. However, certainly a fascinating work and one I would love to just look over for days and days!

An illustrated Encyclopedia of Time

Published by Thriftbooks.com User , 20 years ago
This beautifully designed and printed book was actually the catalogue of the exhibition "The Story of Time" which was hosted by the National Maritime Museum and the Royal Observatory at Greenwich. Already from the introductions of the directors of these institutions, as well as a Preface Essay entitled "Times" by Umberto Eco, the reader will be aware of the high standard of this publication. It is an attempt to depict the human experience with time in all its forms.The catalogue is divided into five main sections: 1.) "The Creation of Time": A brief survey of early concepts of time in different cultures, for example, Biblical, Hindu, Native American, and Maori. 2.) "The Measurement of Time": The different modes of measuring time beginning with early calendars in different cultures, progressing to early european mechanical clocks, and culminating with chronometers and radio controlled clocks. 3.) "The Depiction of Time": In Painting, Sculpture, Calligraphy and Allegory. From Breughel to Chinese Sculpture this chapter shows the obsession of depicting time in art and in symbolizing it. 4.) "The Experience of Time": Here other ways of experiencing time are discussed, in music, historical time, human time and time in culture. 5.) "The End of Time": A brief chapter in which different conceptions are shown how it would be possible for time to end (and when) and different historical and contemporary depictions are shown.Sections 2.) and 3.) are by far the largest, which is obvious from their subject matter, and the fact that this is an exhibition catalogue. Interspersed in all five sections are interesting essays on different aspects of time and its influence and pre-occupation on human beings, by well known scholars such as E.H. Gombrich. These range from "Inuit Time" to "Time in the History of Medecine". Most fascinating are the hundreds of excellent illustrations, mostly of time keeping devices and time in art representing many cultures and time periods. The book is handsomely bound, well printed and presented and the illustrations are clear. This book is encyclopedic in its scope and is fascinating to read. It is reasonably priced and highly recommended.

Published by Thriftbooks.com User , 22 years ago
A varied and comprehensive tome on time and what it does to us. The illustrations are organized in such a way that one feels as if one is swimming in a treasure chest of global artifacts. I ADORE IT!
Copyright © 2022 Thriftbooks.com Terms of Use | Privacy Policy | Do Not Sell My Personal Information | Accessibility Statement
ThriftBooks® and the ThriftBooks® logo are registered trademarks of Thrift Books Global, LLC