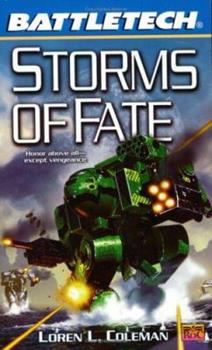 As the civil war within the Federated Commonwealth rages on, someone plans a strike that could put it all to an end. This description may be from another edition of this product.

A Solid Addition to the Shelves of Battletech Fans

Published by Thriftbooks.com User , 20 years ago
Like its sister book Patriots and Tyrants, Storms of Fate is a very solid book. As I have noticed, many Stackpole fans grieve his departure from FASA and criticize Coleman's work. I find Coleman's style much more interesting. He has a much more personal insight to his characters and, overall, I like his version of Victor Davion much better than Stackpole's. Storms of Fate begins with a bang with a terrible twist involving the assassination of a person very dear to Victor. It rises continually in action involving the politics of the Star League Council and it ends and leaves you hanging and hungering for more. The political issues in this book are masterfully created and I believe that Coleman lives up to, if not surpasses, Stackpole's legacy. Read this book. You will not be able to set it down. This is definitely worth your six bucks.

Coleman is at his best

Published by Thriftbooks.com User , 20 years ago
Well, since I have been reading/playing battletech for years now, I imagine I have some seniority on the matter. This book, while still the same civil war does much to keep it from tiring. In this novel specifically, we loose a charecter, see a charecter at their worst, and see an old charecter come back from the grave, such as it were. If you are not already an avid fan/reader of the Battletech series, this may not be a spectacular place to start, but as long as you have read one or two books in the series and know the politics and such in general, this is a spectacular book. It brings the current story closer to a close (which any good reader knows won't stay closed), and opens up new possibilites with the election of a "fair" Star Leauge ruler and the addition of two new member states to the leauge. Nobody does them like Coleman.

Published by Thriftbooks.com User , 20 years ago
Great Classic Battletech novel. The story line continues its twists and turns between Victor and Katherine up til the last page. Loren L.Coleman really draws you into the story, enjoy!

Published by Thriftbooks.com User , 20 years ago
The battletech series is one of the longer running and larger series out there. That alone should be enough to recommend this book. But New battletech and Old are now quite different. The stories are still great but some of the detail has been lost.Take Storm of Fate. It is a very good Battletech book with all the great battles and intrigue that you would expect. The story line is also very gripping. But it isn't the space oddessy's that Stackpole wrote back in the day. One may argue that this book is almost as good but one thing about Stackpole(an origional B-Tech writer who is now on Star Wars) was his amazing detail. And the other B-tech writers were not far behind him. Now, they all seem to be letting it off some.

Published by Thriftbooks.com User , 20 years ago
I think that this book is a worthy addition to the battletech universe. It starts out a couple months after the second battle of Coventry, as Victor fights against a new lyran general in the ongoing civil war. You will see familiar characters along the way, but not much of them. From the lyran theater to the star league conference to Tikonov, Victor fights against Katherine and his own tragic loss. Overall, the book is good, but it could have been a lot better if it was longer.
Trustpilot
Copyright © 2022 Thriftbooks.com Terms of Use | Privacy Policy | Do Not Sell or Share My Personal Information | Accessibility Statement
ThriftBooks® and the ThriftBooks® logo are registered trademarks of Thrift Books Global, LLC