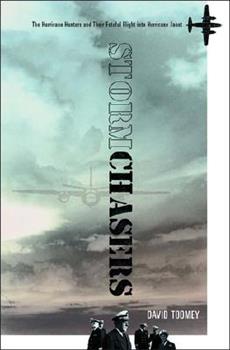 Stormchasers: The Hurricane Hunters and Their Fateful Flight Into Hurricane Janet

Describes the role of the military weather reconnaissance squadrons who tracked and studied hurricanes, focusing on naval officer Grover B. Windham and his crew, who, in September 1955, paid the ultimate price during their mission.

"There are bold pilots and there are old pilots,but there are no bold,old pilots."

Published by Thriftbooks.com User , 16 years ago
This book has a lot more to it than suggested by its dust jacket. Rather than just a number of experiences by a few of the crews who fly into hurricanes to learn more about them;it traces the history of the individuals and their planes, as well as the theories that have been used since the end of WWII,to try and get a handle on these powerful natural occurrances,which wreck such havoc;particularly on the south-east and Gulf coasts of the US. From this book,you will become acquainted with the theories involved,the models used and the great difficulties encountered in trying to understand and thus predict the path,strength and resulting damages of hurricanes. There is only thing certain,and that is that ecah year,there will be a string of events,but try as they may,the forcasters will havetheir hands full. The expertize continues to improve,but the "science" of hurricanes is far from perfect. The book will help one to much better understand the reports we will be getting from The National Hurricane Service this coming summer and fall. It appears we are in for another wild time of it. We really gain a good insight into the power of these systems and the punishment inflicted on the planes and crews who fly into them. In spite the power it is unbelievable that only one plane and its crew ever paid the Supreme Sacrifice. The book is an excellent read for anyone interested in understanding "Hurricane Season". I think the most amazing thing that I learned from this book is that those great forces involved with these hurricanes can cause tremendous stresses on the earth's crust,resulting in accompanying earthquakes.

Published by Thriftbooks.com User , 19 years ago
In late September 1955, a tropical depression in the Caribbean became the 10th hurricane of the season--Janet. The Naval Air Station in Jacksonville followed standard procedure, sending out hurricane hunters from Gauantanamo Bay, Cuba, on what should have been a routine reconnaisance mission. But Lt. Cmdr. Grover Windham and his crew of eight never returned from their flight into the eye of the storm. What happened? Toomey recounts the possible scenarios as he reconsiders the drama, but he also uses the tragedy to discuss the relativelyprimitive state of weather prediction at the time.There was no Doppler radar, no satellite imaging, no global-positioning systems. The twin-engine Neptune plane was outfitted witht he cutting-edge technology of the day---butu meterologists used pencil and paper to make graphs, and pilots still looked at the waves below to estimate their position.Crew Five really didn't know what it would find with Hurricane Janet. It's final radio transmission at 8:30 a.m. ended, "Beginning penetration."

Published by Thriftbooks.com User , 19 years ago
This glimpse into 1940's and 50's Navy airmen's exploration of hurricanes is fascinating reading, from a scientific and a human perspective. I've never read nonfiction that captured my imagination and attention so well. It's amazing to me that this story hadn't been told before. How did we come this far into the space age without knowing that people have been flying into hurricanes to study them since the 1940's? And why did those particular people believe they could, without sophisticated instruments, fly into hurricanes and come out again? This book provides suspense while informing the reader of historic events surrounding the world of weather forecasting. I look forward to reading what David Toomey writes next.

Published by Thriftbooks.com User , 20 years ago
Before satellite weather photos, the main way of getting information on Atlantic and Caribbean hurricanes was to fly airplanes into them. It is still being done, for it is still the best means for getting the exact location of a hurricane and details such as its speed and direction. In the more than half century of countless such patrols, only one aircraft and crew have been lost. Their story is told in _Stormchasers: The Hurricane Hunters and Their Fateful Flight into Hurricane Janet_ (Norton) by David Toomey. Toomey has gone back to look at Navy documents, interviewed members of the former Weather Reconnaissance Squadron to which the flight belonged, and talked with members of the crew's families. The book has a framework of a reconstruction of the mission of the September 1955 flight, and does so with as much detail as could possibly be gathered so many years on. The story might in itself be a little thin, but Toomey has as well given a broader picture of the history of hurricane science and general meteorology.Reports of hurricanes at sea began to become practical after ships got radios; the first wireless report of a hurricane was in 1909. The program of reporting storms was a victim of its own success; ships' captains so well knew the danger of hurricanes that one report would send all ships steaming away from the source, making further data collection impossible. No one seriously proposed flying an airplane into a hurricane, because no one knew what such a flying environment would be like. The first flight into a hurricane was performed on a bet, in 1943, and afterwards other pilots wanted to try, and meteorological data started being taken. By 1955, the Weather Bureau, Navy, and Air Force had been sending official flights into massive storms for about a decade. The mission led by Navy Lieutenant Commander Grover B. Windham into the dangers of Hurricane Janet in the Caribbean took place in a PV2 Neptune, which looked a little like the legendary B-17, and could take a similar amount of punishment. Toomey has recreated the flight from its beginning, out of the base at Guantanamo. He can only speculate about its end; there was a final transmission from the plane, "Beginning penetration," which meant they were entering the storm. No trace of the plane or crew was ever found, and Toomey has written three possible fatal outcomes.The details of the flight itself are well presented (and may well remind readers of The Perfect Storm), but the digressions into the important history of meteorology are fascinating. We are invited to admire that genius of amateur science, Benjamin Franklin, who noted in 1743 that a storm seemed to have tracked from Philadelphia to Boston, and who was the first to speculate that such storms travel along the country but contain winds different from their overall direction of movement. There were attempts in the last century to track a hurricane by seismograph. The reduced pressure would lift up the Earth

Published by Thriftbooks.com User , 20 years ago
For anyone who has ever been fascinated by airplanes, by meteorology, by weird and anomalous weather, "Stormchasers" is an excellent read. And for anyone who has ever been fascinated by weird and anomalous proofreading, it's even better. It all began to unravel on page 49 when I was told of the airplane "hangers" being constructed in Jacksonville. My first image was of gigantic wire objects on which airframes were hung to keep from wrinkling. When the word appeared again a few pages later, I finally checked my dictionary, aware that words sometimes become part of the language through years of misuse. Such was not the case. Apparently the proofreader figured this out after a while too, for as the book moved forward, "hangers" transmogrified into "hangars" and all was well. Except, later, in reference to the hurricane hunters, I was told that no one's interest had been "peaked." And all the time I kept saying to myself, "poor David Toomey." Here's a man whose powers of research and attention to detail seem inexhaustible, whose ability to reconstruct the events of that day (as well as the hundreds of years of storm study that preceded it) are beyond dispute, but whose reputation is ambushed at every turn by sloppy proofreading. The book, in the end, is excellent, both dramatically and scientifically. We gain an intimate knowledge of the plane's crew while being schooled in the history of modern (and sometimes ancient) meteorology. Best of all, Toomey clearly delineates life inside a P2V Neptune flying through the wall and eye of an Atlantic hurricane; and even though the title divulges the ending, it does not diminish the tension or suspense. I have been a weather "fan" all my life, but I found it humbling to learn just how little I actually know about the atmosphere. This a five-star book in every area but one, and that one is hardly the author's fault. Even though this may not be a cliffHANGER, "Stormchasers" will PIQUE your interest from the start.
Trustpilot
Copyright © 2022 Thriftbooks.com Terms of Use | Privacy Policy | Do Not Sell or Share My Personal Information | Accessibility Statement
ThriftBooks® and the ThriftBooks® logo are registered trademarks of Thrift Books Global, LLC