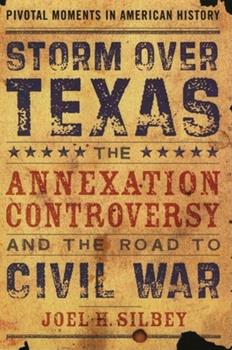 Storm Over Texas: The Annexation Controversy and the Road to Civil War

In the Spring of 1844, a fiery political conflict erupted over the admission of Texas into the Union, a hard-fought and bitter controversy that profoundly changed the course of American history. Indeed, as Joel Silbey argues in Storm Over Texas, the battle over Texas marked the crucial moment when partisan differences were transformed into a North-vs-South antagonism, and the momentum towards Civil War leaped into high gear. One of America's renowned...

Interesting take on an old question but not completely convincing

Published by Thriftbooks.com User , 14 years ago
Storm over Texas provides an excellent overview of the political turmoil that occurred between 1844 and the election of Lincoln. As part of the pivotal movements in American history series the book strives to show how this event was a significant shift in the course of United States history and in the end it succeeds. Texas proved to be a catalyst for the political disunion that lead to the Civil War. The great enemy throughout this process according to this interpretation was former president Martin Van Buren and his involvement is one of the more interesting things to be gleamed from this version of events. Like many books in this series it takes a controversial viewpoint and defends it fairly well. It is a very difficult viewpoint to sell especially given the amount of research that has been done on this point. If you are just starting out on this area of history you will probably find this book interesting. For those that have read a lot on the civil war the argument will be fun but the book will be a fast read. Overall give it a chance and get a look at a great new argument but one that is not likely to sway a lot of people.

Published by Thriftbooks.com User , 15 years ago
Joel H. Silbey's Storm over Texas and the Road to Civil War is part of a marvelous series by the Oxford University Press, Pivotal Moments in American History. While Silbey clearly has the credentials to write and opine on such topics, and indeed backs it up with extensive research, his premise, that the annexation of Texas led to the Civil War is indeed a difficult one to prove and, sadly, one even he was not up to. Clearly any expansion of the peculiar institution westward was going to tilt the balance of federal power - so weather it was Texas, Nebraska, Kansas or even the Oregon Territories is a matter for debate. Silbey does indeed show the early stages of radical sectionalism as a result of the Texas debate and the schism that had been long in developing. He also does a very commendable job in showing how the Whigs and Democrats both were effected by and affected the growing debate over a slave economy in one part of the country and a free market in another. He doesn't shy away from racist comments frequently made and nearly implicit in the minds of even abolitionist northerners. I found the book to be very educational, if certainly misnamed. The pivotal "moment" wasn't really the Annexation of Texas but rather the period of westward expansion and the questions inherent therein regarding the spread, or containment, of slavery. If Professor Silbey had allowed himself this latitude the book would have been more compelling then him trying to prove something highly difficult or impossible. With that said, this still is a valuable addition to the series.

Texas and the increase of sectional politics

Published by Thriftbooks.com User , 16 years ago
That the annexation of Texas in 1845 was the key event leading to the Civil War is Sibley's main thesis in this book. Since 1835 when Texas first petitioned for annexation, the South had always looked eagerly at the territory as a means to expand slavery. The North recognized that point, but the consensus was that the issue was not fit for national debate. But Martin Van Buren, in 1835, even though he believed with the South that slavery was a partisan issue, sided with the North in opposing annexation. When the issue surfaced again in 1843, the debate had shifted to strictly sectional lines. Soon all issues of national debate were conducted on sectional lines. As George Pugh said in 1856, "Let us turn from the constant jealousies of the North toward the South, and the South toward the North, to proceed in that path of national achievement which now invites our care," but it was not to be. With the Wilmot Proviso of 1846, sectional debate (and animosity) on the slavery issue was heightened greatly. It seemed that what Daniel Barnard of New York had predicted in 1845 was coming true: "As certain as truth and God exist, the admission of Texas into this Union will prove, sooner or later, an element of overwhelming ruin to the Republic." Silbey's account is succinct and well-presented. Recommended.

The Excitement of "Pure History"

Published by Thriftbooks.com User , 17 years ago
When one picks up a book written by an academic historian, one must be prepared to enter a literary world in which precise and dispassionate interpretation of sources makes for an exposition that may be less captivating than more lusciously contrived popular history and historical fiction. The reward for exposure to scholarly interpretation is an opportunity to understand and test a thesis, the very process of which may provide a more usable understanding of modern political currents. Much of Dr. Silbey's scholarship has been devoted to the rise of national political parties in the era of Van Buren. The collapse of this system and its replacement by political movements sensitive to sectional interests clearly fits the category of a "pivotal moment in American History." That the seeds of this transformation should be found in the politics surrounding the Annexation of Texas may seems strange in the context of the American History we were all taught in high school about the inevitability of our pursuit of our Manifest Destiny. Dr. Silbey opens up this debate and reminds us that the achievement of political consensus regarding major policy issues can be an unpredictable, uncontrollable and even a destructive process. An appreciation of the importance of visionary leadership and the building of consensus holds immediate lessons for us today. Important, too, is Dr. Silbey's distinction between "partisanship" and "sectionalism" in the era before the Civil War. In our era, the "reds and blues" of the political landscape are derived from social issues which are so profound as to be said to define "two Americas". In this context it is useful to undertand the role of "partisanship" in forging political parties with broad national appeal and the price paid when broad appeal collapses in the face of highly emotionally charged social perceptions. Dr. Silbey's book is, indeed, pure history and the excitement of a reading of his book is not so much the history he relates but, rather, the consoling sense that we have been there before and, armed with understanding, we may be able to do a better job next time.
Trustpilot
Copyright © 2022 Thriftbooks.com Terms of Use | Privacy Policy | Do Not Sell or Share My Personal Information | Accessibility Statement
ThriftBooks® and the ThriftBooks® logo are registered trademarks of Thrift Books Global, LLC