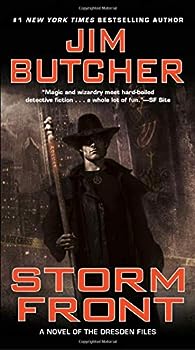 (Book #1 in the The Dresden Files Series)

This description may be from another edition of this product. In the first novel in the #1 New York Times bestselling Dresden Files series, Harry Dresden's investigation of a grisly double murder pulls him into the darkest depths of magical Chicago... As a...

Published by Nickname:Southpaw , 5 months ago
I never miss these books by Jim Butcher reread this 1st one 3 times

Published by MissAsteria , 5 months ago
I absolutely love the perception this book places on the supernatural world! I am addicted to these books and am going to fly right through the series. If you like to enjoy an easy read supernatural novel, this is for you! This is the book you don’t put down because it pulls you in.

Published by Thriftbooks.com User , 5 years ago
I adored this book. Just adored it. I'm very, very picky when it comes to fantasy - if anything feels cheesy, it's out the window and into the bin! - and as a lover of detective fiction wanting to give fantasy an honest try, this really piqued my interest. I was laughing, gasping, and on my toes the entire read. Dresden's personality is intriguing but familiar at the same time, balancing dry, dark humor with the poetry only accessible through strong first-person writing. Kept me up until 12:30 AM to finish.

Exactly what I had hoped it would be.

Published by Thriftbooks.com User , 5 years ago
This book was a fun gateway novel into Jim Butchers world. I enjoyed the grumpy wizard and couldn't put it down. Such a fun read.

Looking Forward to the TV Show!

Published by Thriftbooks.com User , 14 years ago
Storm Front is the first novel in Jim Butcher's Dresden Files series. Harry Blackstone Copperfield Dresden is a wizard, named after the famous magicians. Harry is the only Wizard listed in the Chicago phonebook. With his trusty staff and unique characters such as Bob the Skull, Harry tackles tough cases involving paranormal crimes. In Storm Front, Harry is asked by the Chicago PD's Special Investigations division to look into some mysterious murders that couldn't have been done by a normal human. When Harry deduces that the crime could have only been done by another wizard, he soon finds himself on the list of suspects. Deadly forces are at work to stop Harry from continuing his investigations. And to top it off, he's being followed by a wizard to make sure he doesn't break any of the seven laws of magic. With any slip-up, his watcher would be glad to turn him in to the White Council for judgment. The punishment for breaking any of the laws is death. With colorful characters and a suspenseful plot, Storm Front was a tremendously fun and exciting read. Action, suspense, mystery, magic, romance, comedy, and other-worldly characters - this book has it all. It's no wonder The Dresden Files has been made into a TV series for the SciFi Channel.

One of My Favorite Authors

Published by Thriftbooks.com User , 16 years ago
Jim Butcher has quickly become one of my favorite authors. This book is a fine example of why. Storm Front keeps you enthralled. You will not want to put this book down until you are done. It is believable enough as a book set in current time Chicago. Jim really did his research. Each book in this series seems to get better.

Published by Thriftbooks.com User , 21 years ago
A problem with the fantasy genre, and one many have acknowledged quite freely, is a general sense of redundancy in just about any book you see these days. "Storm Front," the first book from new author Jim Butcher, addresses those concerns head-on and introduces a new setup that pulled me in at the start and kept me from getting sleep until I had finished.The premise is simple enough: Harry Dresden is a wizard who acts about like a gumshoe. He uses his magic for harmless things, mostly, and finds things for people. But when he sets out to find a missing husband, and to solve a double homicide involving black magic, you can bet there's going to be some amazing action.Amazing action is what makes this book so absorbing, as it turns out. There are several scenes that will stay with me for a long time. Not since Dean Koontz's "Darkfall" has a single scene brought me so close to the edge of my seat as some of the scenes near the end of "Storm Front."None of that would matter, though, were it not for the incredible cast of characters. They all come to life in a way you wouldn't expect from so short a novel (well, considering the genre). Each character is different, not just someone that feels like he or she was cut from a cardboard box. I loved Bob, the talking skull with an appetite for sex. And Murphy came across as a real person. So did everyone else. The human motivations motivated me to keep going. I really couldn't set this book down until I finished it, at some point just after midnight.If Jim Butcher continues to deliver fiction like this-and I truly hope he does-then the genre has just found another master. I recommend "Storm Front" to anyone who wants to lose themselves to a humorous, action-packed variation of the modern world for a few hours. Better than a good movie.

The perfect mix of hardboiled and fantasy fiction

Published by Thriftbooks.com User , 21 years ago
Take traditional hardboiled fiction, give it a mind bending preternatural twist and you have Storm Front, the first book in a new series with the potential to send author Jim Butcher to the top of the gumshoe sub-genre of horror/fantasy fiction. Harry Dresden, the series' protagonist, is everything that's great about the hardboiled anti-hero, with a twist: He's a wizard trying to make a living working practical magic in a modern world that's foolishly rejected the supernatural in favor of science and technology. Part average guy, part renaissance man, Harry's got a dark side, a wicked sense of humor and a deeply rooted, personal code of honor that drives him to risk everything to fight the supernatural forces preying on his clients, an attitude that puts him at constant, dangerous odds with both the bad guys and the authorities alike.In Storm Front, when a routine murder investigation turns out to be anything but routine, the police reluctantly turn to Harry for help. But a case that started as a way to pay the rent soon gets complicated for Harry when he's forced to cross paths with the Chicago mob and a mysterious figure known as the Shadowman, drawing Harry into a web of black magic and danger.Already under the Doom of Damocles (a form of probation placed on him by the White Council who oversee the ethical use of magic in the world of the mundane) Harry himself falls under suspicion and is forced to risk execution to solve the mystery and stop the Shadowman, before the killer takes another victim. Storm Front is a riveting, action packed roller coaster of a novel, a damn good mystery with compelling characters set in a rich alternate reality universe where anything can happen. There's a little something for just about everyone here from black magic and the Chicago mob to vampire madams, demons and the fey. I enjoyed this novel immensely and am looking forward to the next in the series.

A wonderful start for a new series

Published by Thriftbooks.com User , 21 years ago
Harry Blackstone Copperfield Dresden's a wizard (amazingly enough, the only one listed in the yellow pages under "Wizard"), often solving crimes with a supernatural twist. So when the Chicago PD brings him in to consult on a double murder committed with magic, Harry sees a way to pay last months' rent. Unfortunately, not only does he have to find the black mage responsible, but the magic he needs to call upon might bring the unwanted attention of the White Council. They've already placed the Doom of Damocles upon him, and dabbling in black magic will mean a death sentence. And then there's the brothel owning vampiress who'd like to see him dead. And a mob boss who'd like him to mind his own business... or he'll see him dead. You start to get the feeling that Harry's not exactly the most popular guy in town.The plot combines elements of a detective novel and modern fantasy, with a healthy dose of dark humor, for an intriguing debut novel.
Copyright © 2020 Thriftbooks.com Terms of Use | Privacy Policy | Do Not Sell My Personal Information | Accessibility Statement
ThriftBooks® and the ThriftBooks® logo are registered trademarks of Thrift Books Global, LLC