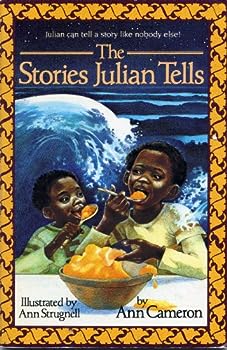 This description may be from another edition of this product. FOR USE IN SCHOOLS AND LIBRARIES ONLY. Relates episodes in seven-year-old Julian's life, which include getting into trouble with his younger brother Huey, planting a garden, trying to grow taller,...

Published by Thriftbooks.com User , 15 years ago
The Stories Julian Tells is a book that has six stories. You should read all the stories! One of the stories is about a father that makes a pudding!

Published by Thriftbooks.com User , 16 years ago
I teach third grade and just read "The Stories Julian Tells" to my students as a read-aloud. They absolutely loved this book! The five stories in the book each are a chapter, told from Julian's point of view. Julian and his little brother, Huey, get into mischief, including eating the lemon pudding their father has lovingly made as a present for their mother. The boys' parents teach them loving lessons whenever they get into trouble. This is a book that celebrates the joys of childhood. I want to read Ann Cameron's other books in the series now. Ms. Cameron truly understands what makes good reading!

The best book in the world!

Published by Thriftbooks.com User , 19 years ago
The Stories Julian tells is an exellent story. It is about a young boy named Julian who goes on adventures. One time he and his brother Huey wanted to eat a great pudding that his Dad had made but his Dad said not to touch it and they got in big trouble when they did.If you want to know what happens next just read the book.

Excellent book. I read it over and over again

Published by Thriftbooks.com User , 23 years ago
After reading the first story about the father and the lemon pudding, i just had to try some lemon pudding and now it is my favorite. All the stories are great and very interesting. I liked how Julian had such a creative imagination. I'm 11 years old and I still love to read it.

This is one to read aloud, again and again.

Published by Thriftbooks.com User , 24 years ago
One of my all-time favorite read-aloud books, with lively, expressive illustrations. This book and its sequel - More Stories Julian Tells - describes the trials and tribulations of our hero, the ever-inventive Julian. The author, Ann Cameron, lovingly shows how Julian's curiosity and voracious desire to learn get him in and out of all kinds of scrapes. For example, the unforgettable story of how Julian convinces his little brother, Huey, to taste a pudding made for their mother. Taste they do, that fabled pudding, which according to both mom and dad, tastes "like a whole raft of lemons, like a night on the sea." And they keep on tasting 'til the pudding is gone. The punishment leveled by their father - a "beating" and a "whipping" of a new pudding - is both tender and just. Cameron's creative use of language and the way she repeats key phrases, make each story memorable and a pleasure to read aloud. You won't be surprised when you hear your audience chiming in with you!
Copyright © 2020 Thriftbooks.com Terms of Use | Privacy Policy | Do Not Sell My Personal Information | Accessibility Statement
ThriftBooks® and the ThriftBooks® logo are registered trademarks of Thrift Books Global, LLC