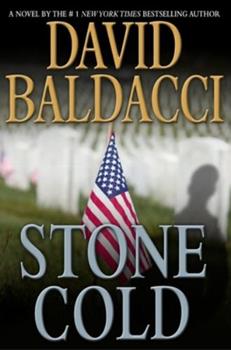 (Book #3 in the The Camel Club Series)

The #1 bestselling author of The Collectors and Simple Genius returns with STONE COLD...an unforgetable novel of revenge, conspiracy, and murder that brings a band of unlikely heroes face-to-face with their greatest threat. Oliver Stone, the leader of the mysterious group that calls itself the Camel Club, is both feared and respected by those who've crossed his path. Keeping a vigilant watch over our leaders in Washington , D.C. , the Camel Club has...

Published by Shaw is better than Hobbs , 3 years ago
This series is full of intrigue, surprises and is a page turner

Published by Thriftbooks.com User , 14 years ago
Third installment for the Camel Club... I bought this book when it first came out, but did not get to read it until this weekend. Boy, am I glad that I waited until I had the time to enjoy it. The writing was great, the story line was taut and the action flowed from beginning to end. The characters stayed true to their nature, a few of them have grown from first book to now, and... well, I don't want to give any of the story away!! There are a few intricate parts here that make the whole story more enjoyable, so I would read this when you have the time to actually do so. Skipping over paragraphs could really zap some of the meat out of this story. I highly recommend - books with heroes like these and such complex villains are hard to come by. I hope you enjoy this book as much as I did! All the best, Jay

Published by Thriftbooks.com User , 15 years ago
The David Baldacci series "Camel Club" picks right up where the other book left off. The Camel Club is made up of Oliver Stone,Milton Farb, Caleb Shaw and Reuben Rhodes. In this newest novel honorary Camel Club member Annabelle Conroy is still being pursued by casino kingpin Jerry Bagger. She had conned him for $40 million in the previous book. The chase moves from Atlantic City to Washington D.C. Annabelle's father Paddy makes an entrance in this novel. It is up to the Camel Club to save the day. Oliver Stone when he was John Carr was a member of the Triple Six Division a CIA assasination squad. Members of Carr's old unit are coming up killed. Rayfiel Solomon was assasinated by Carr under the false charges of being a traitor. Harry Finn a former Navy Seal and Department of Homeland Security employee is hunting down the members of Triple Six. He is also the son of Rayfield Solomon. There are some stunning secrets that are revealed about this kinship. Carter Gray and Senator Roger Simpson also play a prominent role in this book. This is an exciting read that has a surprise finish. Do not miss it.

The best yet in the Camel Club series!

Published by Thriftbooks.com User , 15 years ago
The eclectic crew of the Camel Club are back in action and better than ever! First, if you have not read the The Camel Club or The Collectors I highly recommend you do before starting this book. Especially read The Collectors as this is a continuation of a story line from that book. The Stone and the boys' skills are tested as they try to protect Annabella Conroy from the crazy casino owner Jerry Bagger, who Annabella has conned Millions from (see The Collectors). But Stone's attention is soon diverted when old deeds and causes come back to haunt him. Don't want to ruin the surprises but a new deadly Villain is waiting in the wings, and is killing Triple Six members one at a time, is Stone next on the list. This is a gripping, fully loaded thriller, with surprising twists that delivers on all cylinders!

Published by Thriftbooks.com User , 15 years ago
Even though I do a lot of reading, fiction isn't really my thing. In fact, I usually only read a few works of fiction each year. So, when my daughter brought home an advance reading copy of STONE COLD by David Baldacci from the bookstore where she works, I didn't get too excited about it. She told me she had read one of his books before and thought it would be something I might like. The book sat idle on the desk in my library for a couple of weeks. Then one morning, before going to the office, I had a few extra minutes and decided to take a look at it. If I lacked excitement about the book before, that lack of excitement was multiplied after reading the excruciating first sentence. It was a painful fifty-two words long and contained six commas. I looked at my watch then glanced again at the cover. "Okay Mr. Baldacci, you've got exactly twelve minutes to grab my attention." Well, guess what. Mr. Baldacci did indeed grab my attention. The first sentence turned out a poor example of Baldacci's writing style. Over the next day and half, every spare minute was spent flipping the pages of this book. Even though this is apparently the third or forth book in a series, the character development was spectacular. The story is non-stop and will have you dying to know what happens next. I hate it when reviewers give away too much storyline, so I'll limit what I tell you about the plot. Most books of this nature, I find, too much of a stretch to be believable. I only found minor instances of that here. Here's an example; as I said, Baldacci brilliantly constructs his characters. Here we have a ruthless casino owner, feared by all, known to be a dangerous man you never want to cross. Yet he employs a barmaid at the casino who is quite loose-lipped about her employer's dealings. Not likely. The reader is also asked to buy into assassinations of high ranking cold-war officials. But don't let these little trivialities stop you from enjoying a book that is non-stop action. These mistakes are few and far between and are easily overlooked. This is a book you will not want to put down. Baldacci is a champion at creating the scene on that big screen TV in your mind. In fact, this book has all the makings of a blockbuster movie. You'll see what I mean as the story unfolds. Unfortunately, as is usually the case, some pedantic, self-absorbed producer will get their hands on it and ruin a perfectly good story. I'm still not a big fiction reader. I just don't have time. But as someone who reads only a handful of fiction books each year, I'm glad this book was one of them.
Trustpilot
Copyright © 2022 Thriftbooks.com Terms of Use | Privacy Policy | Do Not Sell or Share My Personal Information | Accessibility Statement
ThriftBooks® and the ThriftBooks® logo are registered trademarks of Thrift Books Global, LLC