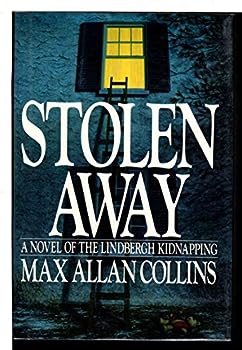 Stolen Away: A Novel of the Lindbergh Kidnapping

(Book #6 in the Nathan Heller Series)

Winner of the Shamus Award for Best Novel A $50,000 ransom. No police involvement, or else.These were the demands. And this was the crime A man walks into the Lindbergh family home and snatches up twenty-month-old baby Charles, Jr. and disappears. So begins the kidnapping that shakes the nationTwo months of torment shared with reporters and police, socialites and psychics, crooks and cranks Enter detective Nathan Heller, hand-picked by Colonel Lindbergh...

Don't let this book be stolen away!

Published by Thriftbooks.com User , 15 years ago
Another entry in the great Nathan Heller series from Collins. Everything you ever wanted to know about the Lindbergh kidnapping told in a tight story that is rich with real people of the time. This book discusses many of the theories behind one of the most infamous events of the 1930's. Get to know the scamsters who sought to profit from the kidnapping. All in all this is a rich well told tale that brings its own ideas forth. If you ever watched The Untouchables, and by the way Elliot Ness is in there, you will love this book.

Despite its flaws, one of Heller's best

Published by Thriftbooks.com User , 18 years ago
Having read all of the Nathan Heller thrillers, I have to admit that none of them are as riveting as the first two: "True Crime" and "True Detective". They're spare, lean and elegantly written. Every detail packs a wallop. The later novels, while still excellent, tend to seem bloated and self-important by comparison. The same points are made over and over, historical characters are dragged in even if they're not intrinsic to the plots, some very dull fictional characters are given too much attention and Heller becomes more and more infallible.But "Stolen Away" is still well worth reading. The background details are carefully researched and Collins does a masterful job of conjuring up the tense, post-kidnapping atmosphere of the Lindbergh home and the hysteria surrounding the investigation and the trial. Charles and Anne Lindbergh are drawn with skill and insight. And Collins presents his speculations about who was responsible for the kidnapping logically and intelligently.But Heller's ultimate conclusions about the fate of the baby are ludicrous, illogical and completely unsubstantiated by any kind of evidence. Have adhered scrupulously to the facts while drawing his conclusions throughout the book, he veers off into irresponsible fantasy at the end. It's not playing fair to the reader. Also, Heller's affair with Evalyn Walsh MacLean is just silly and unbelieveable. But Heller always has to have sex with somebody in each book and I guess she was the best available choice. At least it wasn't Anne Lindbergh.This makes it sound as though I didn't like the book, which isn't the case. I definately recommend it, with the warning that the pretension and over-writing that mar the later Heller novels make their first appearance here.

Published by Thriftbooks.com User , 19 years ago
This was the first of the "Nate Heller" detective series novels of Collins that I had read, and I must admit that I couldn't put it down. Not only is this tour de force a great mystery and suspense novel, it is also a wonderful historical novel; well researched and informative while grabbing and then not letting go of the reader's interest.The story of how Chicago policeman Heller becomes involved in the case of the Lindbergh baby kidnapping is plausible enough. Once the wise cracking detective is admitted to the inner circle of the myriad investigators and con men (and women) involved in the infamous 1932 tragedy the excitement begins and continues without let-up. I was not that familiar with the details of the case until I started this novel, but Collins does a wonderful job of making each character (both those of historical record, and those who are fictional blendings of historical characters) belivable and memorable. One strong point of the book is that I finished it feeling that I knew more about the case that I did previously. Collins posts an afterword to the book that explains which parts are fictitious, conjecture, and historical. He also presents a detailed proposed reading list for those interested, along with his comments on the bias or worth of each author. I really appreciated this part of the book.As for Heller himself, the Chicago lawman grows on you, even though Collins presents him as not always a shining knight, showing him "warts and all." The book is quite long, 593 pages in the paperback edition, including the afterword, but the complexities of the story make it a good read, well worth the time and effort. A definite 5 stars, this one made me rush out and buy up other books in the Nate Heller series, as well as check out the facts of the historical case that inspired this story. My advice is for anyone who hasn't read this novel to do the same.

Ten stars are needed for this one.

Published by Thriftbooks.com User , 20 years ago
The best entry in the Nate Heller series. Collins Nate Heller novels are recommended for those who like hard boiled period pieces as well as lovers of true crime. There is good detail on the facts and people involved in the Lindberg kidnapping. Like all the Heller novels, Mr. Collins has his own theory on what really happened. His theory here is really wild. A great book.

Published by Thriftbooks.com User , 21 years ago
This Nate Heller novel is the first to jump from Chicago mobsters to something more as Max Collins sends his PI to New Jersey to investigate the original Crime of the Century, the Lindbergh kidnapping. Along the way, Collins casts serious doubts on the man convicted of the crime, Bruno Haputmann, and offers a fictionalized but believable account of the investigation and the trial. Moreover, Collins also portrays Lindbergh with much less hero worship than the recent biography by Scott Berg. While this is not meant as a work of truth, Collins provides a necessary balance to such books with this novel.Most of all, though, it's a great read, suspenseful even though the ending is a matter of historical fact. This is a must for Collins fans, and it's great to see it reissued at last.
Trustpilot
Copyright © 2022 Thriftbooks.com Terms of Use | Privacy Policy | Do Not Sell My Personal Information | Accessibility Statement
ThriftBooks® and the ThriftBooks® logo are registered trademarks of Thrift Books Global, LLC