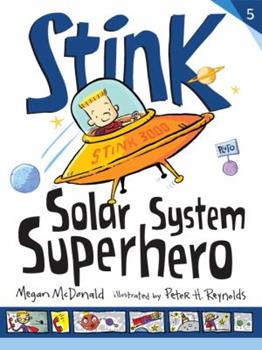 Save the planet . . . Pluto Stink Moody, wise-cracking champion of everything small, is on a new mission: to reinstate his favorite celestial orb.Look Up in the sky Is it a falling leaf ?A speck of dust? A speeding mosquito?No, it's Stink Moody, Solar System Superhero When Stink learns that Pluto has flunked out of the Milky Way for being too shrimpy, he feels like he might just explode with a Big Bang. Stink has no choice but to take a stand for...

Highly recommended for early readers, reluctant readers, or anyone who loves a good story

Published by Thriftbooks.com User , 12 years ago
When Stink Moody begins preparing for his science test the next day, he realizes he has to stuff his brain with facts about all the planets in the solar system. Stink only knows about Saturn, so he decides to get help from big sister Judy Moody. Of course, he's hoping Judy is in a good mood so she'll actually be helpful. Judy is busy plumbing her artistic talents by creating a masterpiece out of Already-Been-Chewed gum. At first she is reluctant to help her little brother study, but Stink manages to butter her up with some flattering words about her high intelligence. The deciding factor, though, is that Stink gives Judy permission to boss him around (everyone knows how much Judy enjoys that). Right away, Judy assists Stink by teaching him how to remember the names of all the planets. Of course, he is puzzled at first when she blurts out, "My Very Excellent Mother Just Served Us Nine Pizzas." When Judy explains that the first letter of each word represents a planet, Stink is awed by his sister's inventiveness. However, the next day's test results are a huge disappointment to the budding planet scholar. He learns that the Pizza in Judy's memory sentence is a problem. "P" may stand for "Pluto," but Pluto is no longer a planet, having been demoted by "the President of Outer Space" (at least according to Stink's version of the events). Stink is more disappointed than might be expected about Pluto's downgrading. He adores Pluto...and he relates to the smallest used-to-be-planet in the solar system. After all, Stink is the smallest kid in his class. Pluto is his second-favorite planet (he is loyal to Saturn), and he begins wondering what he can do to help this underdog ex-planet. Meanwhile, Nick, the new kid in school, and Stink bond over their mutual distress over "The Pluto Problem." Stink is excited about all the things he and Nick have in common, but is ecstatic when he finds out that Nick's nickname is "Skunk." What a coincidence! The two smelly-nicknamed boys put their heads together to come up with a new saying to remember the official planets plus the dwarf planets (that way, Pluto is not excluded again). Although Stink's teacher is impressed with the boys' mnemonic sentence, the class's know-it-all, Riley Rottenberger, seems determined to squelch their pleasure. Riley even wears a t-shirt dissing Pluto and tells jokes that put the poor ex-planet down. She thinks she knows everything about space because she attended Space Camp. Their disagreement leads to an interesting solution suggested by their teacher: a debate about Pluto. But can the "Pluto Heads" make their points about why Pluto should still be a planet against Team Kick Pluto's Behind's arguments against planethood? Filled with tons of fascinating facts about the planets, and funny and wonderful illustrations by Peter H. Reynolds (I particularly enjoyed the comics dedicated to each of the solar system's planets ) --- not to mention a lively plot starring likable Stink Moody --- S

Pluto's Been Kicked Out of the Solar System?!

Published by Thriftbooks.com User , 12 years ago
Reason for Reading: My son enjoys these books, his dad reads them to him at bedtime and I thought it was time I saw what they liked about these books so much. A totally enjoyable experience from start to finish! Stink is a regular kid, with regular kid problems and fears but when he gets an idea he becomes determined and full of spunk. Stink is flabbergasted when he gets his science test back and is told Pluto is no longer a planet, even Judy, his older sister, can't believe it. Stink gets his facts straight and insists that even if it is a "dwarf" planet then it still is a planet. When the resident Space expert in his class teases him and regales him with all the reasons why Pluto is not a planet, the teacher breaks in and explains that they both are right. Scientists took a vote to send Pluto packing, but some scientists still believe Pluto should counted as a planet. She then assigns Stink and "Space Camp" Riley to a debate the next week and their class will have their own vote on whether Pluto is a planet. A truly delightful book. As my first introduction to Stink, I was taken with him right away and can understand why my son enjoys his books so much. At the end of each chapter was a comic page with information about each of the planets in order based on the mnemonic saying "My Very Excellent Mother Just Served Us Nine Pizzas" which was very interesting and extremely humorous. I have to say I particularly liked the stance the author took on Pluto, acknowledging the ongoing debate, showing both sides equally. (I wish all books on science topics did the same!). An amusing and entertaining first chapter book, that could be read aloud to younger children and will hold the interest of older reluctant readers. I'll have to make sure I get books 1-4 read before another new one comes out as I won't be missing out on Stink's adventures any more!

Published by Thriftbooks.com User , 12 years ago
When your 8 year old ADD boy wakes up at 6am just to finish reading a book, you know it's a good one. He loves Stink & he loved this book too. He's read it twice now.

Published by Thriftbooks.com User , 12 years ago
Bought this for 2 of my grandsons who were anxiously awaiting it. They both read it in a day and loved it.

Published by Thriftbooks.com User , 12 years ago
My son is a HUGE Stink Fan. This is book 5 in the series about Judy Moody's brother, Stink. He has been waiting a long time for the next book to come out. It has been so long, that these books are below his reading level. He is 1/2 way through 3rd grade right now, and he finished this book in about an hour (or less). He still really enjoyed it, though. I heard him laughing A LOT while he was reading it. I recommend these books, to any child who enjoys funny, realistic fiction -but especially for boys who are reluctant readers, in 1st-2nd grade.
Trustpilot
Copyright © 2022 Thriftbooks.com Terms of Use | Privacy Policy | Do Not Sell My Personal Information | Cookie Preferences | Accessibility Statement
ThriftBooks® and the ThriftBooks® logo are registered trademarks of Thrift Books Global, LLC