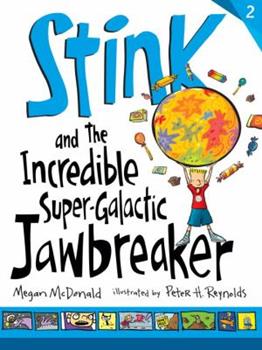 Stink and the Incredible Super-Galactic Jawbreaker

Spurred by a newfound awareness of false advertising, Stink Moody becomes the proverbial kid in a candy store as his letter-writing campaign yields him heaps of free rewards. When Stink buys a mammoth jawbreaker that doesn't break his jaw, he writes a letter of complaint to the manufacturer -- and receives a ten-pound box of 21,280 jawbreakers for his trouble This unexpected benefit of acing the art of letter-writing in school sure gets Stink thinking...

Published by Thriftbooks.com User , 13 years ago
Hi my name is Connor Z. and I think that Stink and the Super Galactic Jawbreaker by Megan McDonald is an awesome humor book! It's about a kid that has a jawbreaker. He gets mad because something happens to his jawbreaker. I am not going to tell you any more but I will tell you your kids will "love it"! It's good for grades 2 and 3 so go buy it!!!!!!

Published by Thriftbooks.com User , 13 years ago
This book is really cute. I teach 2nd grade and it is so fun for the boys to read. He is the silly little brother of Judy Moody. Great book and a good beginning chapter book too.

Published by Thriftbooks.com User , 13 years ago
I bought these books for my six-year old son, who is in first grade and he loves them. So many series have girls as main characters so to find a series with a boy as the main character is great. These books make him want to read instead of me making him do so. We can't wait for #5!

Published by Thriftbooks.com User , 15 years ago
Not only is the book about Judy's younger brother, Stink, but it's written for the younger reader as well. The type is larger and the book is not as long as the Judy Moody books. Again, perfect for a young reader. I love Judy Moody books as the dynamic of kids is really well written. Their behavior, thoughts, the things they say, everything, is well portrayed. In my opinion, far better than Junie B Jones books which uses way more advanced language than kids would use. In this book, Stink finds himself the benefactor of some free goods after writing a letter to the company to complain. This sets off a firestorm that pits Stink against his sister, and his best friend Webster. Good lessons are learned as Stink works through his problems. A great story.

My 5 year old loves this character

Published by Thriftbooks.com User , 15 years ago
Our 5 year old doesn't read this on his own yet, but the pictures are frequent enough, and the storyline engaging enough that he loves these "Stink"-y books. We buy them as fast as they come out. While the character is a few years older than our son, the writing is at a level that he clearly loves and understands. Each book teaches a lesson as well. Clean, fun, and simple entertainment in a book value.
Trustpilot
Copyright © 2022 Thriftbooks.com Terms of Use | Privacy Policy | Do Not Sell My Personal Information | Cookie Preferences | Accessibility Statement
ThriftBooks® and the ThriftBooks® logo are registered trademarks of Thrift Books Global, LLC