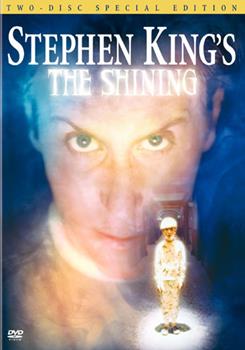 Jack Torrance (Steven Weber) and his family (Rebecca De Mornay and Courtland Mead) move into the sprawling, vacant Overlook Hotel to get away from it all. Away from the alcoholism that derails Jack's writing career. Away from the violent outbursts that mar Jack's past. But Jack's young son Danny knows better. He possesses a psychic gift called the shining -- a gift the hotel's vile spirits desperately want. In the hands of Stephen King, the "dead"...

Welcome to the horror hotel!

Published by Horror crazy , 1 year ago
I’m amazed at how many people complain about this miniseries these days. I saw this movie just after it was first advertised on TV and in TV Guide, the magazine that featured an article about the making of the movie, and why it was being done. I was thrilled to learn that it was being remade, and that Stephen King was writing the teleplay. I had just finished the book a week earlier, and I loved it! I had seen the original movie hundreds of times before reading the book, and until I read it, I had always thought that the classic 80s movie was awesome! After reading the book, however, I was disappointed with that movie, and hoping(and wishing) that someone would remake it, someone who cared about doing a faithful adaptation. So, when I first read about the miniseries that would soon air, I was totally excited! And I wasn’t disappointed!!! I’ll admit it: When everyone complains about the poor special effects that were used to bring the hedge animals to life, they’re right. The effects for most of these scenes suck: The CGI that was used to make these creatures seemingly come to life and move around actually makes them look fake. Other than that, the special effects are awesome! These may be TV grade effects, but they are used well, creating ghosts and zombies that look amazing, giving viewers some horrendous scenes of supernatural terror! The acting is also really good. In a few scenes, it could have been a little better, but with the exception of one scene where only the actors’ voices are heard, Steven Weber and Rebecca De Mornay steal the show with their performances as two of the lead characters! I also love the fact that the movie was shot at the Stanley Hotel, where Stephen King was inspired to write his classic chiller! It makes it feel very authentic that these eerie, horrifying events are unfolding in the beautiful, but isolated, fictional Overlook Hotel! A chiller is exactly what this creepy, frightening miniseries is! If you love Stephen King’s masterpiece of horror and you’re looking for a great adaptation, don’t buy the whining you hear from most about this one. See it for yourself. Who knows? You just might find another Stephen King favorite to add to your horror movie collection!!!⭐️⭐️⭐️⭐️⭐️
Copyright © 2020 Thriftbooks.com Terms of Use | Privacy Policy | Do Not Sell My Personal Information | Accessibility Statement
ThriftBooks® and the ThriftBooks® logo are registered trademarks of Thrift Books Global, LLC