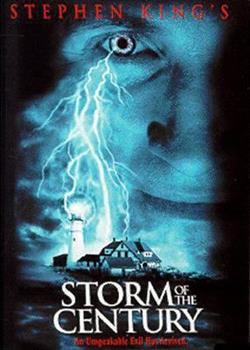 A series of bizarre murders hit a town off the coast of Maine when it is cut off from the rest of the world by a severe snow storm.Genre: HorrorRating: PG13Release Date: 22-JUN-1999Media Type: DVD This description may be from another edition of this product.

If you love Stephen King, if you love horror movies, this miniseries is for you!

Published by Horror crazy , 2 years ago
Storm of the Century is one of those rare instances of Stephen King writing a screenplay that would actually be produced. Since the author loves miniseries as much as his fans enjoy watching his miniseries, it’s no surprise that this movie is a three-part miniseries. But it’s a good one! The small Maine island of Little Tall Island doesn’t know what hits it when a stranger named Andre Linoge arrives mere hours before a massive winter storm is scheduled to come. The residents only know that he’s evil, considering he has brutally murdered the island’s oldest living resident, Martha Clarendon. They have no idea how right they are! Linoge isn’t human—he’s a demon in human disguise! The islanders are horrified when Andre Linoge reveals that he somehow knows their worst sins, the terrible secrets they have each always been too ashamed to tell anyone about. But that’s not the worst part of the horror the sinister stranger brings with him! During the course of those dreadful three days, many more violent, gruesome deaths will befall the island, some of them murders, some of them suicides. At the scene of each blood-soaked tragedy, the same simple, yet cryptic message is left behind: “Give me what I want and I’ll go away.” But what does Andre Linoge want? During the film’s final half-hour, viewers and the residents of Little Tall Island will both learn the answer—and it will leave everyone horrified and shaken! I love a good horror miniseries, especially from Stephen King! If you do, too, you’ll love every minute of this heart-stopping nightmare!
Trustpilot
Copyright © 2022 Thriftbooks.com Terms of Use | Privacy Policy | Do Not Sell or Share My Personal Information | Accessibility Statement
ThriftBooks® and the ThriftBooks® logo are registered trademarks of Thrift Books Global, LLC