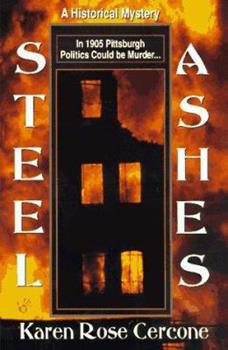 In the Pittsburgh of 1905, the burning of a rundown tenement and the deaths of two poor immigrants barely make the evening papers. But there are two courageous figures who refuse to let the murders go unsolved. One is the detective handling the case. The other is a social worker. Apart, they can barely scratch the surface of Pittsburgh's corrupt political machine. Together, they fight the discrimination that threatens to forever shield a sinister...

Published by Thriftbooks.com User , 23 years ago
The first thing I look for in a mystery is a well-crafted character; I find this in the works of the greats: Raymond Chandler, James Lee Burke and Walter Mosley. The second is a believable and absorbing atmosphere; again, one finds these in abundance in the works of these writers. Karen Rose Cercone is now another author I can add to the list. "Steel Ashes" is a wonderful book, and its sequel is even better. As a professional social worker who works with the poor, it is very gratifying for me to see a heroine who is also a social worker (something she denies in the book's sequel, but is nonetheless) at the very dawn of the social work profession. In the character of Helen Sorby, Cercone has crafted a heroine who is admirable and very real; not a few readers will, I suspect, fall head over heals for her. The book's context illustrates the injustices of industrialism at the beginning of the twentieth century, reminding us that economic change (with which we are always contending) always brings with it human suffering. By placing the action in a time when few people believed that such suffering should be alleviated by the government (much like our own time), Cercone is able demonstrate the misery that occurs when such inaction is tolerated. These are the kind of injustices that brave reformers like Helen will not tolerate. Helen's idealism is tempered by the worldly-wise Milo, a policeman who has had to conceal his Armenian heritage in order to become a cop. Milo is, like Helen, a victim of the prejudice of society; but like her, he refuses to be content with whining about it as an excuse for inaction. Even so, the differing responses of the two protagonists -- and their irresistable attraction to each other -- are what give the series its dramatic tension. The fact that then, as now, the book highlights very real and very current social problems is what makes it, like the work of Burke and Mosley and Chandler, more than just another mystery.

Published by Thriftbooks.com User , 23 years ago
A delightful first mystery by Cercone on the Steel City and some of its less than wealthy residents at the turn of the century. The mystery was suspenseful but more to my liking, the sparks really flew between Helen Sorby and Milo the police officer. Definitely awaiting the sequel.

Published by Thriftbooks.com User , 24 years ago
This was a fantastic book. It was different and fascinating because of the year it took place and what you learned about early Pittsburgh. It was great because of the wonderful characters, and it was fantastic because it was a mystery that kept you guessing until the very end. I would highly recommend this book.

Published by Thriftbooks.com User , 25 years ago
As a Pittsburgher, I really appreciated the accuracy and love of the city portrayed throughout the book. Cercone really captures the spirit of the immigrant populations, as well as the day-by-day details of Pittsburgh's industrial past. Delightful characters and a clever mystery just make the read more pleasant. A must-have for historical mystery fans AND for Steel City dwellers who love this place and its past.

Published by Thriftbooks.com User , 25 years ago
I read this book more than once and continually look for a sequel. The characters are likeable, the dialogue is smart and funny, and a potential romance is suggested between two of the main characters. Violence is minimal but suspense lurks around every corner, steadily builds throughout the story, and drops you into the ending where you are unable to put the book down until you know for sure how everything and everyone turns out. Highly recommended.
Trustpilot
Copyright © 2022 Thriftbooks.com Terms of Use | Privacy Policy | Do Not Sell My Personal Information | Cookie Preferences | Accessibility Statement
ThriftBooks® and the ThriftBooks® logo are registered trademarks of Thrift Books Global, LLC