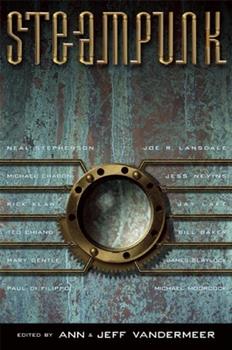 (Book #1 in the Steampunk Series)

Published by Thriftbooks.com User , 12 years ago
Steampunk is a neat niche subgenre, a melding of Jules Verne-esque, Victorian era scifi with some modern sensibilities and other anachronisms. This anthology is a nice intro to the field. Among my favorites here are the excerpt from Michael Moorcock's novel, WARLORD OF THE AIR, and the short stories "Lord Kelvin's Machine" by James P. Blaylock and "The Steam Man of the Prairie and the Dark Rider Get Down: A Dime Novel" by Joe R. Lansdale (the latter an extremely graphic and nasty deconstruction, but unarguably unforgettable.) The stories are pretty representative of the field. I didn't like all of them, but that's pretty commonplace for any reader when you're reading an anthology of stories by many different authors. If you're at all curious about steampunk, this primer is a good starting point.

A fine gathering of 'steampunk' writings

Published by Thriftbooks.com User , 13 years ago
Neal Stephenson, Joe R. Lansdale, Mary Gentle, Paul di Filippo and other notables are featured in a fine gathering of 'steampunk' writings. The genre pairs Victorian images with modern technology - such as steam-driven robots and space-faring dirigibles. A satisfying blend of technology, Victorian plots and romance and compassion mark stories that hold many delightful scenes, and are hard to put down. Diane C. Donovan California Bookwatch

Published by Thriftbooks.com User , 14 years ago
This book is an excellent set of short stories with a steampunk, Victorian era theme to them. Some of the stories are from larger volumes of works like Lord Kevin's machines. All in all a wonderful read and some great background on the steampunk literary genre.

An effective overview of the genre

Published by Thriftbooks.com User , 14 years ago
For those who aren't familiar with steampunk, it's sort of hard to define. I would loosely describe it as people running around a retro-futuristic, usually Victorian society employing improbable weapons and machinery powered by steam and clockwork. The back cover claims "Steampunk is Victorian elegance and modern technology: steam-driven robots, souped-up stagecoaches, and space-faring dirigibles fueled by gaslight romance, mad scientists, and very trim waistcoats," which does give a pretty good idea of the sort of things you're likely to find in the anthology. To break it down: Introduction: The 19th Century Roots of Steampunk (Jess Nevins) - This essay covered a lot of things regarding steampunk's relationship with and reaction against dime novels that I hadn't heard before, making several of the stories in the anthology make a lot more sense. I think most of Nevins's arguments primarily apply to steampunk literature and don't necessarily cover its other aspects, but it's very interesting and useful information. Benediction: Excerpt from The Warlord of the Air (Michael Moorcock) - I don't really approve of including excerpts from novels in an anthology, using the reasoning that if I've just bought a book, I would rather have an entire story than an extended advertisement for another book. This is a good introduction to the steampunk feel, though, as it's basically one extended airship battle. Lord Kelvin's Machine (James P. Blaylock) - This is one of those that is helped by the explanations in Nevins's essay; it's heavily based on the dime novel tradition, although with a wink and a nod. An inventor must use his ingenuity to save the world both from a villain and from his well-meaning but foolish compatriots in the face of a deadly comet. The Giving Mouth (Ian R. MacLeod) - While this story really didn't even try to make sense by the end, the world it's set in is fascinating - I've never heard of medieval steampunk before, but I absolutely adore it. A Sun in the Attic (Mary Gentle) - A woman's husband (or one of them, anyway, as the story takes place in a polyandrous society) uncovers something that some feel the world may not need to know; the story questions the positive and negative aspects of scientific discovery and humanity's reactions to it. The God-Clown is Near (Jay Lake) - A strange story about an inventor who is asked by a shady organization to build a "moral clown", an automaton that will pass judgment on their society. I think the world it's set in is part of a series by the author, and I'm tempted to track down one of his books; I liked the story well enough, but it seems to lack the context that would ground it a little and give it some weight. The Steam Man of the Prairie and the Dark Rider Get Down: A Dime Novel (Joe R. Lansdale) - I have to say, this story goes against pretty much all of my personal preferences. The idea isn't bad - that the Time Traveler from H.G. Wells's The Time Machine accidentally damaged the spac
Trustpilot
Copyright © 2022 Thriftbooks.com Terms of Use | Privacy Policy | Do Not Sell My Personal Information | Accessibility Statement
ThriftBooks® and the ThriftBooks® logo are registered trademarks of Thrift Books Global, LLC