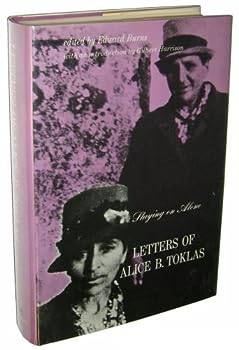 Staying on Alone: The Letters of Alice B Toklas

by Alice B. Toklas

This description may be from another edition of this product. On tissue-thin paper in a tiny, often undecipherable hand, Alice Toklas described her daily life in Paris in absorbing detail, like a latter-day Madame de S vign . Here are shrewd, witty observations...

Published by Thriftbooks.com User , 12 years ago
Here we have a nice pairing to What Is Remembered. If you happen to be a fan of Gertrude Stein memorabilia, either book will provide the reader with retrospective insight on Alice B. Toklas, Stein's lifelong companion. Gertrude Stein died in 1946, 20 years before Alice B. Toklas met her own end -- the personal letters in this nicely illustrated volume (over 400 pages) are chiefly the ones that Alice wrote to numerous people of note subsequent to Stein's death. The earlier-period Toklas letters are not included here. Toklas was a remarkable lady and one would be hard-pressed to unearth a friend who was more devoted to her companion. Anyone who said something negative about Stein was immediately relegated to Toklas' lengthy S***-list. Much of the correspondence here (maybe 40%) was sent to her mentor of sorts, Carl Van Vechten and his lovely wife Fania. Other letters went to people like Sir Francis Rose, Brion Gysin, and so on, often yielding unique insights on Stein's and Toklas' numerous acquaintances and friends such as Picasso, Juan Gris, Virgil Thomson, and many other people of historical significance. Documentation of the escalating feud between Toklas and the Stein family subsequent to Gertrude's death also provides great trivial fodder for the reader's consumption. Toklas and Stein lived chiefly in Paris during the first half of the 20th Century, even though both were Americans -- they even stayed on in dangerous (and sometimes occupied) areas of France during WW I and WW II. Both ladies were controversial, especially Stein who was clearly the more famous of the two. The reader is treated to personal insights on the books of Stein, Toklas, and of their friends and enemies, including: The Alice B.Toklas Cookbook (which includes in the First English Edition, 1954, Brion Gysin's infamous recipe for "Hashisch Fudge"!), WHEN THIS YOU SEE REMEMBER ME; GERTRUDE STEIN IN PERSON, and Gertrude Stein : Her Life and Work. The author of the latter book became a target of much venom by the blunt Toklas as did Kathrine Ann Porter, author of Ship of Fools. I think sex is only mentioned one time in all the letters found here and, of course, that was a taboo topic for any of the select notables who were permitted into the Stein/Toklas household. Toklas also yielded up some searing opinions of certain celebrities who had, at one time or another raised her sensitive hackles. Hemingway was a favorite target even though Toklas generally liked him. If you're planning to make either a major or minor study of Stein and/or Toklas, this book would not be a good starting point. One really needs to have read quite a lot about the friends and acquaintances of the two (even though there are footnotes about many of the people mentioned) in order to digest what Toklas is talking about in these interesting letters with any real comprehension. Perhaps this selection would represent a better springboard for Stein/Toklas study: The Autobiography of Alice B. Toklas, (this
Copyright © 2020 Thriftbooks.com Terms of Use | Privacy Policy | Do Not Sell My Personal Information | Accessibility Statement
ThriftBooks® and the ThriftBooks® logo are registered trademarks of Thrift Books Global, LLC