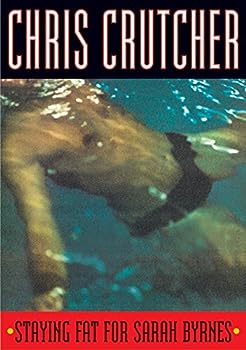 This description may be from another edition of this product. Called a "masterpiece" in a starred review from School Library Journal, award-winning author Chris Crutcher's acclaimed Staying Fat for Sarah Byrnes is an enduring classic. This bestselling novel is...

Published by Thriftbooks.com User , 19 years ago
Chris Crutcher has tapped into the teenage psyche for this one. This is a most confusing time in any person's life: you are just starting to deal with certain issues (sex, fitting-in, questioning religion, et cetera), and you may be angry and don't know exactly why. I remember my teenage days quite vividly and have found that I can relate to this story on certain levels. This is a story about Eric "Moby" Calhoune, a so-called fat kid, who bonds with Sarah Byrnes, an outcast burn victim. They form a friendship that is tested on many occasions by Sarah's inability to face her past and her relationship with her father (Mr. Byrnes is one of the most evil characters I have ever encountered in literature). Soon things get dangerous for both Sarah and Moby, but I won't divulge anymore details. You must read the book to find out what happens.I will only say that while this book centers on abuse (in many forms), it also deals with a wider range of teenage problems. What is so profound about this story is that it could happen, it may have even happened to some of us or someone we know. It's truthful and realistic. Be careful. It may hit you hard when certain things are revealed. If you tend to cry while reading books or watching films, you might want to have a tissue handy when you sit down with this one.

Smart stuff for teens-what a relief

Published by Thriftbooks.com User , 21 years ago
This book spoke to me from the shelf, so I picked it up, not knowing what I'd find. I found an intelligent and witty novel that is gripping from the first chapter. Sarah Byrnes, a tough, intelligent girl, is forced through life with the burden of her scarred face and maniacal father. Eric "Moby" Calhoune, an overweight swimmer, is her best friend, who has to deal with the knowledge of her secrets. Behind the main plot are a controversial bunch of debaters-Ellerby, the liberal preacher's son who challenges all Bible thumpers in style, Ms. Lemry, the strong-opinioned teacher and coach who fosters heavy debate in her classes, Mark Brittain, the overzealous pressured persuer of conservative Christian values EVERYWHERE, and Jody Mueller, who is torn between enforced beliefs and her life's hard facts-who are looking for the balancing point in a world of clashing beliefs.The crafted debating of abortion and values rings true if you've ever witnessed the real thing. Somewhere amidst the fight between libral choice and conservative value and struggle of survival for the teens, a happy(yet realistic)ending emerges.A strong plotline and strong sense of humor make this book good, but Crutcher's strong characters are what make it great and worth reading. Eric, Sarah, Ellerby, Ms. Lemry, Mark, Mr. Ellerby, Mr. Mautz, Jody, and Dale are all complex and have a story or motive or simply an aura that makes the reader want to know more and more. A really, really strong recommendation for this one, folks.Oh, yes: Ellerby's celebrated Christian Cruiser, a pale blue with airbrushed clouds station wagon that blasts Mahalia Jackson at full volume and states, "The wages of sin are a buck fifty", deserves an extra commendation. Such creativity.

Published by Thriftbooks.com User , 21 years ago
The question I get asked most often has got to be, "So what's your favorite book?"It's a tough one to answer, because there are so many wonderful books out there. But when all's said and done, I think I have to go with "Staying Fat for Sarah Byrnes," by Chris Crutcher.Overweight Eric "Mobe" (as in "Moby") Calhoune and burn victim Sarah Byrnes united during junior high because of their shared "terminal uglies," fighting off bullies and insidious school faculty, to name a few.Now in high school, Mobe's an athlete on the swim team, despite his efforts to remain plump and preserve his treasured friendship with Sarah Byrnes (sick of every idiot calling attention to her condition and her last name, she makes everybody call her by her full name).When she winds up in the psych ward, the story launches into something both horrifying and heart wrenching: When Sarah Byrnes was three, her abusive father Vergil held her face to a hot stove.Mobe's got to find a way to protect her from her father and bring her back into reality.It's a truly gripping tale, one that will have readers on the edge of their seats. Vergil Byrnes is by no means an ordinary villain; he is a monster. But Crutcher doesn't simply stop with Sarah Byrnes' saga.On the sidelines, but no less important, is the story of Mobe's rivalry with Mark Brittain, a fellow swimmer. Mark is hardcore religious, while Mobe's more accepting and easygoing. It's fascinating to watch such different individuals with so different beliefs go head to head, whether in the pool or in their debate class, Contemporary American Thought.It's heavy stuff, but Crutcher adeptly balances it by giving his characters the ever welcome gift of sarcasm. The humor is a welcome counterbalance to such controversial taboos as abortion, religion and censorship. Virtually every line is one that will make you howl with laughter, even as you are moved to tears by the characters' plights. This, my friends, is real life.And what characters there are! Besides the aforementioned few, Eric's mother is a delight, the very picture of hip maternal instincts, and her geeky boyfriend Carver ultimately proves heroes can come in surprising packages. Ellen Lemry, Mobe's swim coach/CAT teacher/adviser is a force to be reckoned with.But my hero is Steve Ellerby, an enigma in and of himself. Son of a preacher and a choir boy, he also possesses an obnoxious blue car and what some would consider a sacrilegious personality. He's acerbic, he's disrespectful, he's fun.And he has the best scene in the book, but race through it and you'll miss it when Brittain kneels at the pool side to lead his teammates in prayer: "Ellerby drops to both knees, throwing his head back as he stretches his arms wide, and loudly begs Jesus to come swim the laps for him. When there's no answer, he opens one eye to a squint and asks if John the Baptist is home. `Damn,' he says in the face of no response."In fact, "Staying Fat" is frustrating be

Published by Thriftbooks.com User , 22 years ago
I have to admit, when I first saw this book I thought it was going to be another badly written, melodramatic sports novel. Eventually, my curiosity and boredom got the better of me and I read it. By the time I had finished, I had realized how completely wrong I was. Unlike most "young-adult" literature, the characters aren't all gorgeous and popular, which makes them seem infinitely more realistic. Sarah, Moby, and Ellerby (3 of the major characters) are smart, funny, and not drips either, which tends to be rare in books written by adults about people their age. I think it's pretty cool that the author isn't afraid of swearing or making his characters sarcastic or cynical in places -- it makes the average "young adult" more able to relate. I noticed some people complaining that the fundamentalist Christian characters are a little too stereotyped. Maybe so, but I've actually met people like them a few times, so they don't seem so cartoonish to me. I recommend this book to all teenage misfits who are sick of the perfect people in most novels for people their age.

Without doubt, a must read!

Published by Thriftbooks.com User , 23 years ago
No book has ever captivated me as much as this one. Staying Fat for Sarah Byrnes is a fiction. yet realistic book written by Cris Crutener. The characters of this book are strong characters that contribute to the greatness of this book. Eric Calhoune, a senior, faces the task of helping close friend, Sarah Byrnes, who was burned in an accident. Sarah's dad, her problem, is not necesaraly someone you'd like to be friends with. Eric faces other small, bothersome problems. The biggest of them all, Mark Brittain, a fellow classmate who constantly lectures everyone on his strong catholic believes. The only thing Eric doesn't despise form Mark is his girlfriend, Jody Mueller Mrs. Lemry, a strong character, is Erics swimming coach and CATS teacher. Eric tries to help Sarah overcome a psycological problem, by visiting her at the psycological center. Soon, he finds out a dark secret Sarah has kept from everyone for a long time. He then becomes involved in a constant fight to keep Sarah safe. This book came to me when i wasn't sure if I still enjoyed reading. Lately, as a student i have not been able to choose the books I wanted to read, and wa not enjoying reading. Choosing this book was not easy. Mainly, I thought I was going to have to face another boring book. I was wrong. As I read the first pages, I found myself cought up in the plot. Without realizing it I finished, what was perhaps, one of the best books I ever read. It's true that this book involves the same kind of drama many books involve, but something about it is different. it has this special thing that seperates it from other books. You will not encounter a language that is boring or too elegant. The language is realistic and so real that young people will have no trouble reading and understanding it. The author has not avoided using bad words: there are plenty that give this book a realistic tough. The characters don't talk like stuffy old people, but like everyday people, making this book even better. This book is great and not a moment! boring, once started it can be diffiult to stop. This book is perhaps the best ever. The author has known how to write a funny, entertaining, realistic book. It doesn't fall in the same category as those books htat constantly repeat the same ending as they all lived happily ever after. Without doubt, this book is a 10!
Copyright © 2020 Thriftbooks.com Terms of Use | Privacy Policy | Do Not Sell My Personal Information | Accessibility Statement
ThriftBooks® and the ThriftBooks® logo are registered trademarks of Thrift Books Global, LLC