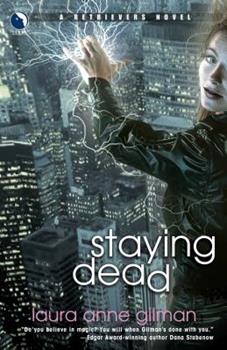 (Book #1 in the Retrievers Series)

A great book in a promising new line

Published by Thriftbooks.com User , 16 years ago
Gilman's offering to the new Luna line says clearly that these books are not going to be cheesy romance, trumped up by the publishers of Harlequin books. This was a tense, snappy, inventive book. Gilman creates an edgy urban fantasy that sizzles with energy. The relationship between Wren and Sergei had just the right amount of tautness and uncertainty. Added to the usual nervousness about disrupting a friendship, the two are also successful business partners. That being the case, they are doubly careful to keep from ruining the delicate balance of their relationship. The mystery element is strong, the fantasy/magical element is well defined and established in the book. Gilman even includes a "history" with founding father Ben Franklin (check out the Luna website for more info). The story runs smoothly and manages to come to a good conclusion. Though this is to be a series, the author doesn't need to string the reader along with a cliff hanger. The strong characters and interesting world will be enough to have readers returning to Gilman's world. If you liked this book, check our Gilman's story in the Powers of Detection short story collection along with favorites like Anne Bishop, Simon R. Green, and Sharon Shinn.

Published by Thriftbooks.com User , 17 years ago
I bought this book after seeing the author speak at Worldcon in Boston. She and her partner in self promotion, Keith DeCandido, had a pretty amusing schtick going, so I figured I'd buy both their books. Gilman has written a great book here. I actually didn't like the opening few pages and darn near put it down -- but I was reading it on a plane, so I soldiered on. I'm glad I did. Within a few more pages I was hooked, and it really gathered steam as it went. Wonderfully developed lead characters, with well done romantic subplot (a feature that rarely interests me in a book). I think what I like best about it is that it offers a fully formed vision of an alternate New York where magic works and demons wander the streets, complete with prejudice, fanaticism, greed, foolishness and all those other human traits. Promises to be the start of a series, so more good stuff to come.

Wonderful..."Moonlighting" meets "the world of Magics!

Published by Thriftbooks.com User , 17 years ago
This book is a wonderful melange of "Moonlighting"-esque characters set in a richly dark shadow-world of Magic. The world we all exist in has so many other layers in Laura Anne's book, one hardly knows where it will take one next. The interplay between Wren and Sergei promises much more to come, and will be interesting watch develop in future "Retrievers" novels. Her interesting ideas regarding electricity and magic are a nice twist on the genre's norms, and Laura Anne shows an excellent mind for future development both in her characters lives, as well as the world she has created. Well done, and not only worth a read, but anticipation for more follow-up books!

Published by Thriftbooks.com User , 17 years ago
STAYING DEAD is a gleefully charming book full of characters you'd love to sit down and have a beer with. While the plot and the world-building are all top-notch, what makes this book crackle is the chemistry between Wren Valere and her partner/manager/sexual-tension-bunny Sergei Didier. This is a very auspicious novel debut for a pair of characters who are already the subject of several fine short stories, and should continue to please in future "Retrievers" novels. Brava!

Published by Thriftbooks.com User , 17 years ago
In a world in which most people believe that magic doesn't exist, there remains a sub-culture of Talent thriving. These folks use their powers in a way that keeps them hidden from the unbelievers. Wren Valere is a Retriever, a talent who locates things that have been missing for people who do not want the police involved. She returns the missing object to its owner for a fee negotiated by her partner and agent Sergei Didier. Both Sergei and Wren are loners who make a very good team professionally and personally even though neither wants to admit their feelings for one another. A cornerstone with a spell of protection has been stolen from the Fronts building and the owner wants to get it back. Wren and Sergei intend to retrieve it from the collector who hired a rogue mage to steal the spell. Before they can accomplish the deed, they also must deal with a ghost that was freed when the spell was stolen. If Sergei and Wren want to collect their fee, they have to stop the runaway spirit, who is intent on revenge Fans of Laurell K. Hamilton, Tanya Huff and Mercedes Lackey are going to love STAYING DEAD, a romantic fantasy that stirs the senses and creates a story that is both fulfilling and magical (no pun intended). Laura Anne Gilman makes the reader believe that magic exists and creatures of myth and legend inhabit the earth. It will be very hard to wait for the next Retriever's novel coming in the summer of 2005 because Laura Anne Gilman has cast quite a spell on readers. Harriet Klausner
Copyright © 2020 Thriftbooks.com Terms of Use | Privacy Policy | Do Not Sell My Personal Information | Accessibility Statement
ThriftBooks® and the ThriftBooks® logo are registered trademarks of Thrift Books Global, LLC