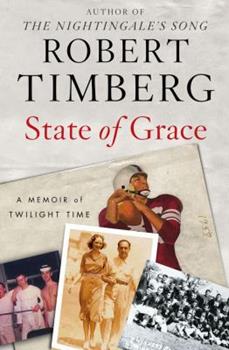 State of Grace: A Memoir of Twilight Time

From the author of the critically acclaimed The Nightingale's Song ("An amazing piece of work...This is a stunning book" -- Boston Globe), comes an evocative, elegiac and rollicking portrait of America. The Nightingale's Song was Robert Timberg's extraordinary tale of well-intentioned but ill-starred warriors. In State of Grace, his long-awaited new book, he revives the powerful themes of courage, manhood and loss in a strikingly personal exploration...

Published by Thriftbooks.com User , 15 years ago
As a former Lynvet, I attended many of the ganes highlighted in the book. Additionally I knew so many of the players mentioned who were a few years older than my friends and I. A few even were our coaches as we moved through the Lynvet organization. These flawed heroes modeled some risky behavior that many of us idolized. Consequently some of us followed in their troubled footsteps. And yet, the strength of character that they also modeled motivated recovery as well. The quasi-hero, Larry Kelly was responsible for many success stories including my own for which I could never repay him. I say a prayer of gratitude to him and all the fascinating old friends that the author recalls. Jim Matthews, M.Ed. [...]

Published by Thriftbooks.com User , 16 years ago
As an ex-Lynvet player and Annopolis grad, I thouroughly enjoyed "State of Grace." Mr. Timberg successfully brings you back to a much more difficult, but, in many ways, a simpler time. He provides vivid and colorful descriptions of his teamates and the challeges that they faced while entering adulthood. "State of Grace" is a timeless book about young men living difficult lives, by today's standards, and through football and comraderie find their ways through life. I recommend this book to everyone, but especially to teenagers and their parents.

More than a football story

Published by Thriftbooks.com User , 17 years ago
This book will appeal to anyone who grew up in the 50's/60's, especially in the New York area. The football aspect is a thread; the focus is on coming of age and the changes in society that took place in that era. It was a personal bonus to me in that I knew the Stuyvesant High School folks mentioned in the book. They were a special breed, dealing with long commutes to school & practices while succeeding in one of the most academically challenging high schools in the U. S.

A book worth reading

Published by Thriftbooks.com User , 17 years ago
As I came to know the Lynvets in State of Grace, I found myself caring about each and every one of them while rooting for them to succeed in the games of football and life. Robert Timberg comes across as an uncomplaining, grateful warm human being who appreciates the hardships of his life for the lessons they taught him, and the good things that happened to him and his buddies for the rewards they brought for trying. Unlike Frank McCourt , who, in "Angela's Ashes" and "Tis" constantly complains about his life growing up and shows very little appreciation for the good life that this country has given him. He should take a lesson from Timberg, whose book is equally as good, who loves his country and his fellow man. It was wonderful to read about the bond between the Lynvets and the competitions that helped almost everyone to mature to his potential. Despite a surface knowledge of football I thoroughly enjoyed "State of Grace", and the plays are so well described that it doesn't take much familiarty with the game to get involved and root for the Lynvets. I highly recomment reading this book. I. C. Lefferts - Litchfield, CT

A memoir for all times

Published by Thriftbooks.com User , 18 years ago
This memoir will never be dated. The son of a Ziegfield girl and an aspiring songwriter Timberg's book has you rooting for him from the beginning as challenge after challenge threaten to keep him down. He pulls himself into manhood and takes us with him in this superbly crafted work. His goal, Annapolis, is preceded by two years of trying to obtain an appointment. During this interregnum, he joins a sandlot football team made up of good, sometimes errant, boy/men wondering about destinies. A page turner. S.D. Segalini Falmouth MA
Trustpilot
Copyright © 2022 Thriftbooks.com Terms of Use | Privacy Policy | Do Not Sell My Personal Information | Cookie Preferences | Accessibility Statement
ThriftBooks® and the ThriftBooks® logo are registered trademarks of Thrift Books Global, LLC